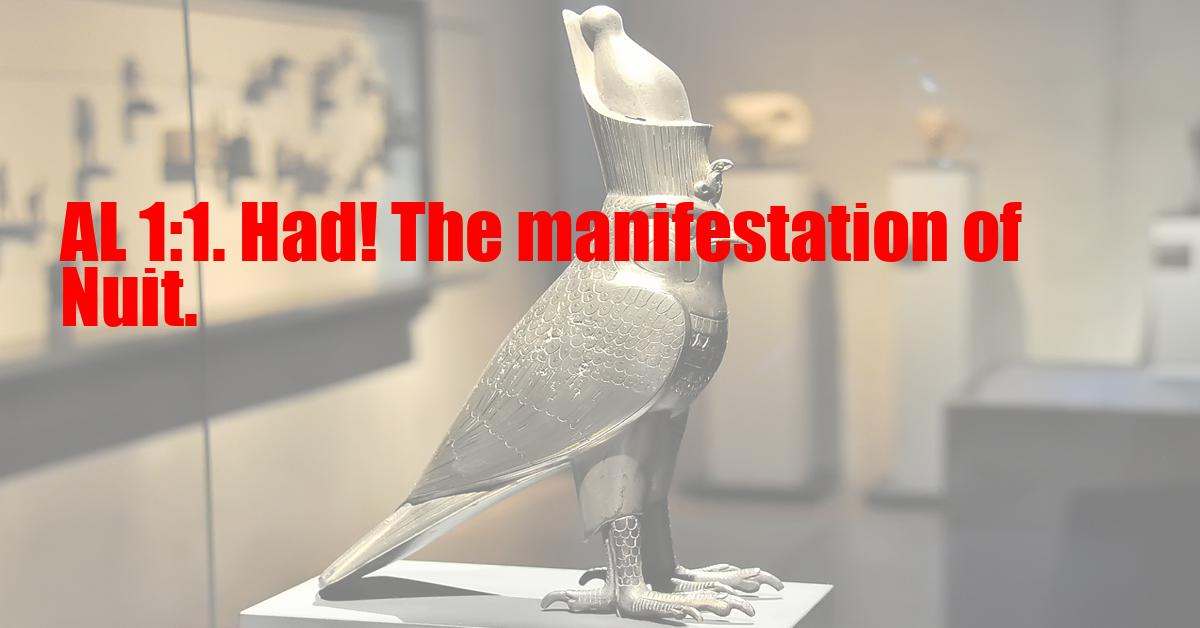 The number 700 in the bible is a nod at both the seven palaces that God used to create the heavens and the earth, and the seven days of creation. With Liber AL vel Legis Crowley is attempting to create a book intended to replace the book of Genesis, and a system intended to replace Abrahamic religions. The English title of the Book of the Law reflects this too, as HThVRH [The Torah] = 220, and Torah is the Hebrew word meaning Law. The ‘AL’ (31) from the title of the Book is transliterated Hebrew for God [El], and among the Canaanites he was the chief creator God. The children of El were called the Elohim, the eldest being Hadad who lived in the seven palaces of his Father. It should also be noted that by Reversal Cipher YHVH = 220, and that the Book of the Law has 220 verses.

Had! The manifestation of Nuit.

The Djeridensis Comment
Nuit defined.
Nuit is all that may be, and is shewn by means of any one that is.

Tunisia Diaries
The possibilities of existence can only be manifested through the experience of individuals.

The Old Comment
Compare II.1, the complement of this verse. In Nu is Had concealed; by Had is Nu manifested. Nu being 56 and Had 9, their conjunction results in 65, Adonai, the Holy Guardian Angel. Also Hoor, who combines the force of the Sun with that of Mars. Adonai is primarily Solar, but 65 is a number sacred to Mars.
See the "Sepher Sephiroth", and "The Wake World" in "Konx Om Pax" for further details on 65.
Note moreover, the sixty-five pages of the MS. of Liber Legis.
Or, counting NV 56, Had 10, we get 66, which is (1-11). Had is further the centre of the Key-Word ABRAHADABRA.

The New Comment
The theogony of our Law is entirely scientific, Nuit is Matter, Hadit is Motion, in their full physical sense.«The Proton and the Electron, in a metaphysical sense, suggest close analogies.» They are the Tao and Teh of Chinese Philosophy; or, to put it very simply, the Noun and Verb in grammar. Our central Truth – beyond other philosophies – is that these two infinities cannot exist apart. This extensive subject must be studied in our other writings, notably "Berashith", my own Magical Diaries, especially those of 1919, 1920 and 1921, and "The Book of Wisdom or Folly". See also "The Soldier and the Hunchback". Further information concerning Nuit and Hadit is given in the course of this Book; but I must here mention that the Brother mentioned in connection with the "Wizard Amalantrah" etc. (Samuel bar Aiwaz) identifies them with ANU and ADAD the supreme Mother and Father deities of the Sumerians. Taken in connexion with the AIWAZ identification, this is very striking indeed.

It is also to be considered that Nu is connected with North, while Had is Sad, Set, Satan, Sat (equals "Being" in Sanskrit), South. He is then the Sun, one point concentring Space, as also is any other star. The word ABRAHADABRA is from Abrasax, Father Sun, which adds to 365. For the North-South antithesis see Fabre d'Olivet's "Hermeneutic Interpretation of the Origin of the Social State in Man". Note "Sax" also as a Rock, or Stone, whence the symbol of the Cubical Stone, the Mountain Abiegnus, and so forth. Nu is also reflected in Naus, Ship, etc., and that whole symbolism of Hollow Space which is familiar to all. There is also a question of identifying Nu with On, Noah, Oannes, Jonah, John, Dianus, Diana, and so on. But these identifications are all partial only, different facets of the Diamond Truth. We may neglect all these questions, and remain in the simplicity of this Her own Book.