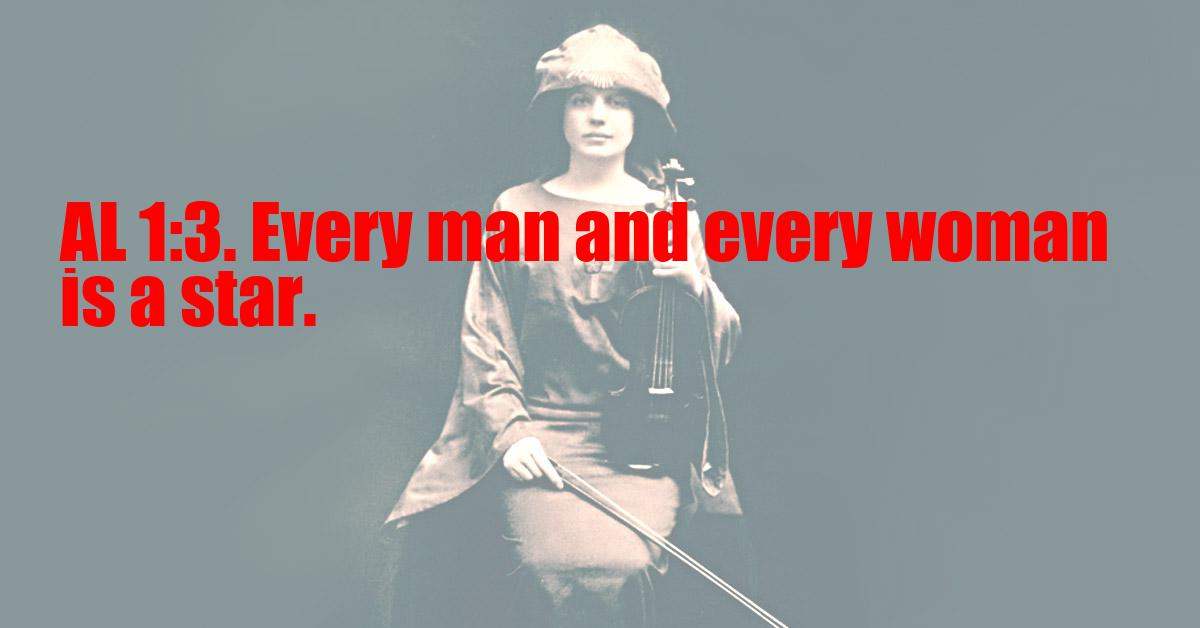 Every man and every woman is a star.

The Djeridensis Comment
(3-4.) Virtues of the Soul.
All things are able to know all; all are alike in this, at the end of all.

The Old Comment
This should not be understood in the spiritualistic sense. It means that in each person is the sublime starry nature, a consciousness to be attained by the prescribed methods.
[Yet it may mean some real connection between a given person and a given star. Why not? Still, this is not in my knowledge. See: Liber 418.]

The New Comment
This thesis is fully treated in "The Book of Wisdom or Folly". Its main statement is that each human being is an Element of the Cosmos, self-determined and supreme, co-equal with all other Gods.
From this the Law "Do what thou wilt" follows logically. One star influences another by attraction, of course; but these are incidents of self-predestined orbits. There is, however, a mystery of the planets, revolving about a star of whom they are parts; but I shall not discuss it fully in this place.
Man is the Middle Kingdom. The Great Kingdom is Heaven, with each star as an unit; the Little Kingdom is the Molecule, with each Electron as an unit.
See "The Book of the Great Auk" for the demonstration that each 'star' is the Centre of the Universe to itself, and that a 'star' simple, original, absolute, can add to its omnipotence, omniscience and omnipresence without ceasing to be itself; that its one way to do this is to gain experience, and that therefore it enters into combinations in which its true Nature is for awhile disguised, even from itself. Analogously, an atom of carbon may pass through myriad Proteus-phases, appearing in Chalk, Chloroform, Sugar, Sap, Brain and Blood, not recognizable as "itself" the black amorphous solid, but recoverable as such, unchanged by its adventures.
This theory is the only one which explains "why" the Absolute limited itself, and why It does not recognize Itself during its cycle of incarnations. It disposes of "Evil" and the Origin of Evil; without denying Reality to "Evil", or insulting our daily observation and our common sense.
I here quote (with one or two elucidatory insertions) the original note originally made by Me on this subject.
May 14, 1919, 6.30 p.m.
All elements must at one time have been separate – that would be the case with great heat. Now when atoms get to the sun, when we get to the sun, we get that immense, extreme heat, and all the elements are themselves again. Imagine that each atom of each element possesses the memory of all his adventures in combination. By the way, that atom, fortified with that memory, would not be the same atom; yet it is, because it has gained nothing from anywhere except this memory. Therefore, by the lapse of time and by virtue of memory, a thing (although originally an Infinite Perfection) could become something more than itself; and thus a real development is possible. One can then see a reason for any element deciding to go through this series of incarnations (god, that was a magnificent conception!) because so, and only so, can he go; and he suffers the lapse of memory of His own Reality of Perfection which he has during these incarnations, because he knows he will come through unchanged.
Therefore you have an infinite number of gods, individual and equal though diverse, each one supreme and utterly indestructible. This is also the only explanation of how a being could create a world in which war, evil, "etc". exist. Evil is only an appearance because, like "good", it cannot affect the substance itself, but only multiply its combinations. This is something the same as mystic monism, but the objection to that theory is that God has to create things which are all parts of himself, so that their interplay is false. If we presuppose many elements, their interplay is natural. It is no objection to this theory to ask who made the elements – the elements are at least there; and God, when you look for him, is not there. Theism is "obscurum per obscurius". A male star is built up from the centre outwards, a female star from the circumference inwards. This is what is meant when we say that woman has no soul. It explains fully the difference between the sexes.
{WEH NOTE: Although Crowley evidently felt that this characterization was true simply, it should be noted that this comment is not CLASS A. The idea of center outwards and circumference inwards may actually have described the impression received by a male of the Victorian age in regard to men and women. Certainly every male mystic has the state here described as "circumference inward", "…no soul" and "female" at the time of reception — vide Liber LXV. Equally, every woman who acts positively from awareness of her identity would qualify for "center outwards", "soul" and "male" in this sense. What Crowley identified as sex-linked may better be considered as modality linked, with the sexual linkage as much an accident of culture as anything else.}