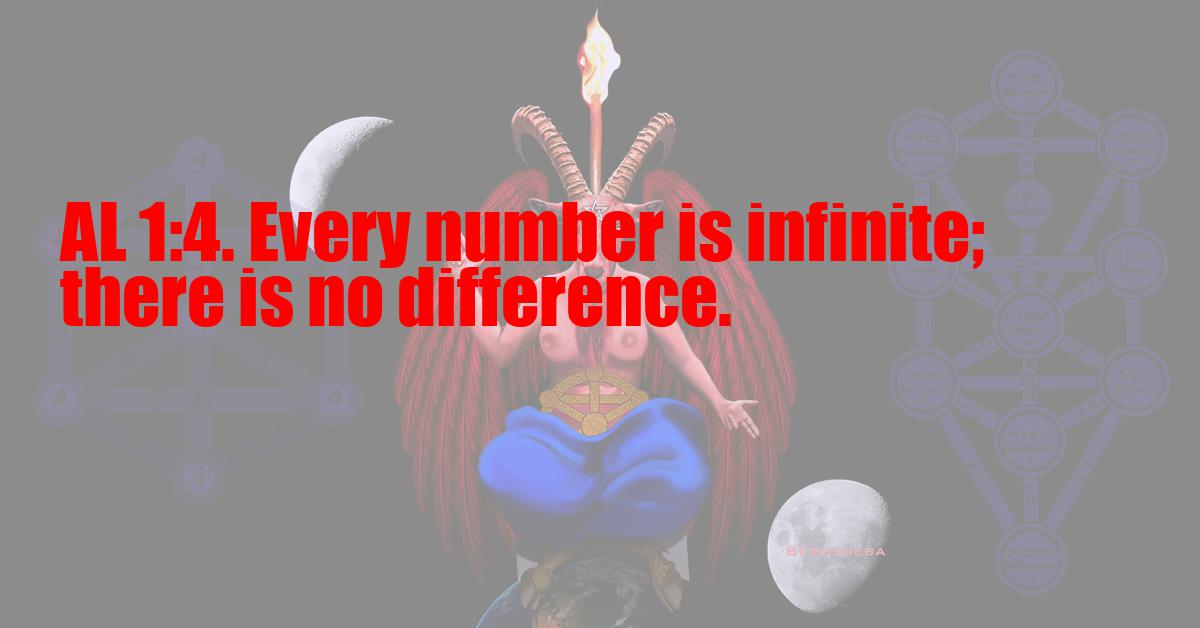 Every number is infinite; there is no difference.

The Djeridensis Comment
(3-4.) Virtues of the Soul.
All things are able to know all; all are alike in this, at the end of all.

Tunisia Diaries
Each individual possesses limitless possibilities. The total in each case is consequently the same.

The Old Comment
The limited is a mere mask; the illimitable is the only truth.

The New Comment
This is a great and holy mystery. Although each star has its own number, each number is equal and supreme. Every man and every woman is not only a part of God, but the Ultimate God. "The Centre is everywhere and the circumference nowhere". The old definition of God takes new meaning for us. Each one of us is the One God. This can only be understood by the initiate; one must acquire certain high states of consciousness to appreciate it.
I have tried to put it simply in the note to the last verse. I may add that in the Trance called by me the "Star-Sponge" – see note to v. 59 – this apprehension of the Universe is seen as an astral Vision. It began as "Nothingness with Sparkles" in 1916 E.V. by Lake Pasquaney in New Hampshire, U.S.A. and developed into fullness on various subsequent occasions. Each 'Star' is connected directly with every other star, and the Space being Without Limit (Ain Soph) the Body of Nuith, any one star is as much the Centre as any other. Each man instinctively feels that he is the Centre of the Cosmos, and philosophers have jeered at his presumption. But it was he that was precisely right. The yokel is no more 'petty' than the King, nor the earth than the Sun. Each simple elemental Self is supreme, Very God of Very God. Ay, in this Book is Truth almost insufferably splendid, for Man has veiled himself too long from his own glory: he fears the abyss, the ageless Absolute. But Truth shall make him free!