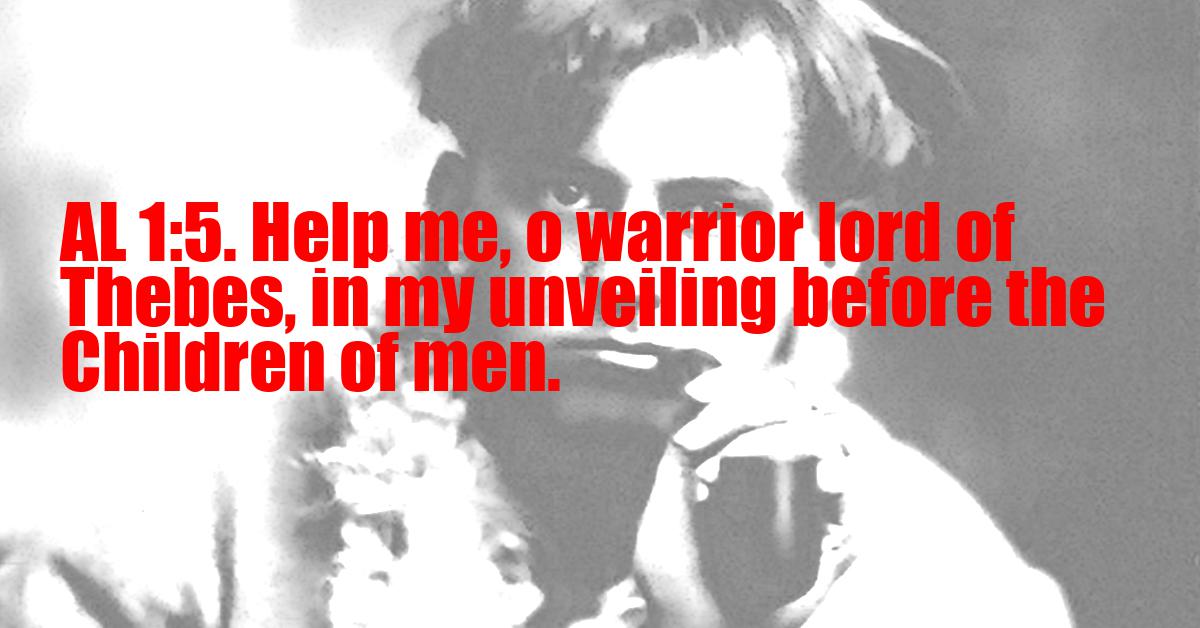 Bethsheba Comment:
The first word is a riddle or pun. It’s a regular transliteration of HALP האלף [The Aleph], and since the leader of a clan or tribe is called the Eleph (האלף), then we take the leading letter from each word in the next phrase. This is called notariqon and is regular part of hermeneutical exegesis. For: O warrior lord of Thebes, we take the leading letters OWLOTh.
OWLOTh + My + Unveiling + Children + Men = 802.
This is total gematria value for all the letters of the Hebrew alephbet: אבגדהוזחטיכלמנסעפצקרשת = 802, and also the value of the phrase ‘Glory of the Stars’ in AL 1:15.

Help me, o warrior lord of Thebes, in my unveiling before the Children of men!

Tunisia Diaries
The work of The Beast is to show mankind what possibilities are open to them.

The Old Comment
Nu, to unveil herself, needs a mortal intermediary, in the first instance.
It is to be supposed that Ankh-f-n-khonsu, the warrior lord of Thebes, priest of Men Tu, is in some subtle manner identical with either Aiwass or the Beast.

The New Comment
Here Nuit appeals, simply and directly, recognizing the separate function of each Star of her Body. Though all is One, each part of that One has its own special work, each Star its particular Orbit.
In addressing me as warrior lord of Thebes, it appears as if She perceived a certain continuity or identity of myself with Ankh-f-n-khonsu, whose Stele is the Link with Antiquity of this Revelation. See Equinox I, VII, pp. 363-400a, for the account of this event.
The unveiling is the Proclamation of the Truth previously explained, that the Body of Nuith occupies Infinite Space, so that every Star thereof is Whole in itself, an independent and absolute Unit. They differ as Carbon and Calcium differ, but each is a simple "immortal" Substance, or at least a form of some simpler Substance. Each soul is thus absolute, and 'good' or 'evil' are merely terms descriptive of relations between destructible combinations. Thus Quinine is 'good' for a malarial patient, but 'evil' for the germ of the disease. Heat is 'bad' for ice-cream and 'good' for coffee. The indivisible essence of things, their 'souls', are indifferent to all conditions soever, for none can in any way affect them.