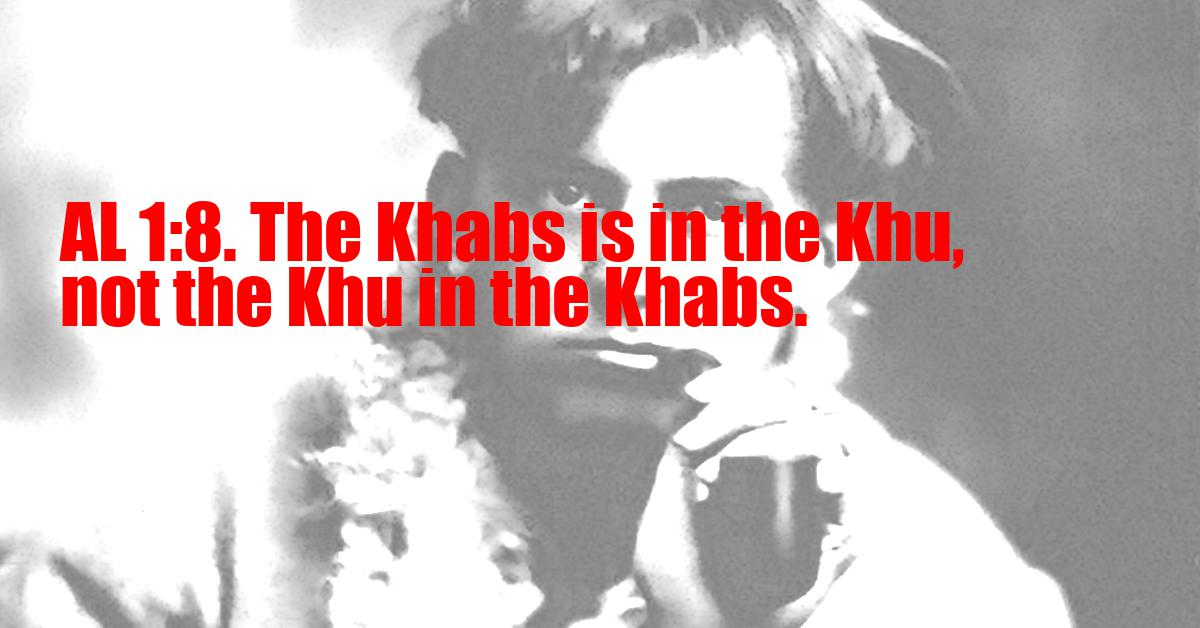 Bethsheba Comment:
'Not' in Hebrew is לא LA which is the reverse of אל AL (31). According to the rules of gematria, if there is something that is 'in' or 'on' something else, then we must pull it out by subtraction to see what it is.
The Khu - The Khabs + LA + the Khabs - the Khu = 31, so the Khabs and the Khu cancel themselves out in the moment of creation to reveal God, who is also NOT because 0 = 2. Chapter 5 of Magick without Tears may be of some assistance towards understanding this equation.

The Khabs is in the Khu, not the Khu in the Khabs.

The Djeridensis Comment
Nature of Mankind.
The essence of a Man and Woman – each being a Star or sovereign God poised in Space by its own act – is clothed in thoughts and deeds as is its Nature, hidden by them.
This essence is all-worthy; adore it, and the light of all that may be shall be shed upon you.

Tunisia Diaries
The manifested qualities of any individual are expressions of his essence but his nature cannot be discovered by investigating them.

The Old Comment
Khabs is the secret Light or L.V.X.; the Khu is the magical entity of a man.
I find later (Sun in Virgo, An VII.) that Khabs means star. In which case "cf. v." 3.
The doctrine here taught is that the Light is innermost, essential man. Intra (not Extra)
Nobis Regnum Dei.

The New Comment
We are not to regard ourselves as base beings, without whose sphere is Light or "God". Our minds and bodies are veils of the Light within. The uninitiate is a "Dark Star", and the Great Work for him is to make his veils transparent by 'purifying' them. This 'purification' is really 'simplification'; it is not that the veil is dirty, but that the complexity of its folds makes it opaque. The Great Work therefore consists principally in the solution of complexes. Everything in itself is perfect, but when things are muddled, they become 'evil'. (This will be understood better in the Light of "The Hermit of Esopus Island", q.v.) The Doctrine is evidently of supreme importance, from its position as the first 'revelation' of Aiwass.
This 'star' or 'Inmost Light' is the original, individual, eternal essence. The Khu is the magical garment which it weaves for itself, a 'form' for its Being Beyond Form, by use of which it can gain experience through self-consciousness, as explained in the note to verses 2 and 3. This Khu is the first veil, far subtler than mind or body, and truer; for its symbolic shape depends on the nature of its Star.
Why are we told that the Khabs is in the Khu, not the Khu in the Khabs? Did we then suppose the converse? I think that we are warned against the idea of a Pleroma, a flame of which we are Sparks, and to which we return when we 'attain'. That would indeed be to make the whole curse of separate existence ridiculous, a senseless and inexcusable folly. It would throw us back on the dilemma of Manichaeism. The idea of incarnations "perfecting" a thing originally perfect by definition is imbecile. The only sane solution is as given previously, to suppose that the Perfect enjoys experience of (apparent) Imperfection. (There are deeper resolutions of this problem appropriate to the highest grades of initiation; but the above should suffice the average intelligence.)