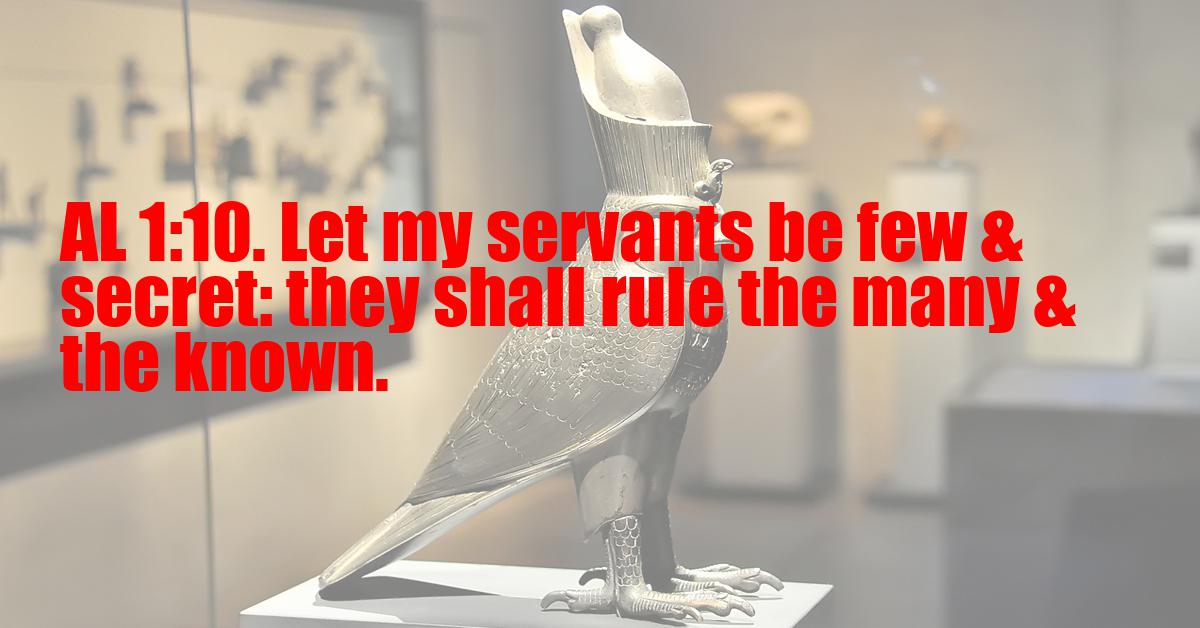 Let my servants be few & secret: they shall rule the many & the known.

The Djeridensis Comment
Masters of Mankind defined.
Those who adore and love all things alike, for that they are of Truth, are yet but few, and are not known of men. Yet being free of fear and lust their power controls the many [originally "multitude"][7] whose souls are subject to limit, the limit of knowledge, which is always two, and can be counted.

Tunisia Diaries
Few individuals, & those beyond the understanding of mankind are fitted to work to complete the scheme of nature which contemplates the realisation in actual experience of all the possibilities of every individual. Such persons commanding types of experience exceeding the normal are able to direct the actions of the majority whose scope is universally understood.

The Old Comment
This is the rule of Thelema, that its adepts shall be invisible rulers.
This, it may be remarked, has always been the case.

The New Comment
The nature of magical power is quite incomprehensible to the vulgar. The prophet Ezekiel besieging a tile in order to destroy Jerusalem, and the adventure of Hosea with Gomer, seem as absurd to the 'practical' man as do the researches of any other scientific man until the Sunday Newspapers have furnished him with a plausible explanation which explains nothing. (Book 4, Part III, must be read in this connexion.)
"My servants"; not those of the Lord of the Aeon. "The Law is for all"; there can be no secrecy about that. The verse refers to specially chosen 'servants'; perhaps those who, worshipping the Khabs, have beheld Her light shed over them. Such persons indeed consummate the marriage of Nuit and Hadit in themselves; in that case they are aware of certain Ways to Power.
There is also a mystical sense in this verse. We are to organize our minds thoroughly, appointing few and secret chiefs, serving Nuit, to discipline the varied departments of the conscious thought.