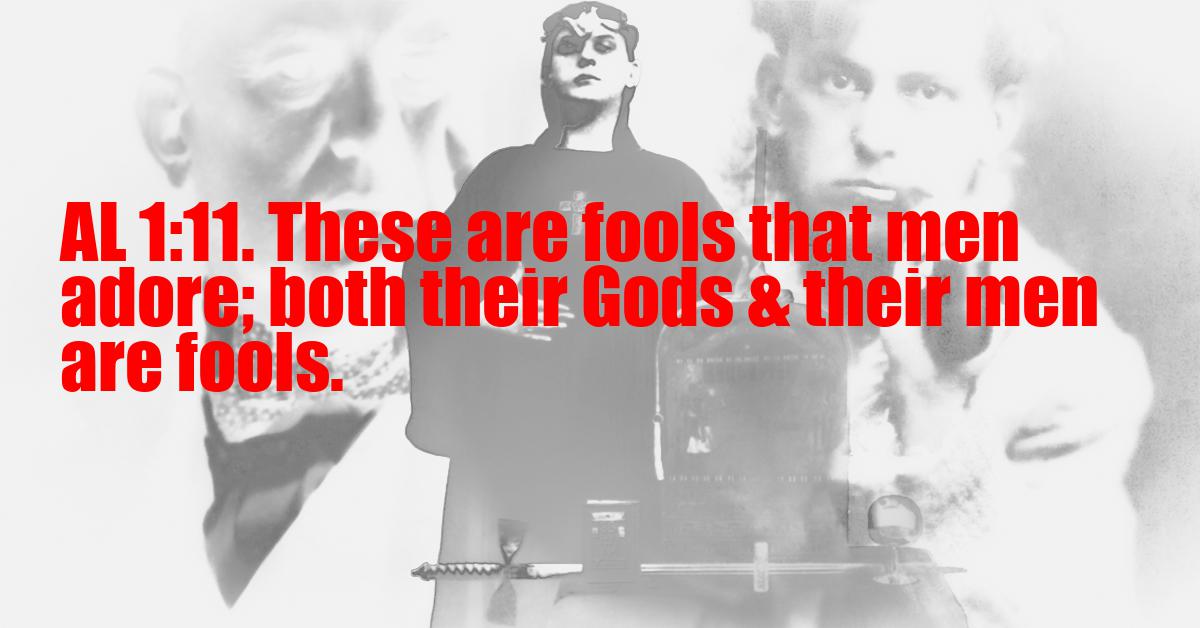 Bethsheba Comment:
Fools = 310. Because both men and Gods are fools there are three fools to be counted in the expression (one is implied). Fools x 3 = 930.
Their Gods + Their Men = 670, which is the gate of the First Palace of the Seven Palaces corresponding with the Sephiroth of Yesod and Malkuth on the Tree of Life.
Also: Major Adeptus + men + Gods = 718. (See previous verse & 3:19)

These are fools that men adore; both their Gods & their men are fools.

The Djeridensis Comment
The Secret of Government.
Men adore Naught, although they deem Naught God and Man; thus the Pure Fool rules them, and saves them from base knowledge which is false.

Tunisia Diaries
The ordinary man constructs & worships an ideal which he calls God or hero according in the image of the phantasm of his vanities.

The Old Comment
"The many and the known," both among Gods and men, are revered; this is folly.

The New Comment
It is a fact of meditation that everything which becomes manifest is instantly recognized as unreal. All perfect unveiling solves, wholly or in part, the equation "Something equals 0/0." (See comment on verse 28.) Adeptship is little more than ability to perceive this 0/0 phase of "Something" in respect of larger and larger "Somethings".
A verse with so sacred a number as 11 is likely to mean very deep things. Probably much concerning the function of The Fool is concealed in it.
It has been shewn in a previous note that the principal Gods, and men, that men have adored, are in one way or another represented in the Tarot card "The Fool". The statement in the text is, superficially, either a platitude or a petulance; neither sounds like the tone of Nuit. A third alternative? Can we have "phrased" it carelessly, or punctuated it incorrectly? Or is there a Qabalistic puzzle or a mystic submeaning concealed? The subject changes instantly, as it seems. I prefer to suggest that these "fools" are "Silent selves", impotent babes unborn; then verse 12 continues "Come forth!", that is, bring your Holy Guardian Angel from the womb of your subconsciousness. Then, "take your fill of love"; that is, do your True Will, whose mode of fulfilment is love, as explained later in this chapter.