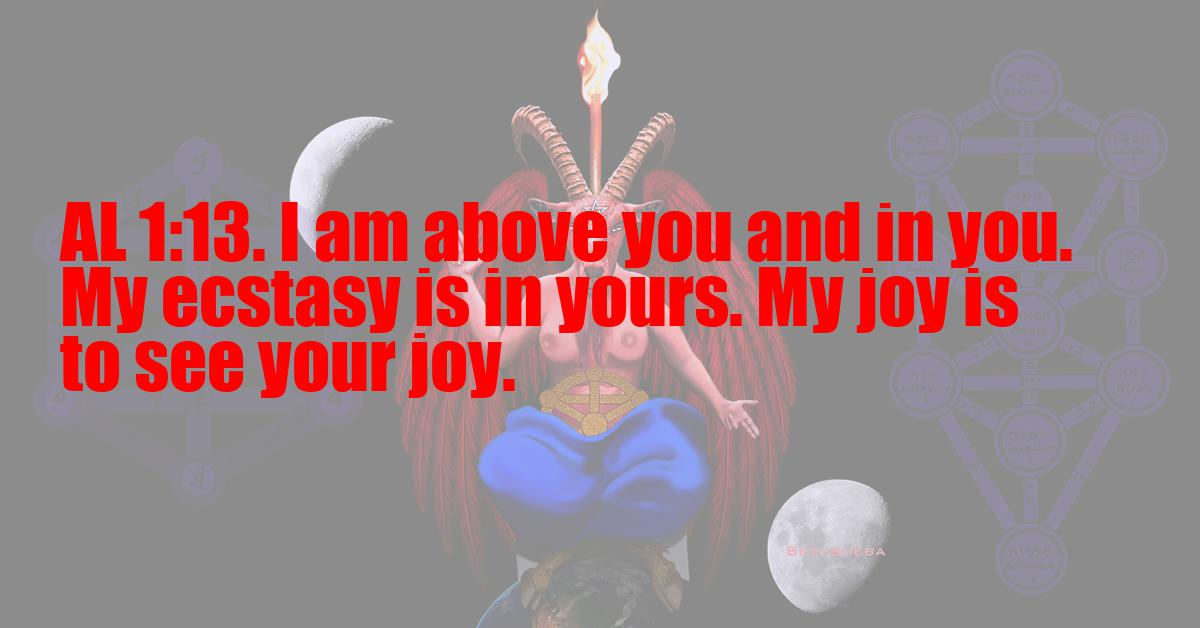 Bethsheba Comment:
Let us follow the logic of the verse. Above suggests addition as does the act of seeing, whereas in indicates subtraction. I am is two words so we add the first one (I) and subtract the second (am). I suggest;
I - am + you + you + yours - My ecstasy + My joy + your joy = 800,
and 80 by the Reversal Cipher.

I am above you and in you. My ecstasy is in yours. My joy is to see your joy.

The Djeridensis Comment
Nuit expressed in an Eidolon.
Nuit is formed into an Image of a Woman, that She may be the symbol of all ways of going in Love.
Her relation to Mankind.
She is our Goal and our own heart‘s essence of Will.
Her Mother-Joy as Nature.
She is Nature, who is glad of the birth of all that cometh forth.

Tunisia Diaries
A man's possibilities are the heights to which he should climb. They are inherent in his own nature. Possibility fulfils itself whenever any individual makes it actual. The effect of any such act is to create the ineffable joy which accompanies the satisfaction of the ache resulting from the sense of imperfection.

The Old Comment
This doctrine implies some mystic bond which I imagine is only to be understood by experience; this human ecstasy and that divine ecstasy interact.
A similar doctrine is to be found in the Bhagavad Gita.

The New Comment
Note that Space is omnipresent. « Perhaps I should have defined the word "Space". The task is far from easy. Space (including Time) is one of the conditions necessary to the illusion of duality. But when Nuith says "I am Infinite Space and the Infinite Stars thereof" (verse 22) there must be some other meaning. May I define it as "totality of the possibilities of giving Form to Being", and thus equivalent to "Matter", which manifests "Motion"? This at least suits the verse under present discussion; for the Feminine Idea is to take delight in enabling the Masculine Idea to express itself by its means. There should be no difficulty for the student of modern mathematical philosophy in conceiving Matter and Space as identical. He may find it less easy to assent to a personification capable of speech. But I shall not resent the interpretation of Her speech as being the rhetorical device of AIWAZ. Devotion to Her, Knowledge of Her, may perfectly well be understood as the process of extending the human consciousness to apprehend the supra-rational idea thus presented. It was obviously necessary, from a practical point of view, to phrase this Book in terms of common parlance, concealing the more recondite Arcana in in the numerical and literal cipher. When, then, I say "Space is omnipresent", it is almost the equivalent of "Anything is always liable to happen." » The cause of 'sorrow' is the 'imaginary' solutions of continuity in this substance. Ecstasy is produced by the resolution of these illusions. Observe well that to beings in a state of strain or sorrow the "Great Work" is bound to appear in the guise of a relief or joy. But this is not to assert Samadhi, that unity with the universe which brings relief and joy by "love", as an "absolute good". It is only good relatively to our present condition as beings divided by Illusion from Nuit. When one returns to the 'simple' state, one soon begins to think out a new route through the Universe, and devise new combinations in the Great Game called Seeing Life.
In Nature few elements are lone wolves. Most of them are being thrown in and out of combination constantly; on suns this occurs with lordly vehemence.
Note that Nuith, although She is Infinite Space, speaks as an individual might do, often enough. This is not that She is 'talking down to our level'; it is a fact. In the Cosmos almost any aggregation can think and act as an Ego. For instance, the cells of our bodies are each units, diverse in composition and character, living each a life of its own. Yet we think and act for them, and say "I". The stars are the cells of Her Body. Each one of us is such a cell; not less itself but more because of its secret function in Her.
It should be evident that Nuith obtains the satisfaction of Her Nature when the parts of Her Body fulfil their own Nature. The sacrament of live is not only so from the point of view of the celebrants, but from that of the divinity invoked.
It is said that for every step one takes towards one's Holy Guardian Angel, He takes two towards his client.
What do I mean by "beings divided by Illusion from Nuith", in the first paragraph? This, that we are limited mentally, that we realize only an infinitesimal fraction of the possible forms of expression. We can hardly even imagine ourselves as living on another planet, or in the Sun; much less as apprehending the Universe by means of a totally different set of senses. Yet most of us who are not mere placental amnoites possess an instinct which persistently regrets our incapacities. It is bad enough to be dependent on scientific instruments for our knowledge of all but the grossest of the wonders and splendours of the Universe; but worse that we are aware of an infinite variety of order of phenomena, such as electricity, magnetism, chemical action, and a host of others, which we can explore only by indirect means, interpret only by obviously inadequate symbols, and understand only in terms of arbitrary relations with our animal-sense-perceptions. We know theoretically that every object must react to every other object; and it is evident that each type of reaction may be as overwhelmingly interesting as those which happen to affect us. What unimaginable rapture to be able to observe magnetic fields or molecular movements as directly as we do the Ocean and the Ant-heap! It is the task of the Initiate to adapt himself to the Totality of Existence, and to develop in himself the means of apprehending it wholly and fully.