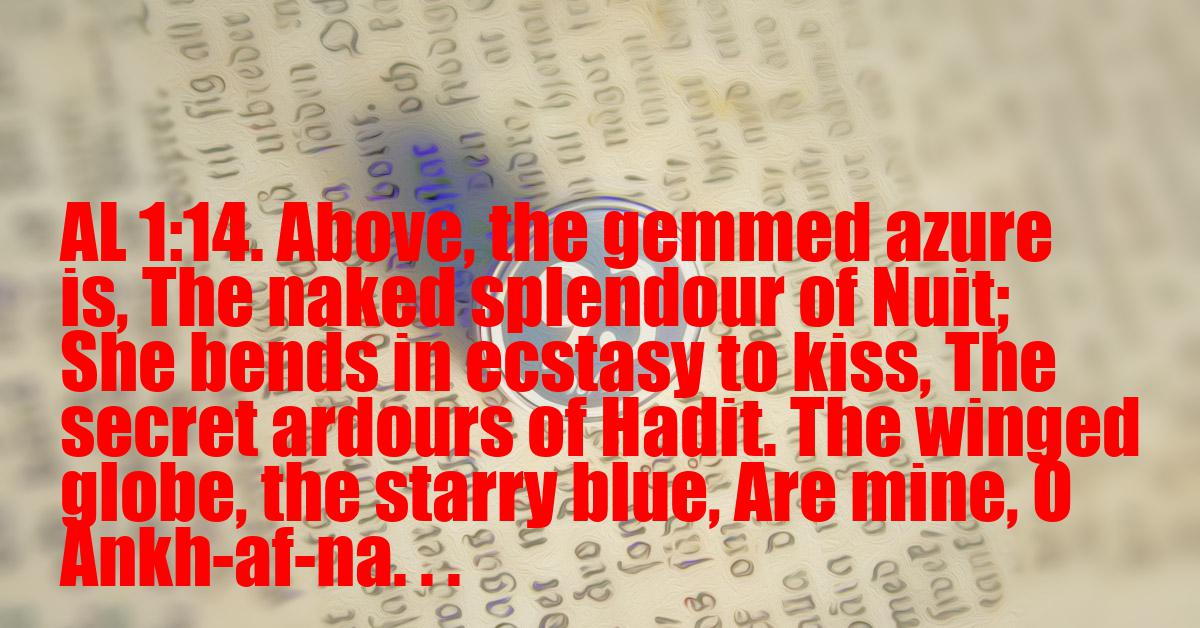 Above, the gemmed azure is
The naked splendour of Nuit;
She bends in ecstasy to kiss
The secret ardours of Hadit.
The winged globe, the starry blue,
Are mine, O Ankh-af-na-khonsu!

The Djeridensis Comment
The Secret of Joy.
The Soul of Man flameth forth in Love unto the utmost Spaces of the Stars, and hath his joy of all of them.
All events are children of Nuit.
Every event doth fulfil some Love, and each is thenceforth of the Body of Nuit, which is event as Her Soul is Lust to bring forth, and the chance so to do.

Tunisia Diaries
All such acts of love rekindle the ecstasy of creation & recreate the universe. New powers & possibilities spring afresh from every achievement of those already existing.

The Old Comment
This verse is a direct translation of the first section of the stele. It conceals a certain secret ritual, of the highest rank, connected with the two previous verses.

The New Comment
This is a poetic description of the symbolism of the Stele. It is suitable fore such minds as approach Truth in this manner rather than by way of Science or Philosophy.
It contains a Formula of Magick Art, connected with the Stele. Also, less ineffably, it boasts the consummation of the marriage of Hadit and Nuit in the priest. That is, he has freed Hadit, in the core of his Star, from the illusion-veils of the Khu, so that the two Infinities become one, and none; and create, in the manner shortly to be described, a new Finite.
This Finite will evidently be an expression of the particular mood of its Father and Mother at the moment of its conception. Obviously, this "Child" cannot add to the Universe; it is therefore inevitably twin (Horus and Harpocrates, Osiris and Typhon, Jesus and Barabbas) in Nature, formed of equal and opposite elements. When the Operation is mystical in character, the "Child" does not appear at all in this manifested form as Two, but as Naught. In the consciousness of the Adept, this is called Samadhi. He has united himself with, and lost himself in, Nuit. When the "Child" appears as Two, it is Magick, as the other is Mysticism. This is the essential difference between these Arts.