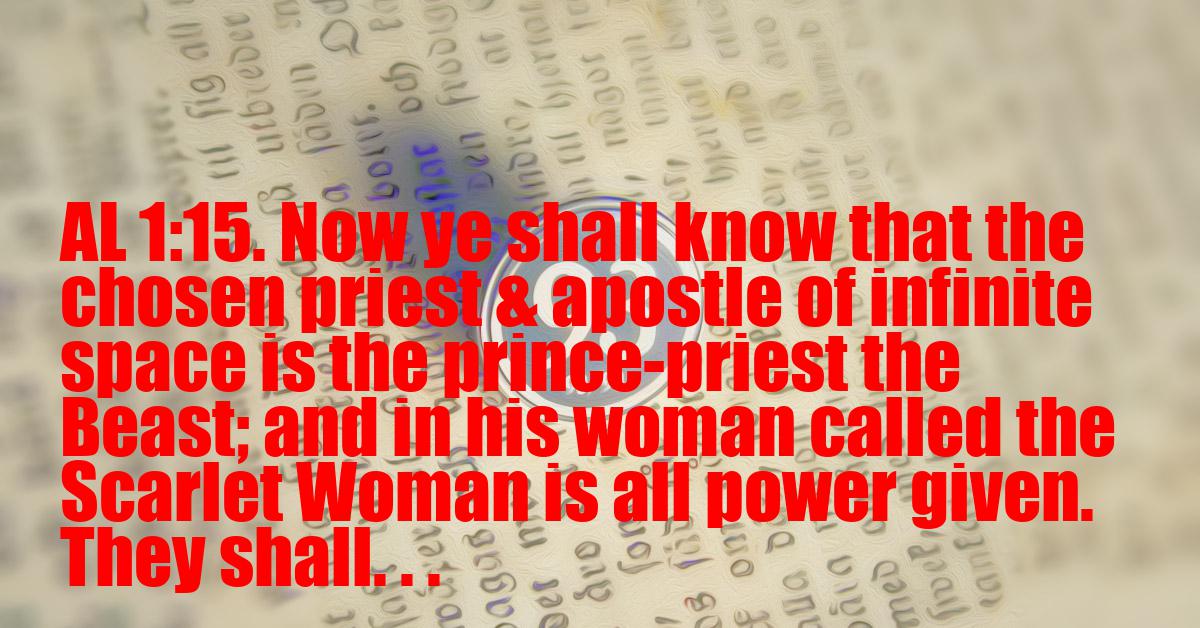 Now ye shall know that the chosen priest & apostle of infinite space is the prince-priest the Beast; and in his woman called the Scarlet Woman is all power given. They shall gather my children into their fold: they shall bring the glory of the stars into the hearts of men.

The Djeridensis Comment
Mission of 666 and his woman. Her Nature & Office. She is the Scarlet Woman, Η ΚΟΚΚΙΝΑ ΓΥΝΗ, 667, as he is ΤΟ ΜΕΓΑ ΘΗΡΙΟΝ, The Great Wild Beast 666.
I, The Beast 666, am called to shew this worship and send it forth into the world; by my Woman called the Scarlet Woman, who is any woman that receives and transmits my Solar Word and Being, is this My Work achieved; for without Woman man hath no power. By Us let all men learn that all that may be is their Way of Joy for them to go; and that all souls are of the Soul of True Light.

Tunisia Diaries
The Beast is chosen to show by example & also by exposition that man's perfection depends upon his realising that his possibilities are infinite & demand realisation. The woman associated with him in this work thereby gives form to his idea. Their cooperation inspires mankind to follow their example with the result that men become aware of the sublime nature of every individual consciousness.

The Old Comment
The authority of the Beast rests upon this verse; but it is to be taken in conjunction with certain later verses which I shall leave to the research of students to interpret. I am inclined, however, to believe that "the Beast" and "the Scarlet Woman" do not denote persons, but are titles of office, that of Hierophant and High Priestess ו and ג {Vau and Gimel}, else it would be difficult to understand the next verse.

The New Comment
The definition of "infinite space" offered in the Comment on verse 13 is useful here. My Work is in great part to insist upon the infinite possibilities of human development. Man has too slavishly acquiesced in his limitations. Science itself has shewn itself almost as intolerant as Religion toward certain lines of research. Indeed, every element of society has added its energy to the opposition which bars each pioneer with undiscriminating stupidity. Darwin, Pasteur, Lister, and Jenner met with the same ferocious cowardice as Shelly and Luther; they were assailed on every ground from Religion and Morality upwards; every falsehood that malice could invent was circulated about them. In short, they were treated then as I am being treated now; and I am resolute to prosecute my Work now as they were resolute then.
That which is beneath is like that which is above. The Beast and the Scarlet Woman are avatars of Tao and Teh, Shiva and Sakti. This Law is then an exact image of the Great Law of the Cosmos; this is an assurance of its Perfection.
It is necessary to say here that The Beast appears to be a definite individual; to wit, the man Aleister Crowley. But the Scarlet Woman is an officer replaceable as need arises. Thus to this present date of writing, Anno XVI, Sun in Sagittarius, there have been several holders of the title.
1. Rose Edith Crowley nee Kelly, my wife. Put me in touch with Aiwas; see Equinox 1, 7, "The Temple of Solomon the King." Failed as elsewhere is on record.
2. A doubtful case. Mary d'Este Sturges nee Dempsey. Put me in touch with Abuldiz; hence helped with Book 4. Failed from personal jealousies.
3. Jeanne Robert Foster nee Oliver. Bore the "child" to whom this Book refers later. Failed from respectability.
4. Roddie Minor. Brought me in touch with Amalantrah. Failed from indifference to the Work.
5. A doubtful case, Marie Rohling nee Lavroff. Helped to inspire Liber CXI. Failed from indecision.
6. A doubtful case, Bertha Almira Prykryl nee Bruce. Delayed assumption of duties, hence made way for No. 7.
7. Lea Hersig. Assisted me in actual initiation; still at my side, An XVII, Sol in Sagittarius. (P.S. & An XIX, Sol in Aries).
"Prince-priest" is an unusual word, and not in tone with other references to me. I suspect therefore a secret cipher of some sort. For one thing, it is an anagram of PRINCEPS ITER, not bad for Alastor the Wanderer, or PRINCIPS ERIT, he shall be the chief (see verse 23). But such Qabalah is hardly to be considered serious. The recurrence of the letters PRI is however curious and may be significant. The combination PR in most Aryan Languages gives the idea of "Before." P and R are the letters of Mars and Sol respectively. Now Mars is referred to the number 5, and Sol to the number 6; both to the idea "Force and Fire", though in different ways. Now "Force and Fire" is the attribute of Ra-Hoor-Khuit, Lord of the Aeon; and 5 and 6 are mystically mated to represent the Accomplishment of the Great Work in Abrahadabra, the Word of the Aeon. (See, for this Word, infra Qabalistic Appendix). The termination ST is the coronal combination XXXI which we shall notice often enough later on.
The Beast, besides 666 correspondences, is by English sound, the Magus (Beth, Mercury, etc.) of this ST. S has in the Tarot the card numbered XX, which represents the Stele of Revealing, and is called the Judgment; i.e., the ending of an Aeon. T has the card numbered XI and is called Strength. It is the card of Leo and represents Babalon and the Beast conjoined.
"Their fold"; not only a sheepfold, but as if it were written "their embrace".