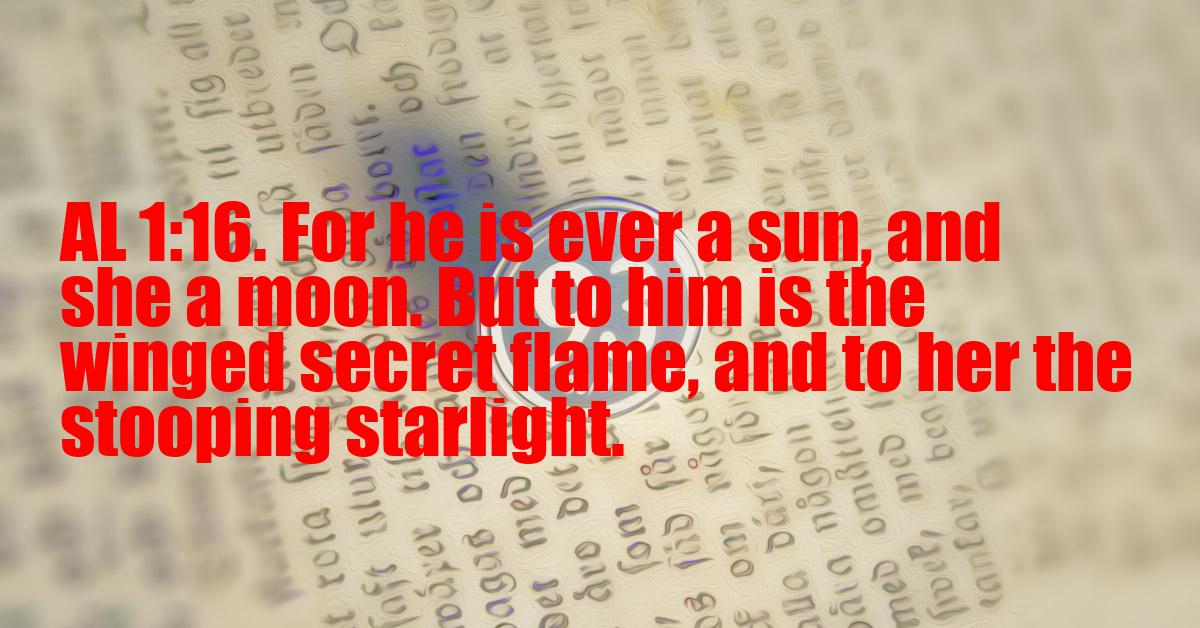 Bethsheba Comment:
This is simple enough, though I doubt I would have gotten it without Crowley's commentary indicating that I should include the names of Nuit and Hadit in the calculations.
Sun + Winged Secret Flame + Hadit = 666
Moon + Stooping Starlight + Nuit = 666 (with the Reversal Cipher)

For he is ever a sun, and she a moon. But to him is the winged secret flame, and to her the stooping starlight.

The Djeridensis Comment
Our Function shewn in a Figure.
I am a Sun, giving out Light and Life; but she is their guide in darkness, making them pure, single of heart, awake to the Highest.
Our Powers.
I have the power to kindle in my mind the Essence of the Abstract Soul; she that of taking all that may be dear and near and clear to men and women, that so they all may find their joy in all.

Tunisia Diaries
The Beast is thus the source of Light & Life & bestows these openly upon such as understand clearly the nature of the Universe. Her function is to reflect his light to such as walk in ignorance yet dream & aspire. He is the type of the individual & she of the forms by which he is able to express himself.

The New Comment
The sun and moon, in their occult sense, are secondary representatives of this original duality which is a phase of the Qabalistic Zero. Other correspondences are Yun {SIC, s.b. "Yang" ?WEH} and Yin, Yod and He, etc. But most such dualities have been conceived in very gross and unphilosophical forms. Of course, it is impossible to grasp this subject properly by reason; only the understanding developed by meditation and spiritual experience avails. Initiation is pantomorphously progressive.
Note that the Secret Divine Letter ShT which is the key of this book is by shape the Sun united with the Moon C = Sh, O = t CO = Sht.
{WEH NOTE: Elsewhere Crowley calls this sign "the secret sigil of the Beast" and it is depicted by a crescent attached to the left side of a circle. Sometimes the circle is dotted. Sometimes the Greek lower case letters sigma-theta are written connectively for this (vide. Liber MCCLXIV, value 209, first edition, OTONL-6 and note 28).}