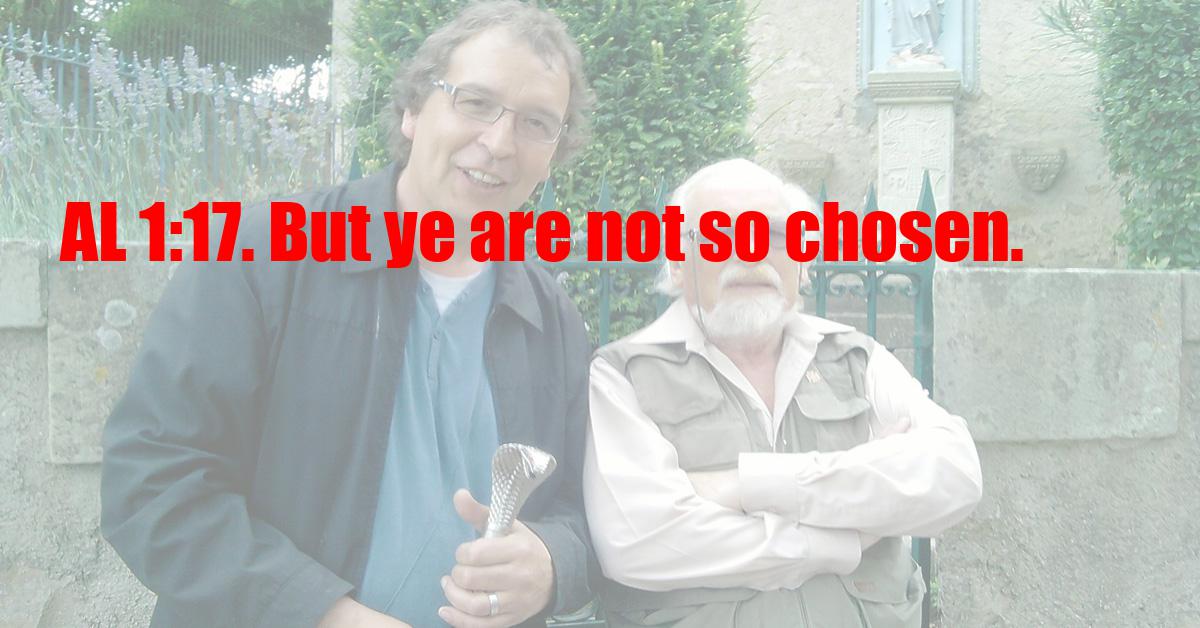 Bethsheba Comment:
In biblical texts 'not' לא is not counted but used as an indicator not to count the next word, however Crowley uses the word to indicate LA לא as the feminine aspect of God with the value of 31.
Therefore: But ye are LA so chosen = 800 by Reversal Cipher.
Compare with 1:6 and 1:13.

But ye are not so chosen.

The Djeridensis Comment
666 and 667 set apart for this Work.
I and my woman alone are chosen for this work; all others are best and truest as they seek Nuit in their own Way.

Tunisia Diaries
The Beast & The Scarlet Woman are the sole authorised exponents of this doctrine.

The Old Comment
"Ye" refers to the other worshippers of Nuit, who must seek out their own election.

The New Comment
That is, there is a special incarnation of Nuit and Hadit for the Beast and the Scarlet Woman, as opposed to the general truth that every man and woman are images of these ineffable Beings.
Note that a woman, having no soul of her own, can be used always as a 'Form' for any Being. This explains why Nuit can incarnate at will in successive women, careless of the physical limits of life.
{WEH NOTE: Crowley's opinion regarding the soul-less state of women refers to a matter of expression. He believed it more generally, but probably based it on Victorian male conceptions of "unliberated women". The Comment to this and the previous verse may say more about the defensive insecurity of Crowley the man than the verses of Liber AL. In Chapter I Comment, remember that all this is a male mind trying to contemplate the revelations of a goddess. Square peg and round hole problems may arise.}
I feel a certain necessity to explain that an 'avatar' implies rather a release from the limits of personality than anything else. The Scarlet Woman and I are peculiarly representative of Nuit and Hadit by virtue of our attainments in making our consciousness omniform as They re. It must not be supposed that our original individualities can claim any special prerogatives as such.