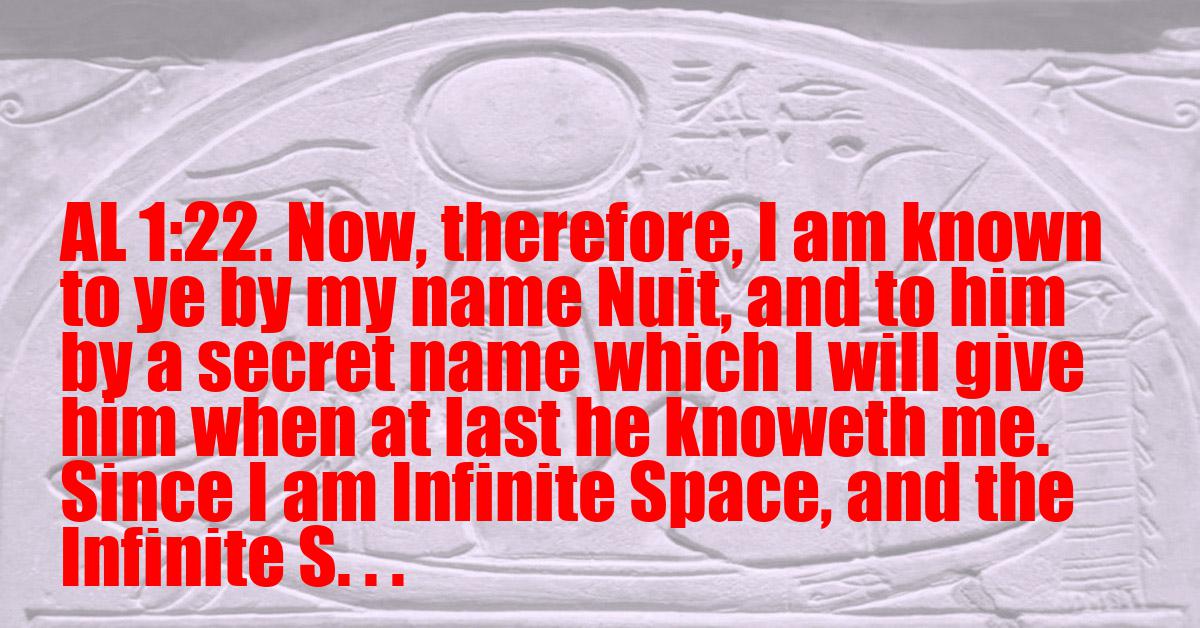 Bethsheba Comment:
From the notariqon of Infinite Space Infinite Stars we recieve the name of the Goddess Isis.
A secret name + Isis + bind nothing = 777.

Now, therefore, I am known to ye by my name Nuit, and to him by a secret name which I will give him when at last he knoweth me. Since I am Infinite Space, and the Infinite Stars thereof, do ye also thus. Bind nothing! Let there be no difference made among you between any one thing & any other thing; for thereby there cometh hurt.

The Djeridensis Comment
Her Name: 666 is taught a name more sacred yet.
Nuit is the name by which this Starlight Yearning is to be known of men; to me the Beast she hath given a secret Name in that Great Night wherein I came to perfect Oneness[8] with All things that might be ever.
Nuit further defined. Reality and illusion: the None, the One, the Many & the All, identified through Her.
Nuit is Space beyond the idea of Limit or Measure; She is also All Points of View no less than All Vistas seen therefrom. Bind nothing, for all things alike pertain to her, and her Nature is to compose All in One and Naught. One thing is in the end like all the rest; the seeming not alike comes as a dream from choosing images after one‘s own heart to worship them; thus each, though true as one of the All, is false if thought of as one apart from the rest.

The Old Comment
A promise — not yet fulfilled. [Since (Sun in Sagittarius, An V.) fulfilled.]
A charge to destroy the faculty of discriminating between illusions.

The New Comment
We have here a further conception of the cosmographical scheme. Nuit is All that which exists, and the condition of that existence. Hadit is the Principle which causes modifications in this Being. This explains how one may call Nuit Matter, and Hadit Motion, in the highest physico-philosophical sense of those terms.
We are asked to axquiesce in this Law of Nature. That is, we are not to oppose resistance to the perfect fluidity of the "Becoming" of Nature. Similarly, we are not to attach more importance to any one momentary appearance than to any other.
For, the moment we do so, we confirm illusion of Duality. We assert Imperfection as absolute instead of as a device of Perfection for self-appreciation.
The Secret name was revealed in the Sahara desert – see Liber 418, 12 Aethyr, Equinox I, V, Suppl. pp. 82-87.
This question of making "no difference" as ordained is to regard the whole of the non-Ego or universe apparently external to the Self as a single phenomenon; Samadhi on any one thing becomes therefore Samadhi on The Whole. The mystic who "availeth in this" can then perform his Great Work of "love under will" in a single operation instead of being obliged to unite himself with the non-Ego piecemeal. But see also the Comment on verse 4, above.
Notice the word "hurt", from he French "heurter", meaning to knock against an obstacle. There is thus a strictly technical accuracy in the choice of the term.
(Insert quotations from Essay of AN XIX March 31 - April 11 showing how all is the same to Nuit, though not to partial views.)