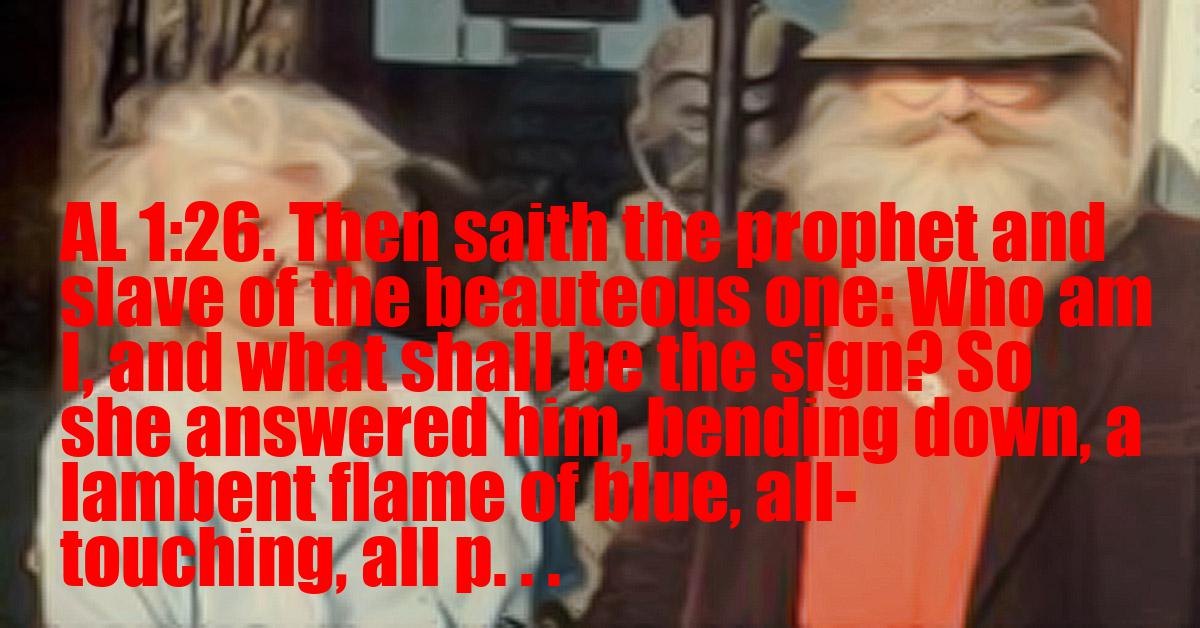 Bethsheba Comment:
Replace the word one for the number or the letter א (A):
Saith prophet and slave of the beauteous A = 1000.
The prophets question is notariqon:
W A I A W Sh B Th S = 800 (by Reversal Cipher).

Crowley claims part of the original sentence for this verse was:
The unfragmentary non - atomic fact of my universality, which sums to 1 when the hyphen is taken as the minus sign.

Then saith the prophet and slave of the beauteous one: Who am I, and what shall be the sign? So she answered him, bendingdown, a lambent flame of blue, all-touching, all penetrant, her lovely hands upon the black earth, & her lithe body arched for love, and her soft feet not hurting the little flowers: Thou knowest! And the sign shall be my ecstasy, the consciousness of the continuity of existence, the omnipresence of my body.

The Djeridensis Comment
(25-26.) Nuit proves to Aleister Crowley that he is in truth 666 by means of a riddle and a Sign.
I, asking Nuit: Who am I? and: What shall be the sign? (that I am who I am) was told by means of a Riddle, so that I might be sure that the answer came from Her and not from mind own mind, that I was 666. Also the sign was shewn me in a Riddle, as well as in the English of the Text. These matters will I set forth elsewhere.[9]

The Old Comment
The prophet demanding a sign of his mission, it is promised: a Samadhi upon the Infinite.
This promise was later fulfilled — see "The Temple of Solomon the King," which proposes to deal with the matter in its due season.
(P.S. It did so, vide Equinox I.)

The New Comment
In the MSS., the last 5 words of this verse do not occur. The original reading is 'the unfragmentary non-atomic fact of my universality'.
This phrase was totally beyond the comprehension of the scribe, and he said mentally – with characteristic self-conceit – "People will never be able to understand this." Aiwass then replied,
"Write this in whiter words. But go forth on."
He was willing that the phrase should be replaced by an equivalent, but did not wish the dictation to be interrupted by a discussion at the moment. it was therefore altered (a little later) to "the omnipresence of my body."
It is extremely interesting to note that in the light of the cosmic theory explained in the notes to verse 3 and 4, the original phrase of Aiwass was exquisitely and exactly appropriate to his meaning.
It take this opportunity of quoting from Professor Eddington, Op. Cit., a passage which should make it perfectly clear that the "mystical", "irrational", "paradoxical" conception of Nuit expressed in this chapter has a parallel in the sober calculations of a perfectly orthodox astronomer in the undeniably practical University – a poor thing, but mine own – of Cambridge:
"Whenever there is matter there is action and therefore curvature; and it is interesting to notice that in ordinary matter the curvature of the space-time world is by no means insignificant. for example, in water of ordinary density the curvature is the same as that of space in the form of a sphere of radius 570,000,000 kilometers. The result is even more surprising if expressed in time unites; the radius is about half-an-hour.
"It is difficult to picture quite what this means; but at least we can predict that a Globe of water 570,000,000 km. radius would have extraordinary properties. Presumably there must be an upper limit to the possible size of a globe of water. So far as I can make out a homogeneous mass of water of about this size (and no larger) could exist. It would have no centre, and no boundry, every point of it being in the same position with respect to the whole mass as every other point of it – like points ion the surface of a sphere with respect to the surface. Any ray of light after travelling for an hour or two would come back to the starting point. Nothing could enter or leave the mass, because there is no boundary to enter or leave by; in fact, it is coextensive with space. There could not be any other world anywhere else because there isn't an 'anywhere else'.
"The mass of this volume of water is not so great as the most moderate estimates of the mass of the stellar system".