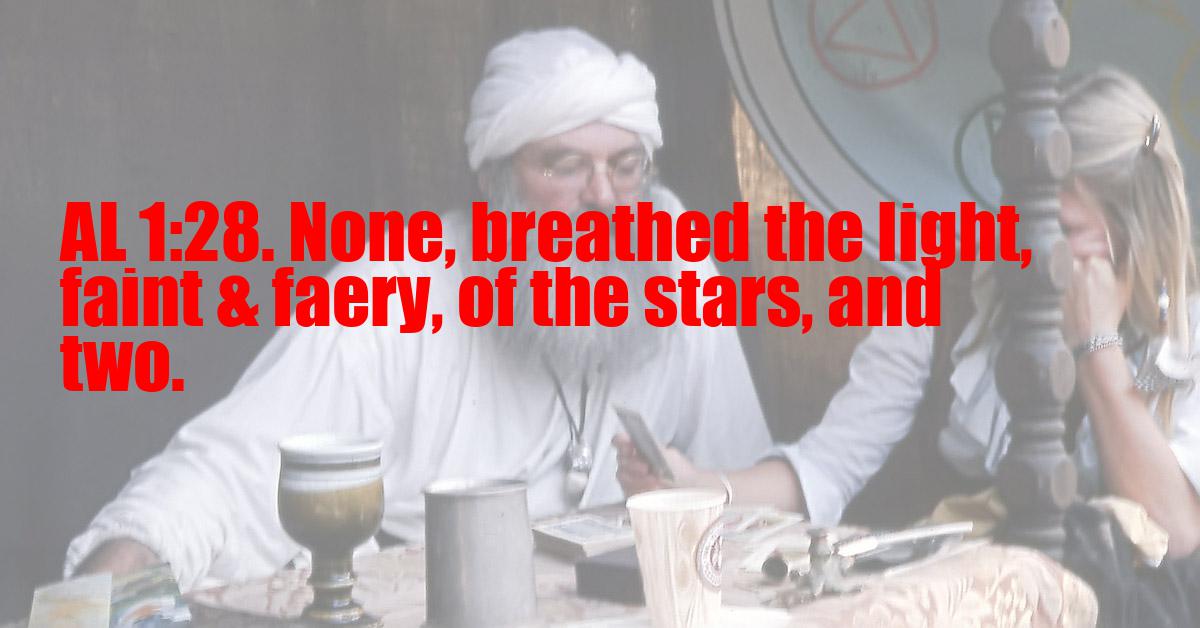 Bethsheba Comment:
This verse sums to 2002 by the Reversal Cipher.

None, breathed the light, faint & faery, of the stars, and two.

The Djeridensis Comment
(28-29.) Nuit is that which is equally 0 & 2. This Equation 0=2 the Master-Key of the Understanding of the Nature of the Universe.
She answered: None and Two. This also is a marvel of number, and is the Truth of the Essence of Nature of all Things, the Root of the Tree of Thought, as I shall shew elsewhere.

The New Comment
Now appears the plain statement of the Perfect Metaphysick. It may be as well to quote the essential passages from 'Berashith' in connexion with this matter.
"I ASSERT THE ABSOLUTENESS OF THE QABALISTIC ZERO."
When we say that the Cosmos sprang from 0, what kind of 0 do we mean? By 0 in the ordinary sense of the term we mean "absence of extension in any of the categories".
When I say "No cat has two tails" I do not mean, as the old fallacy runs, that "Absense-of-cat possesses two tails"; but that "In the category of two-tailed things, there is no extension of cat".
Nothingness is that about which no positive proposition is valid. We cannot truly affirm: "Nothingness is green, or heavy, or sweet".
Let us call time, space, being, heaviness, hunger, the categories. If a man be heavy and hungry, he is extended in all these, besides, of course, many more. But let us suppose these five are all. Call the man X; his formula is then Xt+s+b+h+h. If he now eat he will cease to be extended in hunger; if he be cut off from time and gravitation as well, he will now be represented by the formula Xs+b. Should he cease to occupy space and to exist, his formula would then be X0. This expansion is equal to 1; whatever X may represent, if it be raised to the power of 0 (this meaning mathematically "If it be extended in no dimension or category"), the result is Unity, and the unknown factor X is eliminated.
Now if there was in truth 0, "before the beginning of years", THAT 0 WAS EXTENDED IN NONE OF THE CATEGORIES, FOR THERE COULD HAVE BEEN NO CATEGORIES IN WHICH IT COULD EXTEND! If our 0 was the ordinary 0 of mathematics, there was not truly absolute 0, for 0 is, as I have shown, dependent on the idea of categories. If these existed, then the whole question is merely thrown back; we must reach a state in which 0 is absolute. Not only must we get rid of all subjects, but of all predicates. By 0 (in mathematics) we really mean 0n, where n is the final term of a natural scale of dimensions, categories, or predicates. Our Cosmic Gee, then, from which the present universe arose, was Nothingness, extended in no categories, or, graphically, 00. This expression is in its present form meaningless. Let us discover its value by a simple mathematical process.
00 = 01-1 = 01/01 ( Multiply by 1 = n/n )
Then 01/n x n/0s = 0 x ∞
Now the multiplying of the infinitely great by the infinitely small results in SOME UNKNOWN FINITE NUMBER EXTENDED IN AN UNKNOWN NUMBER OF CATEGORIES. It happened, when this our Great Inversion took place, from the essence of all nothingness to finity extended in innumerable categories, that an incalculably vast system was produced. Merely by chance, chance in he truest sense of the term, we are found with gods, men, stars, planets, devils, colours, forces, and all the materials of the cosmos; and with time, space, and causality, the conditions limiting and involving them all.
Remember that it is not true to say that our 0 to the 0 existed; nor that it did not exist. The idea of existence was just as much unformulated as that of toasted cheese.
But 00 is a finite expression, or has a finite phase, and our universe is a finite universe; its categories are themselves finite, and the expression "infinite space" is a contradiction it terms. The idea of an absolute and of an infinite God is relegated to the limbo of all similar idle and pernicious perversions of truth. Infinity remains; but only as a mathematical conception as impossible in nature as the square root of -1."
This passage was written in 1902, E.V., before the revelation of the Law. It remains true that ‘infinite space is a contradiction in terms’, and so on; but this is no argument against the Cosmogeny of this Book. For above the Abyss every idea soever is necessarily a contradiction in terms; see Liber 418 for the demonstration of this.
There is much more on these points in Liber Aleph, and in "The Urn".
"Breathed" and "light" are highly significant words, implying the duality of creation in breath – inspiration and expiration – and that of vibratory light; while breath is also Aleph, whose card is numbered Zero; and Light is L.V.X. 120, the Rosy Cross, wherein the Positive is dissolved in the Negative.