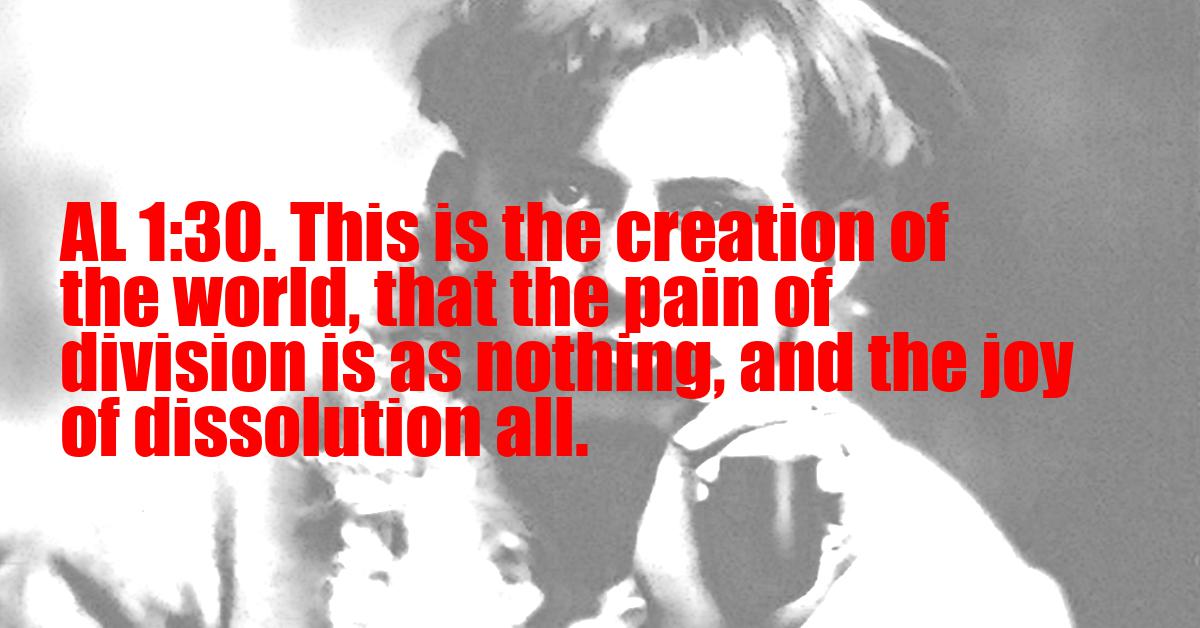 Bethsheba Comment:
Note that all is 61 and Ain (nothing) is 61. Cross-reference with 1:46 ~ "Nothing is a secret key of this law. Sixty-one the Jews call it...". The fastest resolution for "all or nothing" thinking is first to adopt "all and nothing" thinking before turning to more nuanced perspectives. Life and death are not black or white but simply states of consciousness.

This is the creation of the world, that the pain of division is as nothing, and the joy of dissolution all.

The Djeridensis Comment
Nuit shews the object of creating the Illusion of Duality.
She said: The world exists as two, for only so can there be known the Joy of Love, whereby are Two made One. Aught that is One is alone, and has little pain in making itself two, that it may know itself, and love itself, and rejoice therein.

The New Comment
This verse is written for men who are still in division, and sore about it; the pain is only in their idea of it. One should compare this thought with the Freudian psychology, which regards all separation from the 'Mother' as heroic but painful. But has a hero really no compensations? Besides, separation is itself a relief, just so soon as the strain becomes irksome, as in parturition.
As to "the joy of dissolution" the reference is to Samadhi, the trance in which Subject and Object become one. In this orgiastic ecstasy is experienced at first; later, the character of the consciousness changes to continuously calm delight, and later still, the delight deepens in a manner wholly indescribable. The technical terms used by Oriental Initiates to denote these conditions are untranslatable; in any case, they serve rather to darken counsel.
There is a Qabalistic aphorism concerning the words 'nothing' and 'all'; for this and similar matters see the Appendix. {WEH NOTE: The Appendix has not yet been recovered}.