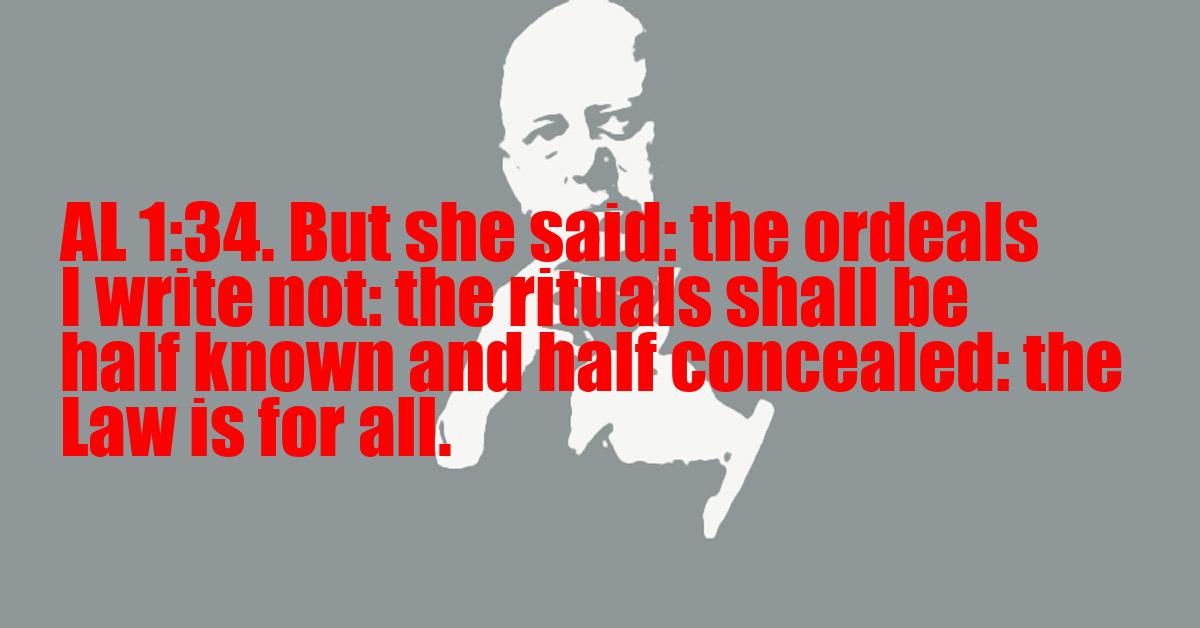 Bethsheba Comment:
Replace Ordeals with the hebrew word for not; לא / LA with the gematria of 31..
Take the Greek word for rituals: ιεροτελεστια / Ierotelestia with the reverse gematria of 547 (as in the last verse).
Lastly take the Greek word for Law: Θελημα with the gematria of 93.
LA + ιεροτελεστια + Da'ath - concealed + Θελημα + all = 561.
561 is the gate value of the right-sided Palace of the Daleth. This Daleth represented the door the dead, dreamers and magicians took out of this world and into the spirit realm.
Note how before all is added the sum is 500 indicating that the sphere of responsibility for writing of these matters belongs to the Prince Priest. Cross reference with 1:15.

But she said: the ordeals I write not: the rituals shall be half known and half concealed: the Law is for all.

The Djeridensis Comment
She replies.
She bade me know that the ordeals may not be written, since each man must go through a furnace of his own kindling. The Rituals: some were fitted for all men: some are fitted to one person, each making his own; and also there are those whose virtue lies in the silence wherewith they are begirt.
(34-35.) The Book AL is the Law for All Mankind.
The Book AL, Liber AL vel Legis, which I wrote down as I heard the Voice of Aiwass mine Holy Guardian Angel, in the City of Cairo in the Spring (April 8, 9, & 10) of the year 1904 of the Vulgar Era, is the Law. This Law is the Law for all men alike.

The Old Comment
The first demand is refused, or, it may be, is to be communicated by another means than writing.
[It has since been communicated.]
The second is partially granted; or, if fully granted, is not to be made wholly public.
The third is granted unconditionally.

The New Comment
The Ordeals are at present carried out unknown to the Candidate by the secret Magick Power of The Beast. Those who are accepted by Him for initiation testify that these Ordeals are frequently independent of His conscious care. They are not, like the traditional ordeals, formal, or identical for all; the Candidate finds himself in circumstances which afford a real test of conduct, and compel him to discover his own nature, to become aware of himself by bringing his secret motives to the surface.
Some of the Rituals have been made accessible, that is, the Magical Formulae have been published. See "The Rites of Eleusis", "Energized Enthusiasm", "Book 4, Part III", "etc".
Note the reference to 'not' and 'all'. Also the word 'known' contains the root GN, 'to beget' and 'to know'; while 'concealed' indicates the other half of the Human Mystery.