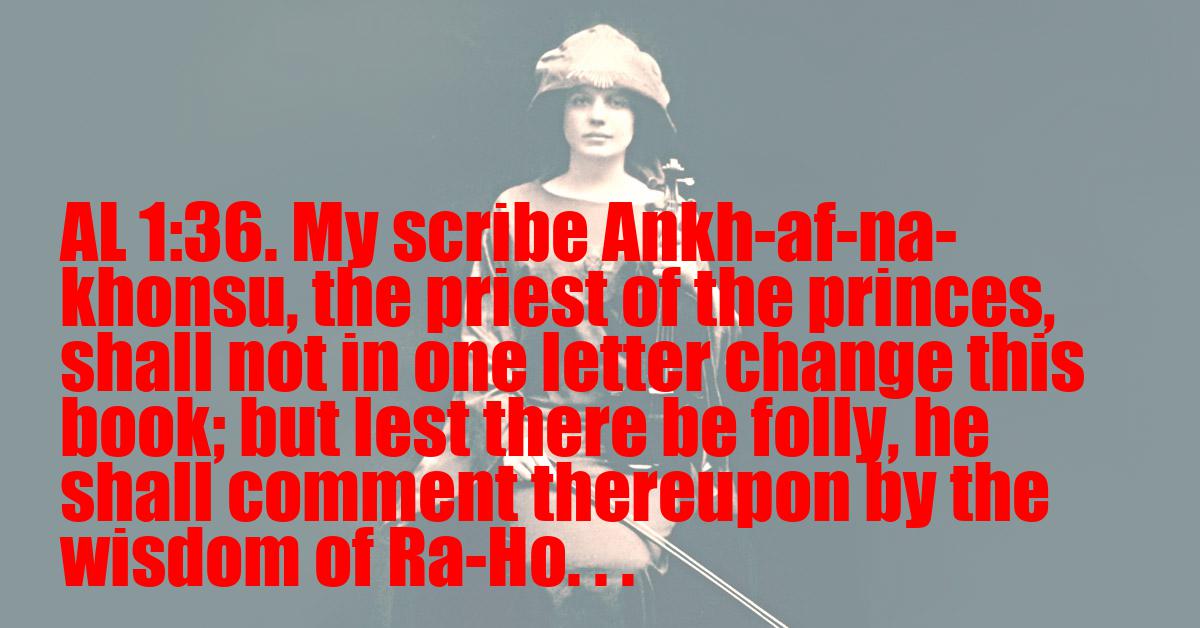 Bethsheba Comment:
Obviously if even one letter of gematria is changed then the value of the verse changes both numerically and in spiritual resonance with the idea the number represents. However in 2013, the current OHO of the Ordo Templi Orientis; Frater Hymenaeus Beta - chose to risk the curse of Ankh af na khonsu and change the letter F of fill in verse III:37 to K. A subsequent debate enveloped the Thelemic community with over 80% of Thelemites against the change. See this thread at the Lashtal community forum for one such discussion. Note how the change to the text disturbs the gematria:
To stir me or still me! Aum! let it fill me! = 777 (by Reversal Cipher).

My scribe Ankh-af-na-khonsu, the priest of the princes, shall not in one letter change this book; but lest there be folly, he shall comment thereupon by the wisdom of Ra-Hoor-Khuit.

The Djeridensis Comment
666 identified with Ankh-f-n-Khonsu.
I am in some way, One and the same Man and Ankh-f-n-Khonsu, whose Stélè helped to bring about the writing of that Book.
AL: The MS. the sole authentic text: 666 to abstain from editing it.
I am not to change it in one letter; for not only was mine [Originally "my"][11] ear at the service of Aiwass, but also mine hand. The effect of this is made plain elsewhere.
666 to comment on AL to guard against false interpretations.
I comment on this Book, lest there be folly; for many are the Secret Sayings [Originally "mysteries"][12] and obscure in the text thereof. It would be easy for the clever and the crafty to distort the true meaning of Aiwass so as to suit their own conceits, as hath been seen of old time in the cases of the Words of the Masters, the Qur'an, and the so-called Scriptures of the Christians.[13]
666: His Curse upon any that should seek to distort the Book, or His comment.
Thus as a safeguard against such, I, by the wisdom of Ra-Hoor-Khuit, do now foresee and guard against all fraud and false ways of reading the Book in simple and plain language. And I lift up my voice and curse with the Great Curse of a Magus of Power him that shall seek to turn my Word from its Truth.

The Old Comment
The first strict charge not to tamper with a single letter of this book.
The comment is to be written "by the wisdom of Ra-Hoor-Khuit," "i.e." by open, not by initiated wisdom.

The New Comment
Again we find the words Prince and Priest, but differently placed in their phrase.
The Beast is here definitely identified with the priest of the 26th Dynasty whose Stele forms the Pantacle (so to speak) of the new Magick. He is moreover identified with the scribe. It is of immense importance to the stability of the Law to have a Book not merely verbally but literally inspired, so that even errors in spelling and grammar have a secret significance. (That this must be so is guaranteed by the literary preeminence and impeccable orthography of the Beast as a man). But the great thing is the Standard to which all disputes may be referred. It is also necessary to give weight to the authority of The Beast, lest ignorance, folly, or cunning misinterpret the text.