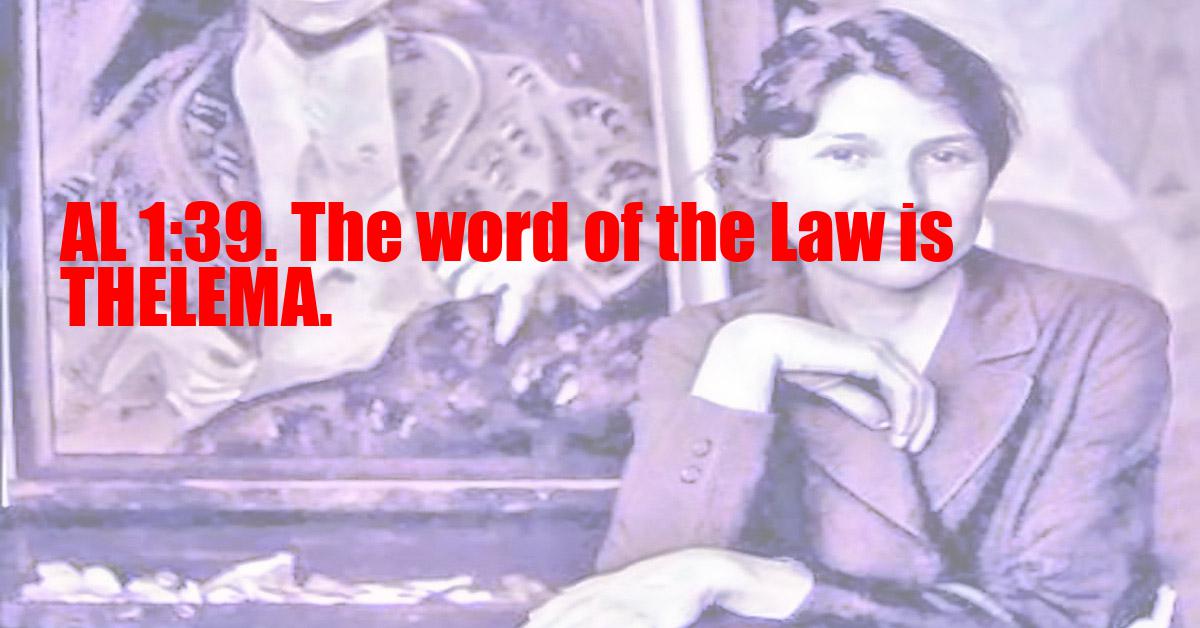 The word of the Law is θέλημα.

The Djeridensis Comment
θέλημα the Word of the Law.
The word of the Law is θέλημα. That is, this word is defined in minute detail by the secret value of the letters, numbers, sounds, virtues in Nature, and all other functions [Originally "qualities"][17] of this Greek name for Will.

The Old Comment
Compare Rabelais. Also it may be translated, "Let Will and Action be in harmony."
But Θελημα {Thelema} also means Will in the higher sense of Magical One-pointedness, and in the sense used by Schopenhauer and Fichte.
I suggest —
The the essential את {Aleph-Taw} , Azoth, etc., = Θε.
Word Chokmah, Thoth, the Logos, the Second Emanation.
of the Partitive, Binah the Great Mother.
the Chesed, the paternal power, reflection of the "The" above.
Law Geburah, the stern restriction.
is Tiphereth, visible existence, the balanced harmony of the worlds.
Θελημα {Thelema} The idea embracing all this sentence in a word.
Or —
Θ {Theta} The = ט {Teth} the Lion, "Thou shalt unite all these symbols into the form of a Lion."
ε {Epsilon} Word = ה {He} the letter of Breath, the Logos.
λ {Lambda} of = ל {Lamed}, ♎ {Libra} the Equilibrium.
η {Eta} the = ח {Cheth} 418, Abrahadabra.
μ {Mu} Law = מ {Mem} the Hanged Man, or Redeemer.
α {Alpha} is = א {Aleph} the 0 (zero, Nuit, which is Existence).
Θελημα {Thelema} the sum of all.
(Thelema is, of course, the Greek for Will. See Rabelais's Abbey of Thelema, in Gargantua.)

The New Comment
By 'the word' one means the magical formula, symbol, or expression.
Study the whole nature of the number 93, that of Θελημα {Thelema} in the Appendix. {WEH NOTE: Appendix not yet recovered.}
Liber Aleph has also much wisdom upon the Will. After absorbing "Berashith", and seeing that Will has come by Chance, the question arises, is Chance in any way bound by Necessity? Is there a limit to possibility? Could there, for example, be a Something which is not resolvable into 0 to the 0 power? The question of αναγκη {Alpha-Nu-Alpha-Gamma-Kappa-Eta} confronts the Magus in His meditations. For this verse, though, we may take things very simply and obviously: the change from the Osiris formula to that of Horus is intelligible enough. (See Comment on verse 49).