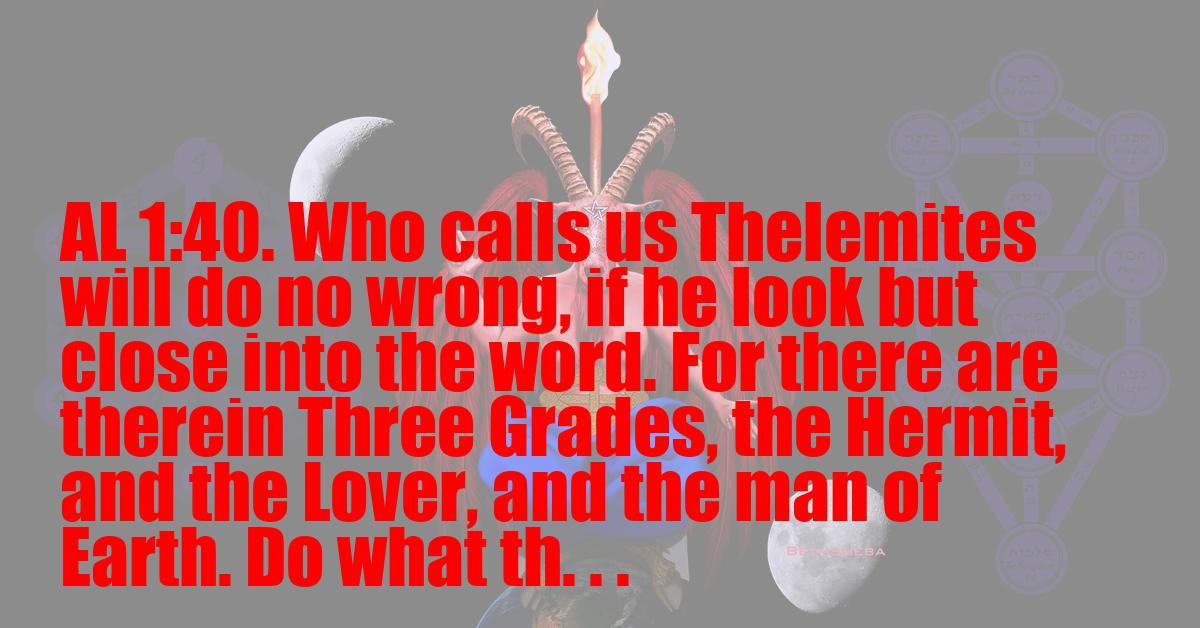 Who calls us Thelemites will do no wrong, if he look but close into the word. For there are therein Three Grades, the Hermit, and the Lover, and the man of Earth. Do what thou wilt shall be the whole of the Law.

The Djeridensis Comment
Thelemites defined: the three Degrees of Attainment.
We who accept this Law may rightly be called Thelemites, if this word be defined in terms of its secret values, as in the case of the word Thelema itself. There are three real Grades in the Order, as distinct from the formal Grades of the A∴A∴, and these Three Grades are described in my Book called The Vision and the Voice, and elsewhere.
The Law stated and explained.
Do what thou wilt shall be the whole of the Law — That is: the Law of a man’s Nature is to fulfil the purpose for which he is truly fitted.

The Old Comment
Θε {Theta-epsilon}, the Hermit, י {Yod} invisible, yet illuminating. The A ∴ A ∴
λη {lambda-eta}, the Lover, ז {Zain} visible as is the lightning flash. The College of Adepts.
… μα {mu-alpha}, the Man of Earth, פּ {Pe} the Blasted Tower. The 3 Keys add up to 31 = לא {Lamed-Aleph} Not and אל {Aleph-Lamed} God. Thus is the whole of Θελημα {Thelema} equivalent to Nuit, the all-embracing.
See the Tarot Trumps for further study of these grades.
Θε {Theta-epsilon} = 14, the Pentagram, rule of Spirit over ordered Matter. Strength and Authority (ט {Teth} and ה {He}) and secretly 1 + 4 = 5, the Hierophant ו {Vau}. V. Also: ♌ ♈ {Leo Aries}, the Lion and the Ram. "Cf." Isaiah. It is a "millennial" state.
λη {lambda-eta} = 38, the Key-word Abrahadabra, 418, divided by the number of its letter, 11. Justice or Balance and the Charioteer or Mastery. A state of progress; the church militant.
μα {mu-alpha} = 41, the Inverted Pentagram, matter dominating spirit. The Hanged Man and the Fool. The condition of those who are not adepts.
"Do what thou wilt" need not only be interpreted as licence or even as liberty. It may for example be taken to mean Do what thou (Ateh) wilt; and Ateh is 406 = תו {Taw-Vau} = T, the sign of the cross. The passage might then be read as a charge to self-sacrifice or equilibrium.
I only put forward this suggestion to exhibit the profundity of thought required to deal even with so plain a passage.
All the meanings are true, if only the interpreter be illuminated; but if not, they are all false, even as he is false.
(P.S. There was a sub-intention in the above paragraphs for the benefit of – Dwarfs!)