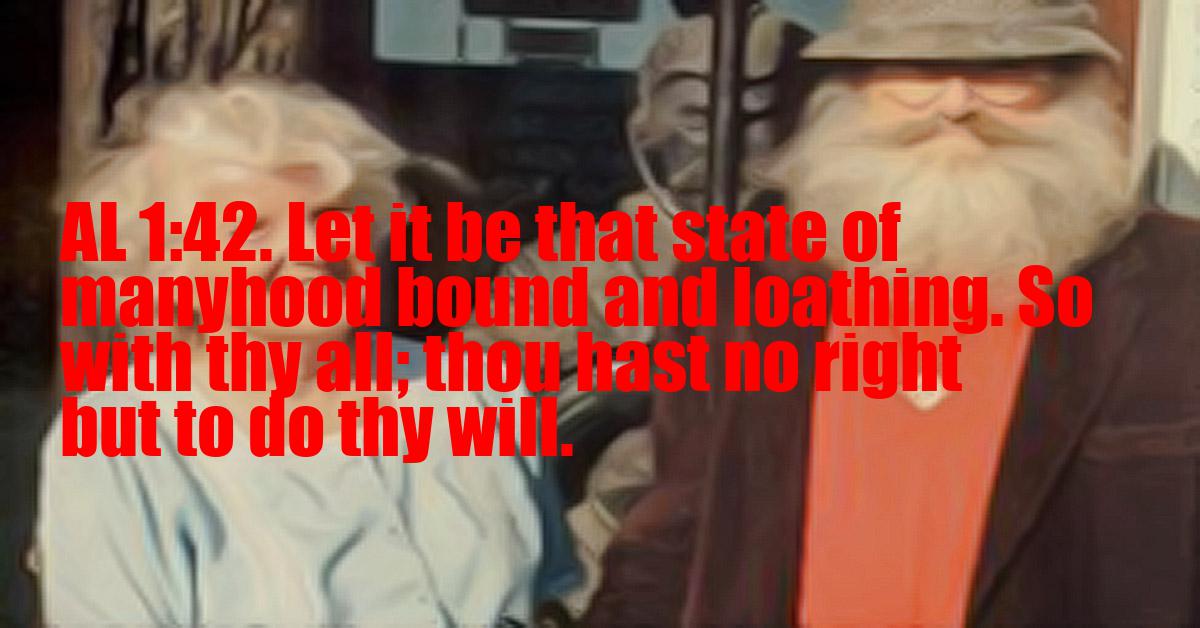 Bethsheba Comment:
thou hast no right but do thy θελημα = 700.

Let it be that state of manyhood bound and loathing. So with thy all; thou hast no right but to do thy will.

The Djeridensis Comment
(42-43.) The Right of Man.
This case may be taken as a guide to other problems of ethics. The rule is in truth single, the same in essence for all matters of conduct. Each has the perfect right to do his Will, that for which he is fit; all other use of power is an abuse.

The Old Comment
(41-42.) Interference with the will of another is the great sin, for it predicates the existence of another. In this duality sorrow consists. I think that possibly the higher meaning is still attributed to "will."

The New Comment
"Manyhood bound and loathing." An organized state is a free association for the common weal. My personal will to cross the Atlantic, for example, is made effective by co-operation with others on agreed terms. But the forced association of slaves is another thing.
A man who is not doing his will is like a man with cancer, an independent growth in him, yet one from which he cannot get free. The idea of self-sacrifice is a moral cancer in exactly this sense.
Similarly, one may say that not to do one's will is evidence of mental or moral insanity. When "duty points one way, and inclination the other", it is proof that you are not one, but two. You have not centralized your control. This dichotomy is the beginning of conflict, which may result in a Jekyll-Hyde effect. Stevenson suggests that man may be discovered to be a "mere polity" of many individuals. The sages knew it long since. But the name of this polity is Choronzon, mob rule, unless every individual is absolutely disciplined to serve his own, and the common, purpose without friction.
It is of course better to expel or destroy an irreconcilable. "If thine eye offend thee, cut it out." The error in the interpretation of this doctrine has been that it has not been taken as it stands. It has been read: If thine eye offend some artificial standard of right, cut it out. The curse of society has been Procrustean morality, the ethics of the herd-men. One would have thought that a mere glance at Nature would have sufficed to disclose Her scheme of Individuality made possible by Order.