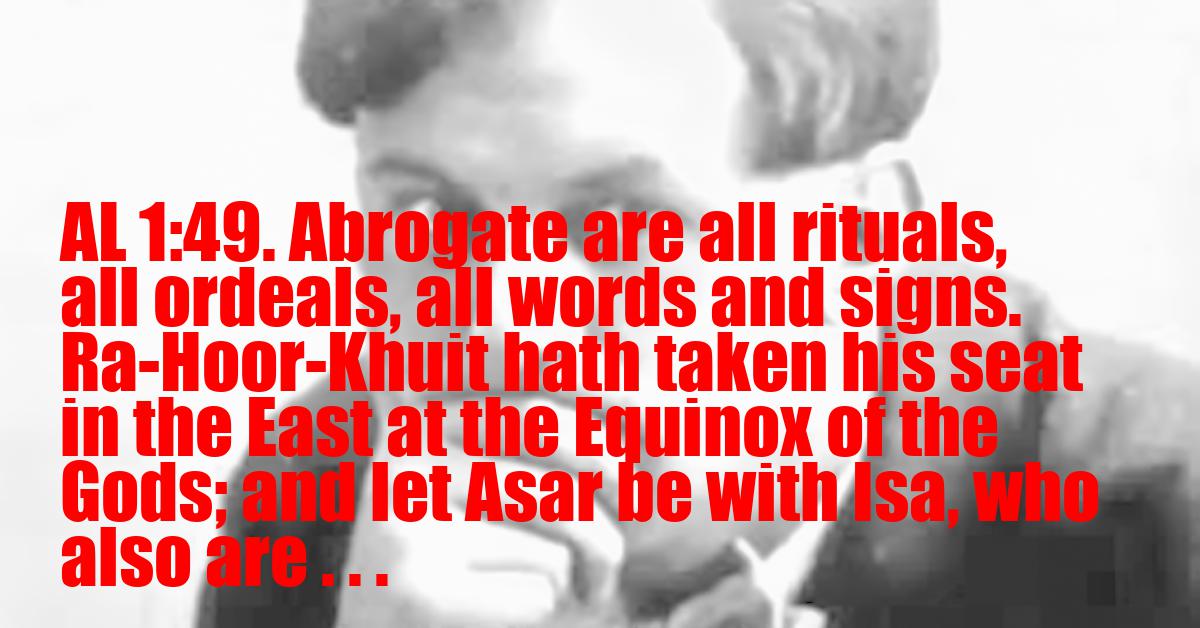 Abrogate are all rituals, all ordeals, all words and signs. Ra-Hoor-Khuit hath taken his seat in the East at the Equinox of the Gods; and let Asar be with Isa, who also are one. But they are not of me. Let Asar be the adorant, Isa the sufferer; Hoor in his secret name and splendour is the Lord initiating.

The Djeridensis Comment
The New Aeon: All previous formulæ now obsolete. The New Initiation-Ritual indicated.
All secret keys of the former Magick of the Aeon of the Dying God are now useless, since the Lord of this New Aeon of which I am the prophet is the Crowned and Conquering Child. Asar, the Man who suffers[19], is no longer the type of Godhead to which Man must aspire. He needs no more to die and rise again: His great Work is now to come to know Himself as the Child ever-living. sinless, perfect, the all-shining Sun.

The Old Comment
Declares a New System of Magic and initiation. Asar — Isa — is now the Candidate, not the Hierophant. Hoor — see Cap. III. — is the Initiator.

The New Comment
This verse declares that the old formula of Magick – the Osiris-Adonis-Jesus-Marsyas-Dionysus-Attis-etcetera formula of the Dying God – is no longer efficacious. (It never was efficacious; it was merely the least deficient formula possible I the Aeon of Pisces just past.) It rested on the ignorant belief that the Sun died every day, and every year, and that its resurrection was a miracle.
The Formula of the New Aeon recognizes Horus, the Child crowned and conquering, as God. We are all members of the Body of God, the Sun; and about our System is the Ocean of Space. This formula is then to be based upon these facts. Our "Evil", "Error", "Darkness", "Illusion", whatever one chooses to call it, is simply a phenomenon of accidental and temporary separateness. If you are "walking in darkness", do not try to make the sun rise by self-sacrifice, but wait in confidence for the dawn, and enjoy the pleasures of the night meanwhile.
The general illusion is to the Equinox Ritual of the G∴ D∴ where the officer of the previous six months, representing Horus, took the place of the retiring Hierophant, who had represented Osiris.

Isa is the Legendary "Jesus", for which Canidian concoction the prescription is to be found in my book bearing that title, "Liber DCCCLXXXVIII".