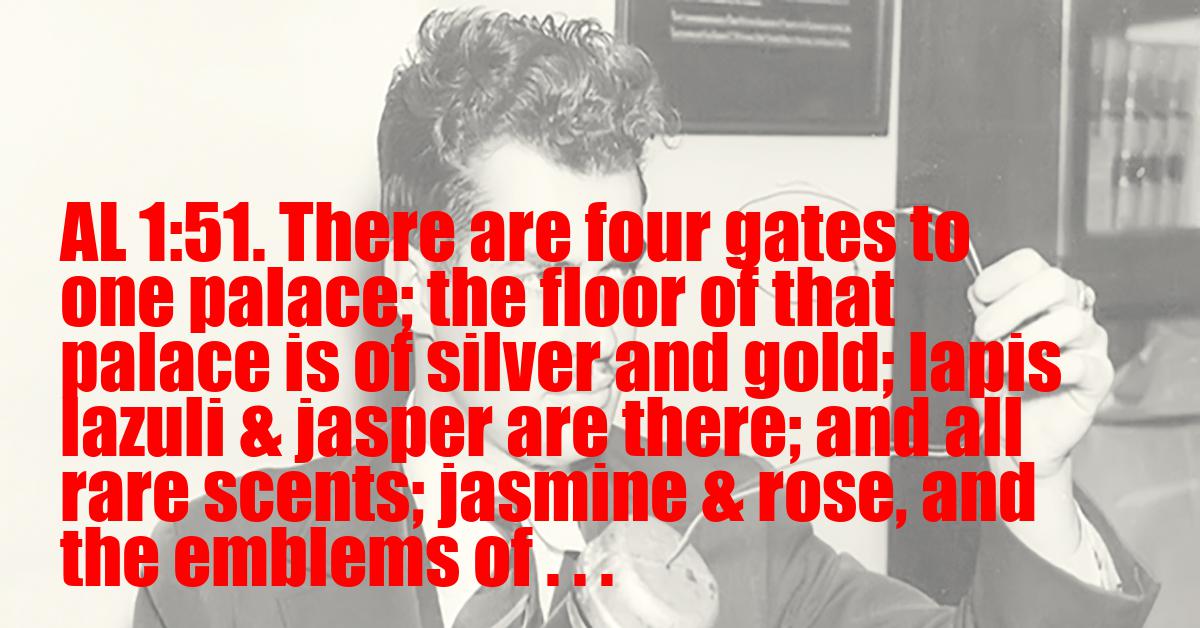 Bethsheba Comment:
The four gates to one palace refer to the path with four letters. See diagram:

Note that if the 4 letters represent the 4 ways to attain, their original attribution is Shin for fire, Tav for time, Tsade for childbirth & Qoph for the woman. Light, Life, Love, Liberty?
Silver + Gold = 418.
SINK is an acronym of Samekh, Yod, Nun & Kaph and is of significance to the riddle of 2:76.

There are four gates to one palace; the floor of that palace is of silver and gold; lapis lazuli & jasper are there; and all rare scents; jasmine & rose, and the emblems of death. Let him enter in turn or at once the four gates; let him stand on the floor of the palace. Will he not sink? Amn. Ho! warrior, if thy servant sink? But there are means and means. Be goodly therefore: dress ye all in fine apparel; eat rich foods and drink sweet wines and wines that foam! Also, take your fill and will of love as ye will, when, where and with whom ye will! But always unto me.

The Sanctuary described in a Figuree: also its approaches.
The Palace of Wisdom has four gates, which the man who I take to train for kingship [originally "the Aspirant"][22] may enter singly or all at once. That is, there are four ways to attain; some may find it best to take them one at a time, others all at once [originally "together"][23]. The gates or ways are described in secret symbols; these I explain elsewhere.
Adepts: are they still in danger of falling away?
It is then asked: can one who has come to Wisdom fall therefrom?
Many means of Grace. Thelemites to live beautifully and joyously.
The answer is that there are many means of safety. I warn you against fear. Being once free, refuse to admit that any course of conduct can destroy you. I urge you to beware of the pride of the spirit, of the thought of anything as evil or unclean. Make all things serve you in your Magick as weapons. Therefore, be goodly, not humble, base, timid, or frail. Dress like a dandy: eat like a gourmet: drink port and champagne as do the hunting squires and young men about Town.
Love: its law is complete Freedom.
Also as to Love: be wholly free to make the best of your gifts in all respects, fearless and shameless.
All acts to be understood as Acts of Worship of Nuit.
Yet all these acts must not be done for their results in success or pleasure, and the like; for they are holy and to be performed strictly as acts [originally "for their own sakes, but strictly as Acts"][24] of Love under Will in worship of Nuit; that is, to fulfil all that may be and your own whole Nature by so doing.

The Old Comment
The candidate will be brought through his ordeals in divers ways.
The Order is to be of freemen and nobles.