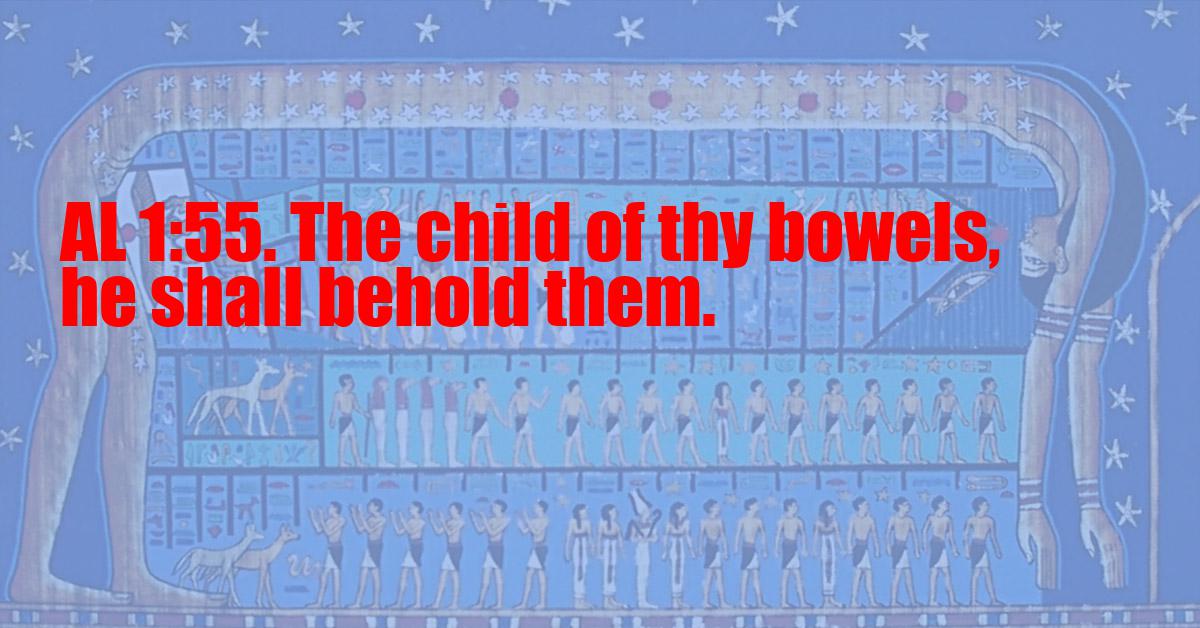 The child of thy bowels, he shall behold them.

The Djeridensis Comment
(55-56.) A "child" of 666 to behold in AL those secrets which are hidden from 666. Nature and Office of this Child.
I am promised: "the child of thy bowels ... shall behold them." [originally "promised that the child of my bowels shall behold them."][25] This involves the future, and demands special comment elsewhere. The coming of that child is defined in such terms that when he arrives he may be surely known.
Prophets and Scriptures of the past party true: AL contains the whole truth of Conscious, and some of Unconscious Thought.
Nuit admits that all the prophets of the Past have spoken, and the sacred scriptures before given by the Masters to men contain, some truth. But they have applied to local conditions, and those of time; thus all are partly false. Liber AL has no such limits, so it is true for all. I have learnt all the secrets of all the old cults, purged them of partial trend, and balanced them: this is my knowledge of them complete so far as the Reason is concerned; I have also some, though not all, Truth of the Inmost Order.
(Through this Book AL has it been given unto me to perfect almost wholly this Utmost of Truth.)

The New Comment
Here is the first reference to a 'child' who will complete the Work connected with this Book. It is only necessary to say that this Child has indeed appeared, fulfilling in a very remarkable way the peculiar conditions indicated in this Book. The full account is too elaborate to insert in this place; it will be found in the Record of my Initiation to the Grade of Magus. here I note only the time of his conception, An. XII, Sun in 0 degrees Cancer.
The matter of this child is exceedingly obscure; and it may prove difficult to determine between rival claimants. Frater Lampada Tradam had not a bad case. I believe that many candidates may appear; Time and the Hour run through the roughest day; and there is one very definite test which can hardly be evaded.
It is evident, moreover, from Chapter II, verse 39, that there is more than one 'child'. Further comment on this matter is to be found in the appropriate places.
An XVI, Sun in Capricornus. I decide to summarize the essential facts of this matter as follows:
In the Magical Diaries of The Beast, we find that during the beginning of 1914, again at the end of that year, and finally between March 26 and May 30 of that year, he made three separate series of Magical Operations. The First two unconsciously, and the last one more or less consciously, toward the attainment of the Grade of Magus.
As a result of these operations, he met a series of persons who acted as officers in the ceremony of his initiation. We are here only concerned with Jeanne Robert Foster, nee Jeanne Julie Ollivier.
On july 8, 10, 13, 14, 23, Sept. 12 (2 operations) Sept. 16, Magical Operations were performed with the object of begetting a child. On Sept. 23, this woman, who had taken the mystic name of Soror Hilarion, assisted The Beast in obtaining the word of the Equinox, this word being, so to speak, a concentrated symbolic representation of the events of the six months following. This word obtained by her was "Mebulae" which, though it was not apparent at the time, is evidently suggestive of the birth of a Star.
Exactly nine months later than this Equinox, Frater Achad became a Babe of the Abyss, as is described very fully indeed in his record, some of the essential part of which will be found in the Appendix.
{WEH NOTE: The Appendix has not been recovered. See Frater Achad's Liber XXXI, not the same as Crowley's Liber XXXI, for more information.}
As it turned out, this child justified his identification as such, not only in the cipher (there cometh one – i.e. Achad – to follow thee) but by discovering "the key of it all."