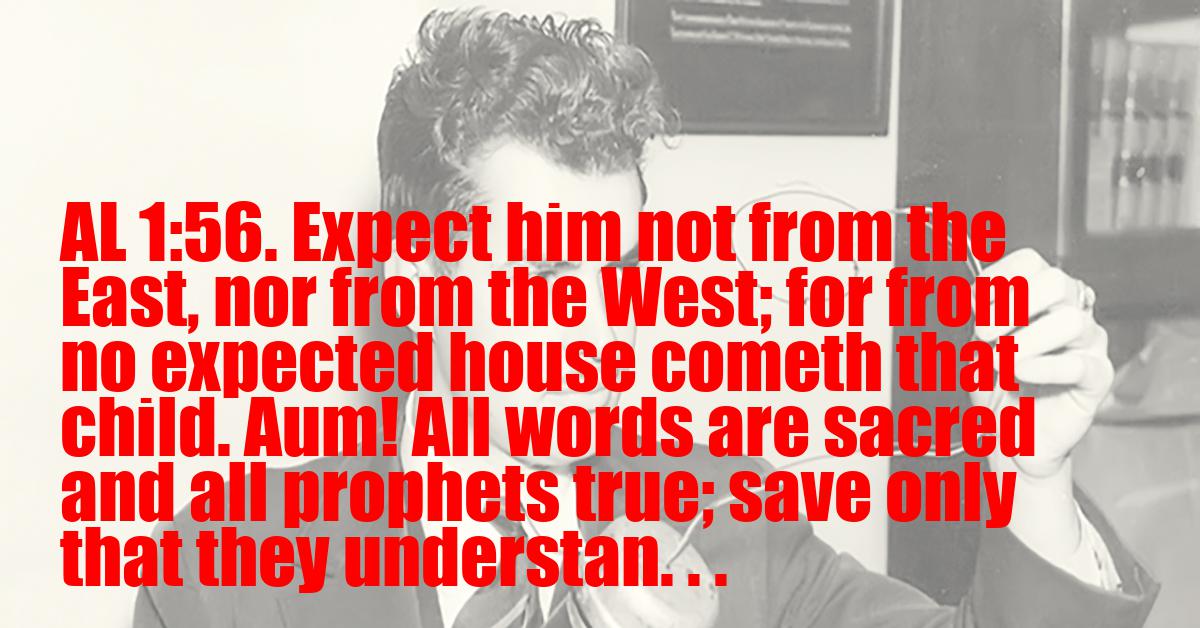 Expect him not from the East, nor from the West; for from no expected house cometh that child. Aum! All words are sacred and all prophets true; save only that they understand a little; solve the first half of the equation, leave the second unattacked. But thou hast all in the clear light, and some, though not all, in the dark.

The Djeridensis Comment
(55-56.) A "child" of 666 to behold in AL those secrets which are hidden from 666. Nature and Office of this Child.
I am promised: "the child of thy bowels ... shall behold them." [originally "promised that the child of my bowels shall behold them."][25] This involves the future, and demands special comment elsewhere. The coming of that child is defined in such terms that when he arrives he may be surely known.
Prophets and Scriptures of the past party true: AL contains the whole truth of Conscious, and some of Unconscious Thought.
Nuit admits that all the prophets of the Past have spoken, and the sacred scriptures before given by the Masters to men contain, some truth. But they have applied to local conditions, and those of time; thus all are partly false. Liber AL has no such limits, so it is true for all. I have learnt all the secrets of all the old cults, purged them of partial trend, and balanced them: this is my knowledge of them complete so far as the Reason is concerned; I have also some, though not all, Truth of the Inmost Order.
(Through this Book AL has it been given unto me to perfect almost wholly this Utmost of Truth.)

The New Comment
All previous systems have been sectarian, based on a traditional cosmography both gross and incorrect. Our system is based on absolute science and philosophy. We have "all in the clear light", that of Reason, because our Mysticism is based on an absolute Scepticism. But at the time of this writing I had very little mystic experience indeed, as my record shows. The Fact is that I was far, far from the Grade even of Master of the Temple. So I could not properly understand this Book; how then could I effectively promulgate it? I comprehended but dimly that it contained my Word; for the Grade of Magus then seemed to me unthinkably high above me. Also, let me say that the True Secrets of this Grade (of Magus) are unfathomable and awful beyond all expression; the process of initiation thereto was continuous over years, and contained the most sublime mystic experiences – beyond any yet recorded by man – as mere incidents in its terrific Pageant.
The "equation" is the representation of Truth by Word.