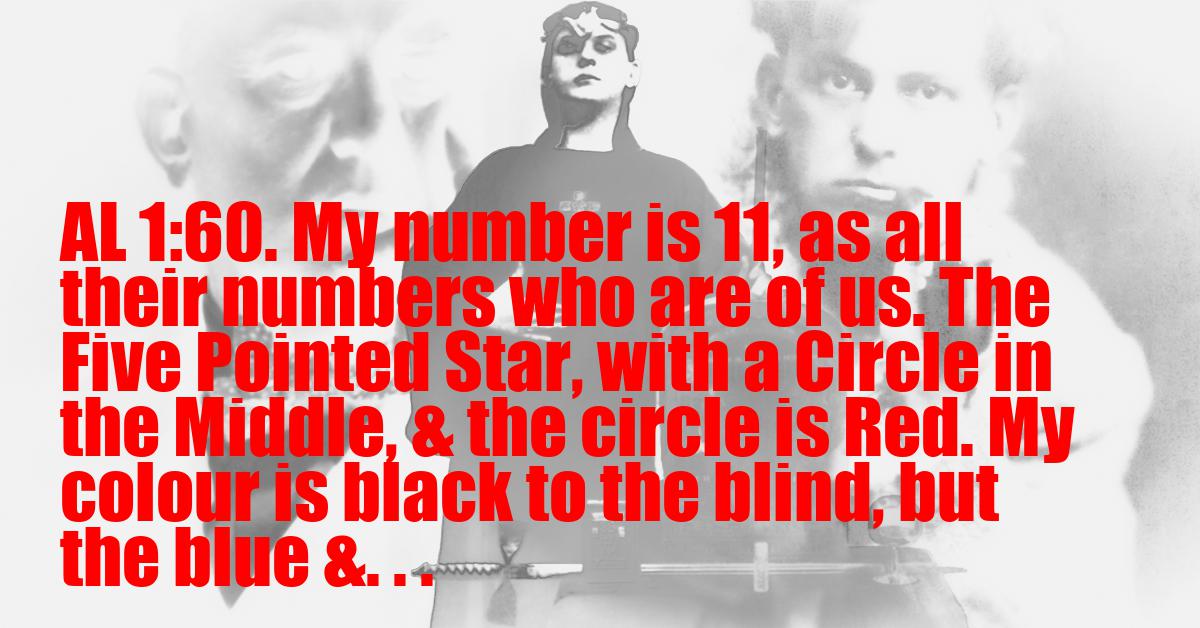 My number is 11, as all their numbers who are of us. The Five Pointed Star, with a Circle in the Middle, & the circle is Red. My colour is black to the blind, but the blue & gold are seen of the seeing. Also I have asecret glory for them that love me.

The Djeridensis Comment
Nuit: Her symbolic Figure.
Nuit declares her Nature in a Riddle of Number and Colour and Form: this also is elsewhere explained being a matter of Magick and Wisdom proper to vowed Students rather than to the profane.

The Old Comment
Nu = 56 and 5 + 6 = 11.
The Circle in the Pentagram? See Liber NV.
The uninitiated perceive only darkness in Night: the wise perceive the golden stars in the vault of azure.
Concerning that Secret Glory it is not here fitting to discourse.

The New Comment
The general significance of the number 11 is Magick, particularly that form of it which is Love under Will; for it unites the 5 and the 6. Thus Abrahadabra has 11 letters; and 418 = 11 x 38.
This number must be thoroughly studied by the Qabalah. See Appendix {WEH NOTE: Appendix not yet recovered.}
In the original MSS. the second paragraph begins "The shape of my star is" — and then breaks off — the Scribe was unable to hear what was being said. This was presumably because his mind was so full of preconceived ideas about the different kinds of stars appropriate to various ideas. An alternate phrase was subsequently dictated to the Scarlet Woman, and inserted in the manuscript by her own hand.
This star is the pentagram, with the single point at the top. The points touch the parts of Nuith's body as shown in the Stele. The earth-point marks the position of her feet, the fire-point, that of her hands, the other three points — air, spirit, and water respectively — refer to "my secret centre, my heart, and my tongue."