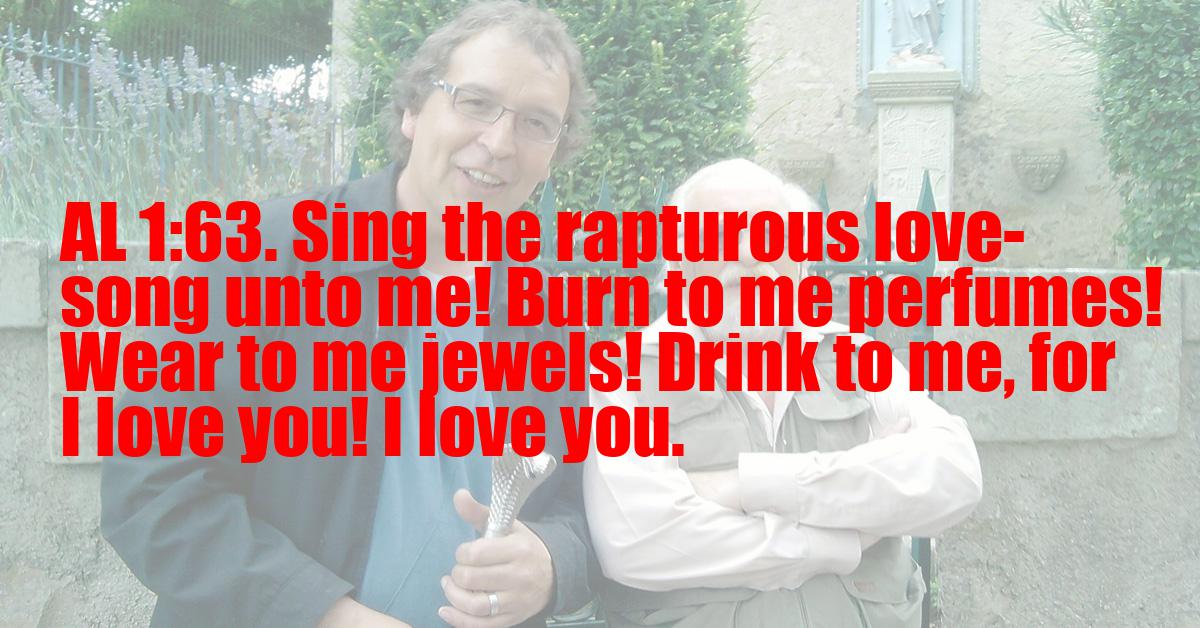 Sing the rapturous love-song unto me! Burn to me perfumes! Wear to me jewels! Drink to me, for I love you! I love you!

The Djeridensis Comment
(62-63.) Nuit: Her public Cult.
Now lastly she ordains her public cult. Her image, she being All-Desired, shall be a living Woman, calling to her that Spirit which shall make her perfect in Event. Of all this Rite I have written in another place.[31]

The Old Comment
(62-63.) Again practical and literal. Yet the "Secret Temple" refers also to a knowledge incommunicable — save by experience.

The New Comment
All those acts which excite the divine in man are proper to the Rite of Invocation.
Religion, as understood by the vile Puritan, is the very opposite of all this. He — it — seems to wish to kill his — its — soul by forbidding every expression of it, and every practice which might awaken it to expression. To hell with this Verbotenism!
In particular, let me exhort all men and all women, for they are Stars! Heed well this holy Verse!
True Religion is intoxication, in a sense. We are told elsewhere to intoxicate the innermost, not the outermost; but I think that the word "wine" should be taken in its widest sense as meaning that which brings out the soul. Climate, soil, and race change conditions; each man or woman must find and choose the fit intoxicant. Thus hashish in one or the other of its forms seems to suit the Moslem, to go with dry heat; opium is right for the Mongol; whiskey for the dour temperament and damp cold climate of the Scot.
Sex-expression, too, depends on climate and so on, so that we must interpret the Law to suit a Socrates, a Jesus, and a Burton, or a Marie Antoinette and a de Lamballe, as well as our own Don Juans and Faustines.
With this expansion, to the honour and glory of Them, of Their Natures, we acclaim therefore our helpers, Dionysus, Aphrodite, Apollo, Wine, Woman, and song.
Intoxication, that is, ecstasy, is the key to Reality. It is explained in "Energized Enthusiasm" ("The Equinox" I (9)) that there are three Gods whose function is to bring the Soul to the Realization of its own glory: Dionysus, Aphrodite, Apollo; Wine, Woman, and Song.
The ancients, both in the highest civilizations, as in Greece and Egypt, and in the most primitive savagery, as among the Buriats and the Papuans, were well aware of this, and made their religious ceremonies 'orgia', "Works". Puritan foulness, failing to understand what was happening, degraded the word 'orgies' to mean debauches. It is the old story of the Fox who lost his tail. If you cannot do anything, call it impossible; or, if that be evidently absurd, call it wicked!
It is critics who deny poetry, people without capacity for Ecstasy and Will who call Mysticism moonshine and Magick delusion. It is manless old cats, geldings, and psychopaths, who pretend to detest Love, and persecute Free Women and Free Men.
Verbotenism has gone so far in certain slave-communities that the use of wine is actually prohibited by law!
I wish here to emphasise that the Law of Thelema definitely enjoins us, as a necessary act of religion, to "drink sweet wines and wines that foam". Any free man or woman who resides in any community where this is verboten has a choice between two duties: insurrection and emigration.
The furtive disregard of Restriction is not Freedom. It tends to make men slaves and hypocrites, and to destroy respect for Law. {WEH NOTE: Evidently Crowley wrote this around the time of the American Prohibition. He denies virtue in illegal use, but advocates vigorous effort to change law.}
Have no fear: two years after Vodka was verboten, Russia, which had endured a thousand lesser tyrannies with patience, rose in Revolution.
Religious ecstasy is necessary to man's soul. Where this is attained by mystical practices, directly, as it should be, people need no substitutes. Thus the Hindus remain contentedly sober, and care nothing for the series of Invaders who have occupied their country from time to time and governed them. But where the only means of obtaining this ecstasy, or a simulacrum of it, known to the people, is alcohol, they must have alcohol. Deprive them of wine, or beer, or whatever their natural drink may be, and they replace it by morphia, cocaine, or something easier to conceal, and to take without detection.
Stop that, and it is Revolution. As long as a man can get rid of his surplus Energy in enjoyment, he finds life easy, and submits. Deprive him of Pleasure, of Ecstasy, and his mind begins to worry about the way in which he is exploited and oppressed. Very soon he begins furtively to throw bombs; and, gathering strength, to send his tyrants to the gallows.