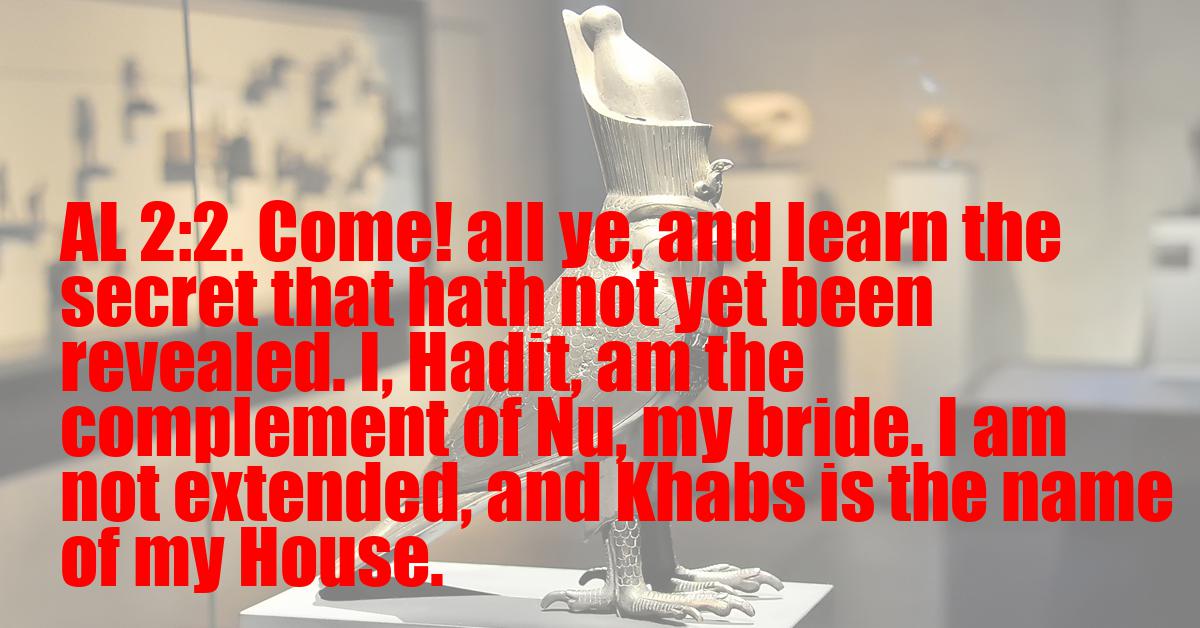 Bethsheba Comment:
Not = לא and is אל AL (God) backwards.
Learn + secret + לא revealed = 860.
The Shematria calculator has only one reference for 860 and it is oddly appropriate. It is in Hebrew and is from Isaiah 43:7. Translated it says: In my Name and to my Glory in my creation I have made him yes I have made him. 860 is also the sub-figura number of John St. John — Crowley's record of his magical retirement.
86 is the value of אלהים Elohim.
I * Hadit = 290 (see previous verse).
290 + complement - Nu - my bride = 300, which is the value of Hadit with the Reversal Cipher.
Note that the hebrew letter Beth ב is symbolic of a house.
לא + extended + Khabs + the name + my ב (house) = 418.

Come! all ye, and learn the secret that hath not yet been revealed. I, Hadit, am the complement of Nu, my bride. I am not extended, and Khabs is the name of my House.

The Djeridensis Comment
He summons all to learn the other half of the Secret Truth of Nature. She is one extreme without limit, he is the other. He hath no Nature of His own, for He is that to which all Events occur. His House, that is, the sphere of his action, is called Khabs, a Star. This is the Light which He conceals about Him through His Deeds of Love for Her, so that there may appear in glory the Record of those Works which pertain to any Point in Space.

The Old Comment
Nuit is Infinite Extension; Hadit Infinite Contraction. Khabs is the House of Hadit, even as Nuit is the house of the Khu, and the Khabs is in the Khu (I, 8). These theologies reflect mystic experiences of Infinite Contraction and Expansion, while philosophically they are the two opposing Infinites whose interplay gives Finity.

The New Comment
Khabs – 'a star' – is an unit of Nuit, and therefore Nuit Herself. This doctrine is enormously difficult of apprehension, even after these many years of study.
Hadit is the 'core of every star,' verse 6. He is thus the Impersonal Identity within the Individuality of 'every man and every woman.'
He is 'not extended;' that is, without condition of any sort in the metaphysical sense. Only in the highest trances can the nature of these truths be realized. It is indeed a suprarational experience not dissimilar to those characteristic of the "Star-Sponge Vision" previously described that can help us here. The trouble is that the truth itself is unfitted to the dualistic reason of "normal" mankind. Hadit seems to be the principle of Motion which is everywhere, yet is not extended in any dimension except as it chances to combine with the "Matter" which is Nuit. There can evidently be no manifestation apart from this conjunction. A "Khabs" or Star is apparently any nucleus where this conjunction has taken place. The real philosophical difficulty about this cosmogony is not concerned with any particular equation, or even with the Original Equation. We can understand x = ab, x = a, b, & c; and also 0degrees = pa + qb, whether pa - qb = 0 or not. But we ask how the homogeneity of both Nuit and Hadit can ever lead to even the illusion of "difference." The answer appears to be that this difference appears naturally with the self-realization of Nuit as the totality of possibilities; each of these, singly and in combination, is satisfied or set in motion by Hadit, to compose a particular manifestation. 0degrees could possess no signification at all, unless there were diverse dimensions wherein it had no extension. "Nothing" means nothing save from the point of view of "Two," just as "Two" is monstrous unless it is seen as a mode of "Nothing."
The above explanation appears somewhat disingenuous, since there is no means whatever of distinguishing any Union H + N = R from another. We must postulate a further stage. R (Ra-Hoor-Khuit) Kether, Unity, is always itself; but we may suppose that a number of such homogeneous positive manifestations may form groups differing from each other as to size and structure so as to create the illusion of diversity.