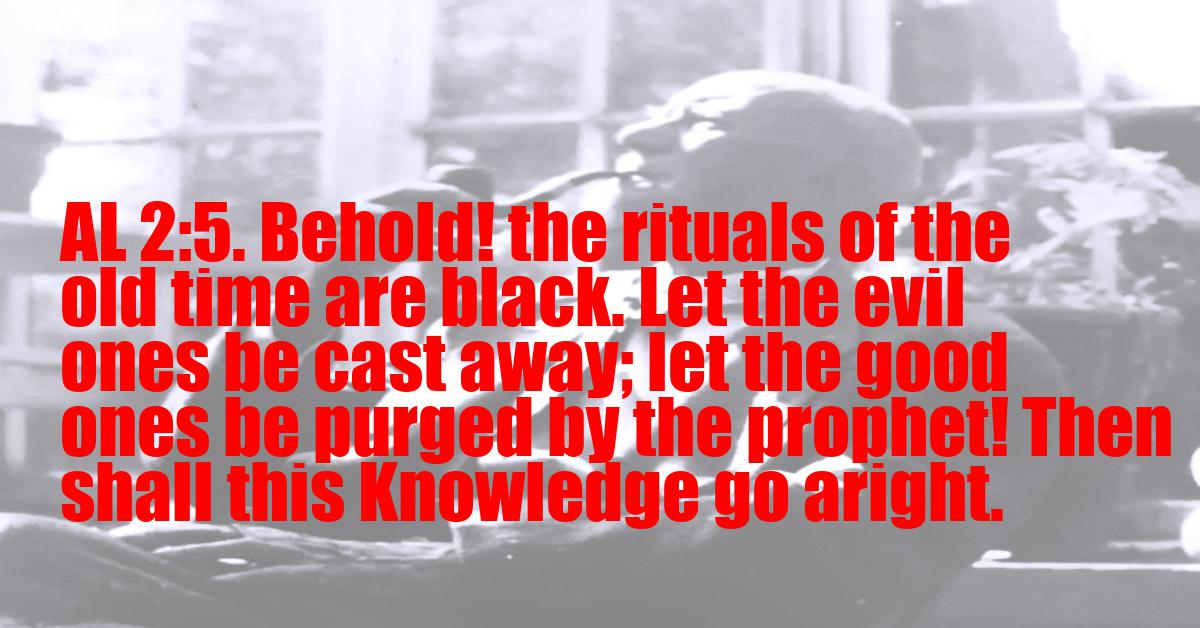 Bethsheba Comment:
The rituals of the old time are black = 919.
919 is the value of : בראשית ברא אלהים את השמים ואת הארץ, Genesis 1:1.
In this ancient cosmology, God dwells in darkness before dividing his duality (represented by the inside and outside of a circle) into light and darkness, day and night. However 919 is an error because the verbs and prepositions were never counted, as Crowley knew well. The true number of 1:1 is 700, and 800 by Reverse Cipher using notariqon.
Crowley's purge of old Aeon rituals resembles an estate sale. Here was an old beautiful house filled with rusted and decaying furniture. The removal men have been around and taken away everything that was no longer fit for purpose. The resortation experts came in and saved what they could, and then Crowley & his Scarlet Woman moved in with their own furniture and set about making the place a modern home. You can still see the ancient architecture behind the still wet plaster however.
Re: Da’ath. The Seven Palaces represent the Macrocosm & the Tree of Life represents the Microcosm. The Tree resonates with the Palaces however the Seventh Palace is split into Kether, Chokmah and Binah and so Da’ath is simply the intellectual knowledge of their unity in the Macrocosm. Crowley is perfectly correct that mere knowledge alone does not bring us closer to God.
One last matter; from the transcendental expansion of light in Tiphareth, all things of matter, including the body below, appear absolutely black. The intensity of the light allows nothing else but total contrast.

Behold! the rituals of the old time are black. Let the evil ones be cast away; let the good ones be purged by the prophet! Then shall this Knowledge go aright.

The Djeridensis Comment
I, the Beast 666, am then bidden to purge the ancient Modes of Magick, they being no longer valid in this new ‘time’ or Aeon of Horus. I am to reject those that have become false, either through the lapse of time, or the folly or malice of men; but to retain and make pure such as are Of All Truth, beyond Time to corrupt. By so doing shall the Truth now revealed to me go forth among men to make them free, without error.

The Old Comment
A reference to certain magical formulae known to the scribe of this book. The purification of said rituals is in progress at this time, An V.