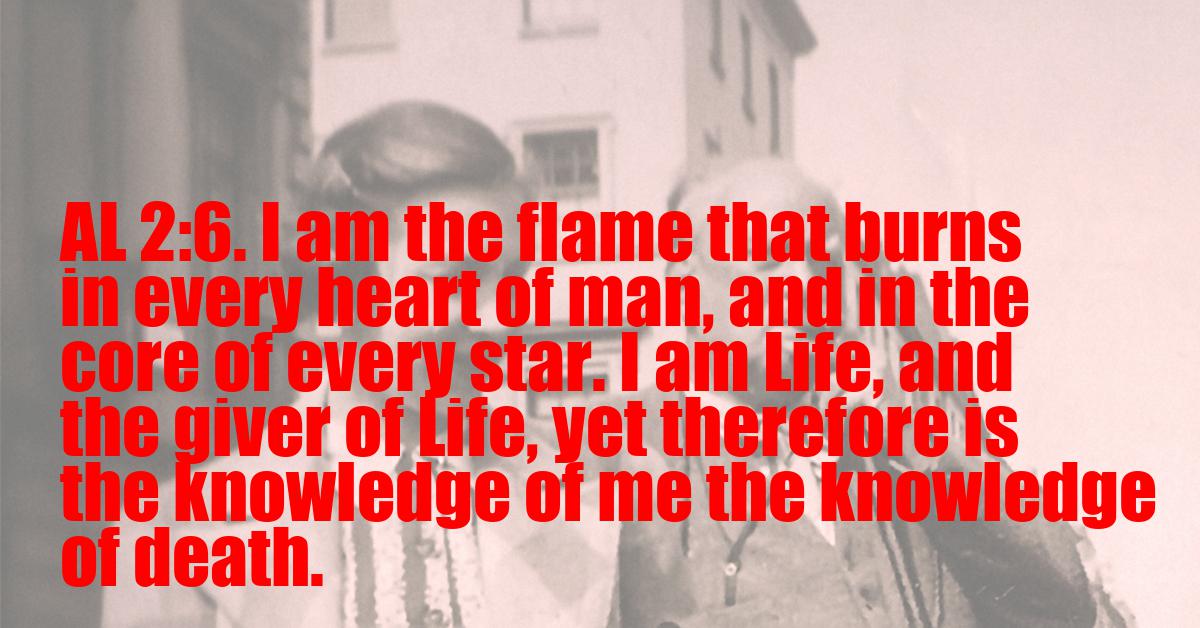 I am the flame that burns in every heart of man, and in the core of every star. I am Life, and the giver of Life, yet therefore is theknowledge of me the knowledge of death.

The Djeridensis Comment
Hadit resumes His account of His Nature. That Nature being what it is, it must be set forth in many symbols. He is the Fire-life behind the motion of living, and the Point about which every Star is centred. He is thus Any Point-of-View, any Centre to which all Events may be measured. He is life itself in its Essence, and He causes Life to appear to itself. For this reason is the knowledge of Him the knowledge of Death, since the meaning of Life implies death. Hadit saith "the knowledge of me": this is not against His former word that He shall be known never. It means only that death is one of the Events that must needs be known as soon as the nature of Life is known.

The Old Comment
Hadit is the Ego or Atman in everything, but of course a loftier and more secret thing than anything understood by the Hindus. And of course the distinction between Ego and Ego is illusion. Hence Hadit, who is the life of all that is, if known, becomes the death of that individuality.

The New Comment
It follows that, as Hadit can never be known, there is no death. The death of the individual is his awakening to the impersonal immortality of Hadit. This applies less to physical death than to the Crossing of the Abyss; for which see Liber 418, Fourteenth Aethyr. One may attain to be aware that one is but a particular 'child' of the Play of Hadit and Nuit; one's personality is then perceived as being a disguise. It is not only not a living thing, as one had thought; but a mere symbol without substance, incapable of life. It is the conventional form of a certain cluster of thoughts, themselves the partial and hieroglyphic symbols of an 'ego.' The conscious and sensible 'man' is to his Self just what the printed letters on this page are to me who have caused them to manifest in colour and form. They are arbitrary devices for conveying my thought; I could use French or Greek just as well. Nor is this thought, here conveyed, more than one ray of my Orb; and even that whole Orb is but the garment of Me. The analogy is precise; therefore when one becomes "the knower," it involves the 'death' of all sense of the Ego. One perceives one's personality precisely as I now do these printed letters; and they are forgotten, just as, absorbed in my thought, the trained automatism of my mind and body expresses that thought in writing, without attention on my part, still less with identification of the extremes involved in the process.