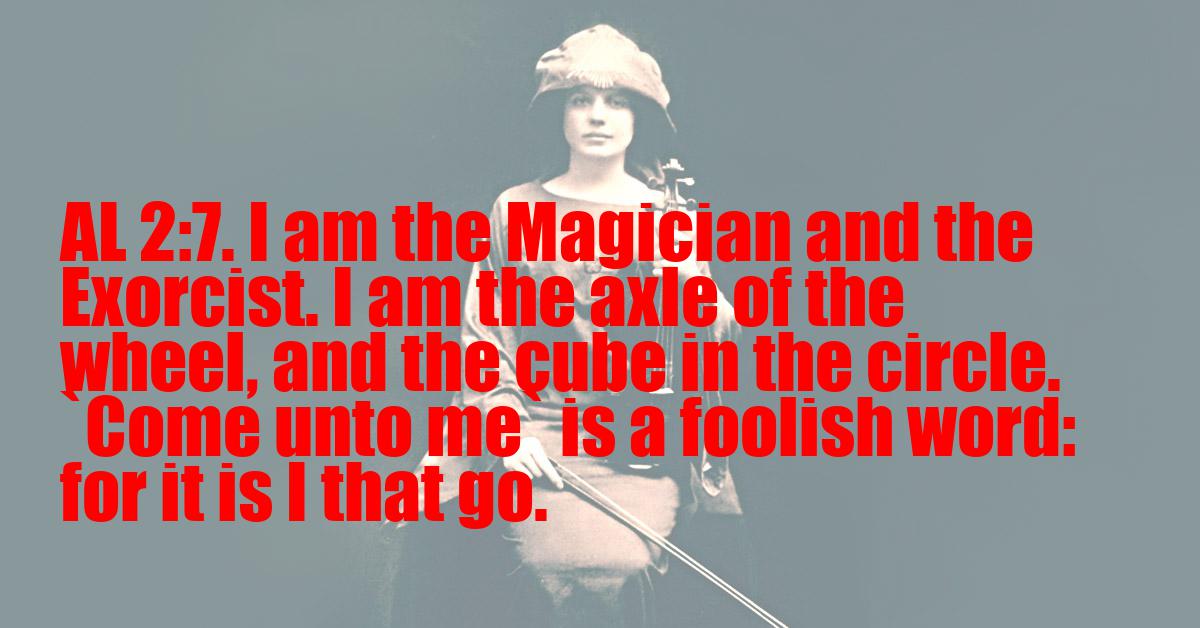 I am the Magician and the Exorcist. I am the axle of the wheel, and the cube in the circle. "Come unto me" is a foolish word: for it is I that go.

The Djeridensis Comment
Hadit is the Magician: that is, one who causes phantoms to arise: for all His Works with Nuit are but emblems chosen to show forth His Nature as it takes this Form or that, at its pleasure. He is the Exorcist: His Oath hath this Virtue, to drive away those phantoms as soon as their work is done, lest they be taken for things real. For all events are but tokens of His Being, as it appears in union with one or other form of Nuit, and in themselves but symbols. Hadit is that about whom all Events move. He is the Real, straight, square, and solid, in the midst of Perfection, which is none the less curved (that is, of female nature) equal at all points from Him, and real to thought, not to sense. He, being moved by each Event, goeth ever, and saith not ‘Come unto me,’ that Word of his Bride Nuit

The Old Comment
Hadit is both the Maker of Illusion and its destroyer. For though His interplay with Nuit results in the production of the Finite, yet His withdrawing into Himself is the destruction thereof.
"The axle of the wheel," another way of saying that He is the Core of Things.
"The cube in the Circle." "Cf." Liber 418, "The Vision and the Voice," 30th AEthyr.
"Come unto me" is a foolish word; for it is I that go. That is, Hadit is everywhere; yet, being sought, he flies. The Ego cannot be found, as meditation will show.

The New Comment
"It is I that go." The Book Aleph must be consulted for a full demonstration of this truth. We may say briefly that Hadit is Motion, that is, Change or 'Love.' The symbol of Godhead in Egypt was the Ankh, which is a sandal-strap, implying the Power to Go; and it suggests the Rosy Cross, the Fulfilment of Love, by its shape.
The Wheel and the Circle are evidently symbols of Nuith; this sentence insists upon the conception of Lingam-Yoni. But beyond the obvious relation, we observe two geometrical definitions. The axle is a cylinder set perpendicularly to the plane of the wheel; thus Hadit supplies the third dimension to Nuith. It suggests that Matter is to be conceived as Two-dimensional; that is, perhaps, as possessed of two qualities, extension and potentiality. To these Hadit brings motion and position. The wheel moves; manifestation now is possible. Its perception implies three-dimensional space, and time. But note that the Mover is himself not moved. The "cube in the circle" emphasizes this question of dimensions. The cube is rectilinear (therefore phallic no less than the axle); its unity suggests perfection projected as a "solid" for human perception; its square faces affirm balance, equity, and limitation; its six-sidedness sets it among the solar symbols. It is thus like the Sun in the Zodiac, which is no more than the field for His fulfilment in His going. He, by virtue of his successive relations with each degree of the circle, clothes Himself with an appearance of "Matter in Motion," although absolute motion through space is a meaningless expression (Eddington, Op, cit.). None the less, every point in the cube – there are 2 of them – has an unique relation with every point in the circle exactly balanced against an equal and opposite relation. We have thus Matter that both is and is not, Motion that both moves and moves not, interacting in a variety of ways which is infinite to manifest individuals, each of which is unlike any other, yet is symmetrically supported by its counterpart. Note that even at the centre of gravity of the cube no two rays are identical except in mere length. They differ as to their point of contact with the circle, their right ascension, and their relation with the other points of the cube.
Why is Nuith restricted to two dimensions? We usually think of space as a sphere. "None —- and two:" extension and potentiality are Her only projections of Naught. It is strange, by the way to find that modern mathematics says "Spherical space is not very easy to imagine" (Eddington, Op.cit.p.158) and prefers to attribute a geometrical form whose resemblance to the Kteis is most striking. For Nuit is, philosophically speaking, the archetype of the Kteis, giving appropriate Form to all Being, and offering every possibility of fulfilment of every several point that it envelops. But Nuith cannot be symbolized as three-dimensional, in our system; each unit has position by three spatial, and one temporal, coordinates. It cannot exist, in our consciousness, with less, as a reality. Each 'individual' must be a 'point-interval;' he must be the product of some part of the Matter of Nuit (with special energies) determined in space by his relations with his neighbours, and in time by his relations with himself.
It is evidently "a foolish word" for Hadit to say "Come unto me," as did Nuit naturally enough, meaning "Fulfil thy possibilities;" for who can "come unto" Motion itself, who draw near unto that which is in very truth his innermost identity?