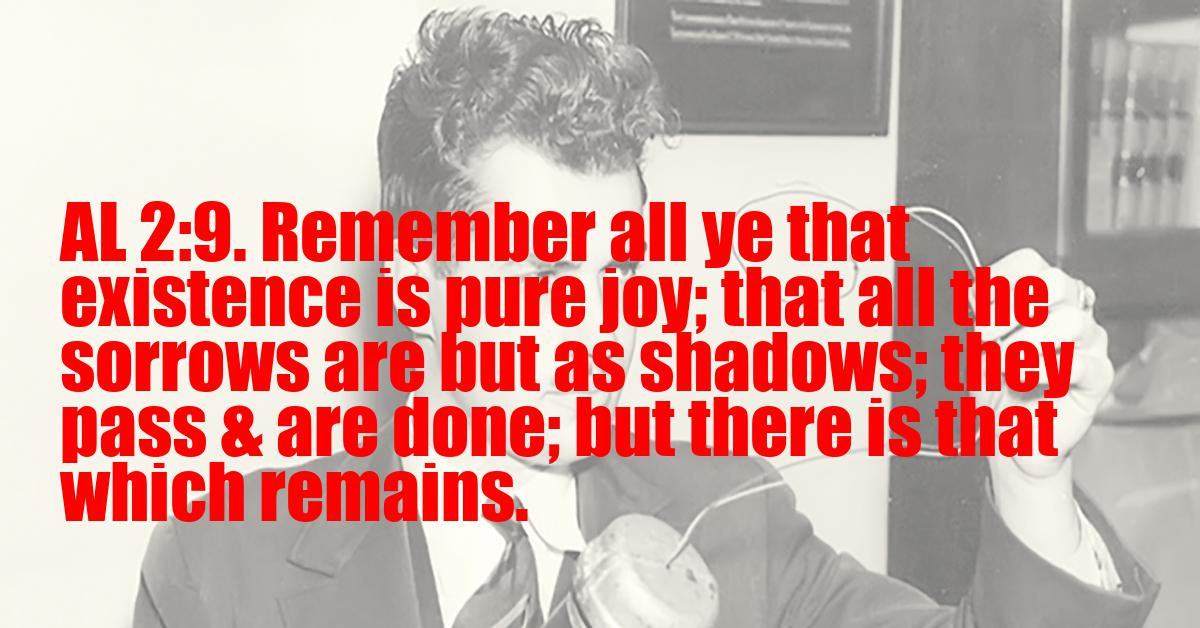 Remember all ye that existence is pure joy; that all the sorrows are but as shadows; they pass & are done; but there is that which remains.

The Djeridensis Comment
Hadit now sayeth to all that they should be mindful of the Nature of that which exists; it is pure joy, since all Events are Acts of Love under Will. The Shadow called Sorrow is caused by the error of thinking of any two Events as opposed or even distinct; which fault was in the first chapter of this Book thus condemned: "for thereby cometh hurt." (Hurt, in French, heurter, to jostle.) Sorrows, being thus errors of vision, not real in themselves, pass and are done as soon as the mind ceases to dwell on them; yet, being false thoughts about True Events, the Event endures, and the Point-of-View endures; so that Hadit hath attained His Will no less than in all other cases.

The Old Comment
Hence we pass naturally and easily to the sublime optimism of Verse 9. The lie is given to pessimism, not by sophistry, but by a direct knowledge.

The New Comment
This verse is very thoroughly explained in Liber Aleph. "All in this kind are but shadows" says Shakespeare, referring to actors. The Universe is a Puppet-Play for the amusement of Nuit and Hadit in their Nuptials; a very Midsummer Night's Dream. So then we laugh at the mock woes of Pyramus and Thisbe, the clumsy gambols of Bottom; for we understand the Truth of Things, how all is a Dance of Ecstasy. "Were the world understood, Ye would know it was good, a Dance to a lyrical measure!" The nature of events must be "pure joy;" for obviously, whatever occurs is the fulfilment of the Will of its master. Sorrow thus appears as the result of any unsuccessful – therefore, ill-judged – struggle. Acquiescence in the order of Nature is the ultimate Wisdom.
One must understand the Universe perfectly, and be utterly indifferent to its pressure. These are the virtues which constitute a Master of the Temple. Yet each man must act What he will; for he is energized by his own nature. So long as he works "without lust of result" and does his duty for its own sake, he will know that "the sorrows are but shadows." And he himself is "that which remains;" for he can no more be destroyed, or his true Will be thwarted, than Matter diminish or Energy disappear. He is a necessary Unit of the Universe, equal and opposite to the sum total of all the others; and his Will is similarly the final factor which completes the equilibrium of the dynamical equation. He cannot fail if he would; thus, his sorrows are but shadows - he could not see them if he kept his gaze fixed on his goal, the Sun.