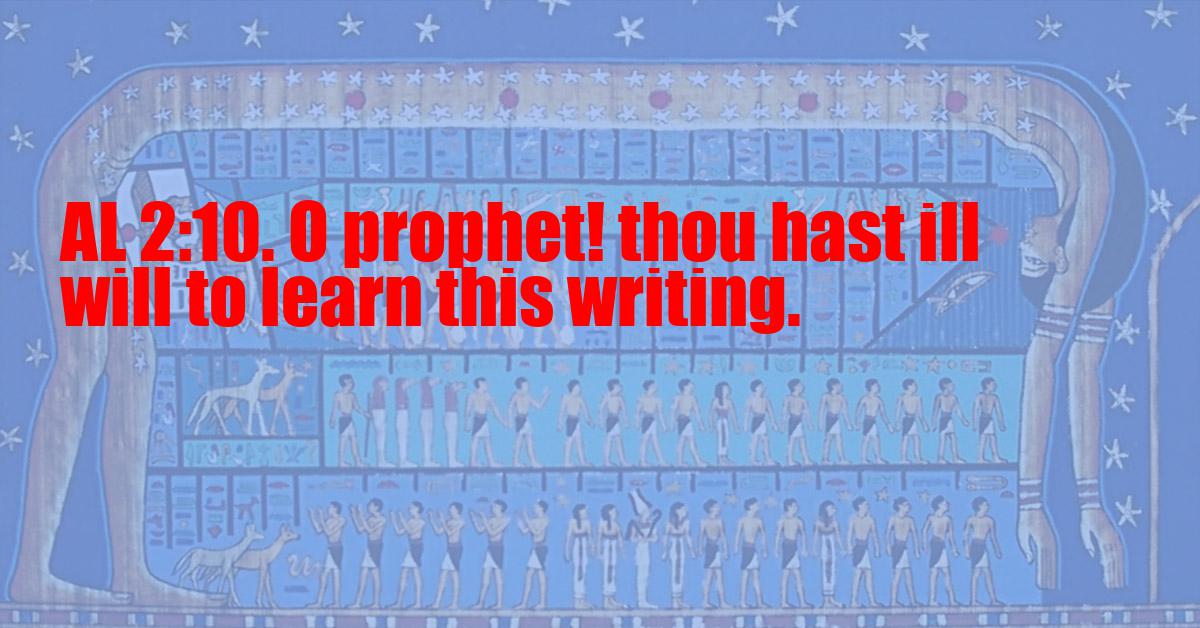 O prophet! thou hast ill will to learn this writing.

The Djeridensis Comment
(10-11-12.) Mine Angel, Aiwass, watching me as I wrote down His words, saw with what rage I withstood His Spirit. For in my deepest conscious mind I held most firm the First Noble Truth proclaimed by Gautama Buddha "Everything is Sorrow"; and on this thought I had built up all my spirit and mind for many days. This Word of Aiwass therefore struck to the heart of my most earnest thought; and I hated the hand and the pen which wrote against my will, in service to His. For He was of force to subdue me, to make me obey Him, that His Word might be written and go forth unto men to utter the New Law.

The Old Comment
The prophet who wrote this was at this point angrily unwilling to proceed.

The New Comment
As related in Equinox I, VII, I was at the time of this revelation, a rationalistic Buddhist, very convinced of the First Noble Truth: "Everything is Sorrow." I supposed this point of view to be an absolute and final truth – as if Apemantus were the only character in Shakespeare!
It is also explained in that place how I was prepared for this Work by that period of Dryness. If I had been in sympathy with it, my personality would have interfered. I should have tried to better my instructions.
See, in Liber 418, the series of visions by which I actually transcended Sorrow. But the considerations set forth in the comment on verse 9 lead to a simpler, purer, and more perfect attainment for those who can assimilate them in the subconscious mind by the process described in the comment on verse 6.
It may encourage certain types of aspirant if I emphasize my personal position. AIWAZ made no mistake when he spoke this verse – and the triumphant contempt of his tone still rings in my ear! After seventeen years of unparalleled spiritual progress, of unimaginably intense ecstasies, of beatitudes prolonged for whole months, of initiations indescribably exalted, of proof piled on proof of His power, His vigilance, His love, after being protected and energized with incredible aptness, I find myself still only too ready to grumble, nay even to doubt. It seems as if I resented the whole business. There art times when I feel that the amoeba, the bourgeois, and the cow represent the ABC of enviable creatures. There may be a melancholic strain in me, as one might expect in a case of renal weakness such as mine. In any event, it is surely a most overwhelming proof that AIWAZ is not myself, but my master, that He could force me to write verse 9, at a time when I was both intellectually and spiritually disgusted with, and despairing of, the Universe, as well as physically alarmed about my health.