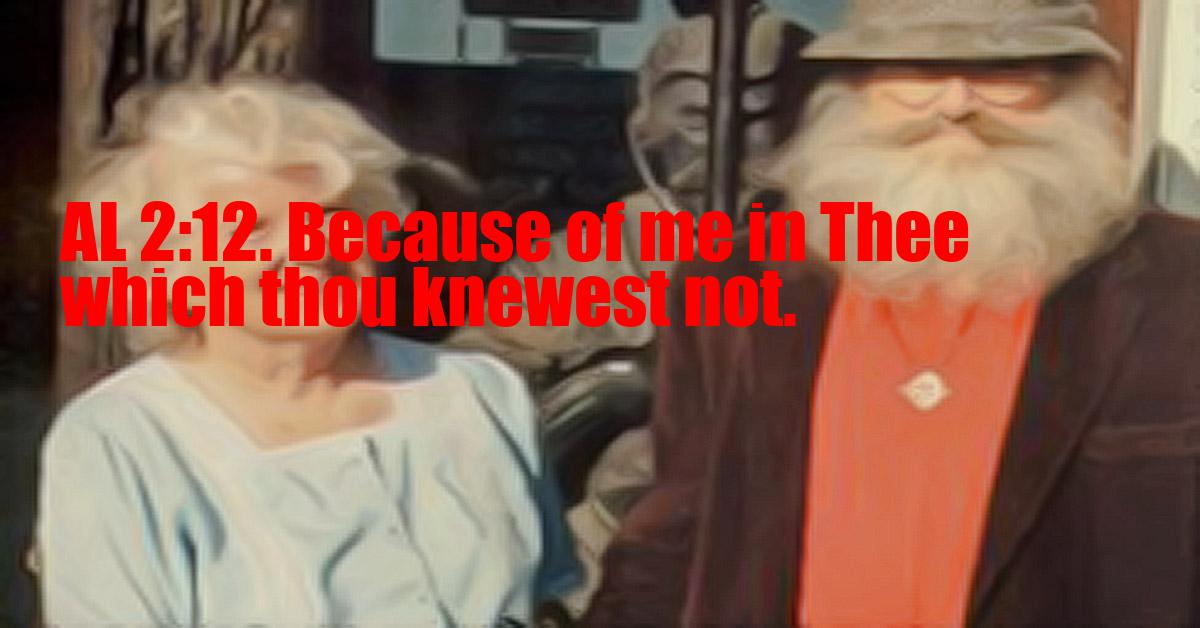 Because of me in Thee which thou knewest not.

The Djeridensis Comment
(10-11-12.) Mine Angel, Aiwass, watching me as I wrote down His words, saw with what rage I withstood His Spirit. For in my deepest conscious mind I held most firm the First Noble Truth proclaimed by Gautama Buddha "Everything is Sorrow"; and on this thought I had built up all my spirit and mind for many days. This Word of Aiwass therefore struck to the heart of my most earnest thought; and I hated the hand and the pen which wrote against my will, in service to His. For He was of force to subdue me, to make me obey Him, that His Word might be written and go forth unto men to utter the New Law.

The Old Comment
For the God was in him, albeit he knew it not.

The New Comment
The use of capitals "Me" and "Thee" emphasizes that Hadit was wholly manifested in The Beast. It is to be remembered that The Beast has agreed to follow the instructions communicated to Him only in order to show that 'nothing would happen if you broke all the rules.' Poor fool! The Way of Mastery is to break all the rules – but you have to know them perfectly before you can do this; otherwise you are not in a position to transcend them.
Aiwaz here explains that his power over me depended upon the fact that Hadit is verily "the core of every star." As is well known, there is a limit to the power of the hypnotist; he cannot overcome the resistance of the Unconscious of his patient. My own Unconscious was thus in alliance with Aiwaz; taken between two fires, my conscious self was paralyzed so long as the pressure lasted. It will be seen later – verses 61 to 69 – that my consciousness was ultimately invaded by the Secret Self, and surrendered unconditionally, so that, it proclaimed, loudly and gladly, from its citadel, the victory of its rightful Lord. The mystery is indeed this, that in so prosperous and joyous a city, there should still be groups of malcontents whose grumblings are occasionally audible.