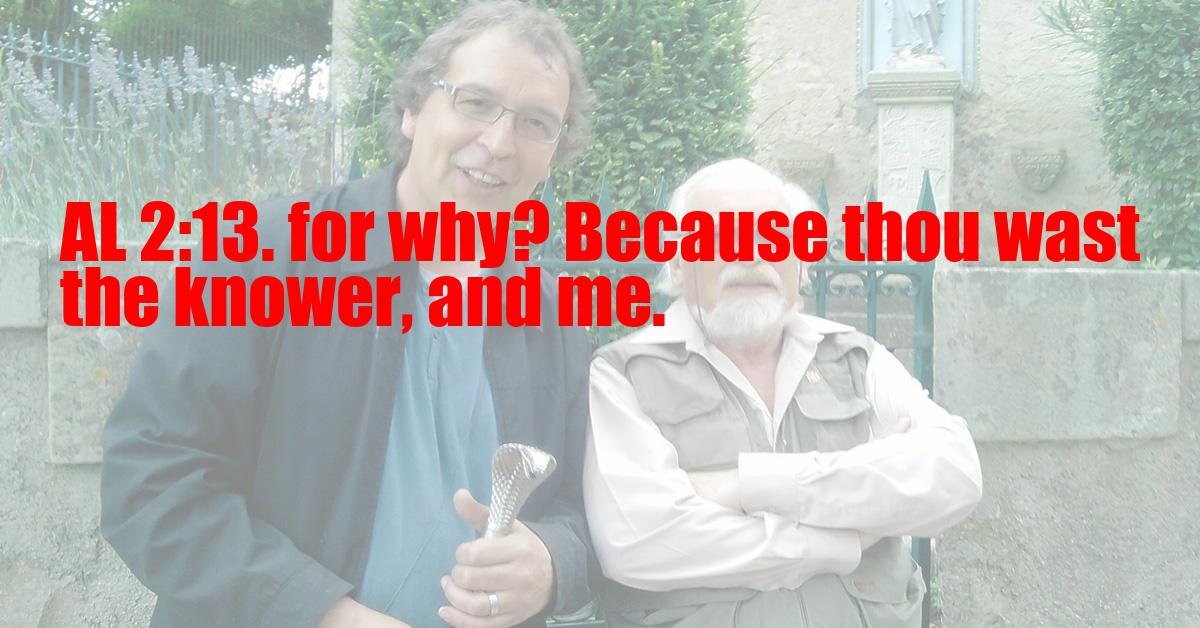 for why? Because thou wast the knower, and me.

The Djeridensis Comment
Aiwass then spake a Riddle, by quaint grammar and trick of style and form proving to me in after Years when I attained to be a Master of the Temple, that my True Will was one with His, and my fierce and bitter revolt the folly and falsehood of my conscious Will, enthralled by fear and shame and the sense of sin.

The Old Comment
For so long as any knower remains, there is no thing known. Knowledge is the loss of the Knower in the Known. "And me" (not "and I"), Hadit was the passive, which could not arise because of the existence of the Knower; "and" implying further the duality — which is Ignorance.

Hadit had to overcome the silly 'knower,' who thought everything was Sorrow. Cf. "Who am I?" — "Thou knowest" in Chapter I.
I am far from satisfied with either of the above interpretations of this verse. We shall see a little later, verses 27 ~sqq, a general objection to "Because" and "why." Then how is it that Hadit does not disdain to use those terms? It must be for the sake of my mind. Then, "for why" is detestably vulgar; and no straining of grammar excuses or explains the "me."
We have two alternatives. The verse may be an insult to me. My memory tells me, however, that the tone of the voice of Aiwaz was at this point low, even, and musical. It sounded like a confidential, almost deferential, clarification of the previous verse, which had rung out with joyful crescendo.
The alternative is that the verse contains some Qabalistic proof of the authority of Aiwaz to lay down the law in so autocratic a manner. Just so, one might add weight to one's quotation from Sappho, in the English, by following it up with the original Greek.
The absence of all capital letters favours this theory. Such explanation, if discovered, will be given in the Appendix. {WEH NOTE: Appendix not extant}
However, simply enough, the solution begins with the idea that the small initial of 'because' would be explained by a colon preceding it instead of a note of interrogation, which may have been due to my haste, ignorance, and carelessness. Then 'for why' may be understood: "for the benefit of this Mr. Why – to satisfy your childish clamour for a reason – I will now repeat my remarks in an alternative form such that even your stupidity can scarcely fail to observe that I have sealed my psychological explanation in cipher." We find accordingly that the arising "of Me in Thee" constitutes a state wherein "thou knewest not." By "knewest" we may understand the function of Hadit, intellectually and conjugally united with Nuit. (See Book 4, Part III, for GN, the root meaning both 'to know' and 'to beget'). And 'not' is Nuit , as in Cap. I. Now this idea explains that the arising 'of Me (Hadit) in Thee (The Beast)' is the fulfilment of the Magical Formula of Hadit and Nuit. And to know Nuit is the very definition of 'joy.' The next verse confirms this: "thou (the Beast) wast the knower (Hadit) and (united with) me (Nuit, as in Cap.I., verse 51 & others)." Finally, Nuit is indicated by two different symbols 'not' (Gk ΟΥ) and 'me' (Gk ΜΗ). Now ΟΥ ΜΗ was my Motto in the Grade of Adeptus Exemptus; Aiwaz thus subtly reminds me that I was pledged to deny the assertions of my intellectual and moral consciousness.

He combines in these few words (a) a correct psychological explanation of the situation (he does), (b) a correct magical explanation of that explanation , (c) a personal rebuke to which I had no possible reply, involving a knowledge of my own mental state which was superior to my own.
These two verses are sufficient in themselves to demonstrate the praeter-human qualities of the Author of this Book.