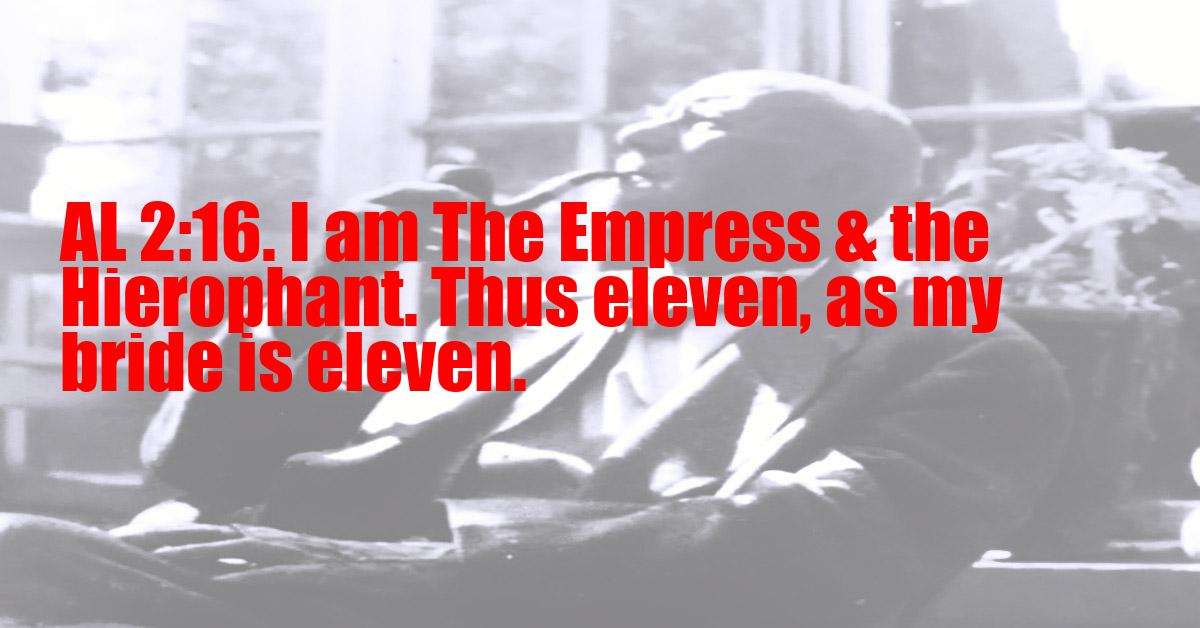 Bethsheba Comment:
Everyone knows the mundane order of the hebrew alephbet, but few know of its Priestly order even though the biblical book of Genesis is set out according to this order. Due to the fact that every Major Arcana card of the tarot has a hebrew letter, they may be ordered according to this Priestly arrangement as follows;
0 The Magus, I The Fool, II The Priestess, III The Aeon, IV The Empress, V The Universe, VI The Star, VII The Hierophant, VIII The Lovers, IX The Chariot, X Lust, XI The Hermit, XII The Wheel, XIII Adjustment, XIV The Hanged Man, XV Death, XVI ART, XVII The Devil, XVIII The Tower, XIX The Emperor, XX The Moon, XXI The Sun.
Thus; IV The Empress + VII The Hierophant = XI and the riddle is explained.
Crowley's comment about the 8 concords with the gematria of; Empress + Hierophant = 880.

I am The Empress & the Hierophant. Thus eleven, as my bride is eleven.

The Djeridensis Comment
(15-16.) Also, to distract and amuse my mind, to make me curious enough to be willing to proceed, He proposed a Riddle of the Nature of Hadit, so that I might know most surely beyond doubt that He was skilled in Knowledge of all secret marvels of letter and number in sacred tongues and scripts, lest I persuade myself that I myself had written this Book of my own motion. Therefore He shewed me Wisdom and Cunning beyond my wit to conceive, and marvels never yet known to any man that was of woman born. This Riddle, with its fellows, will I expound elsewhere, so that all men may know of a surety that not I, nor any man, but a Great Angel in very sooth, spake in mine ear the Words of His Book.