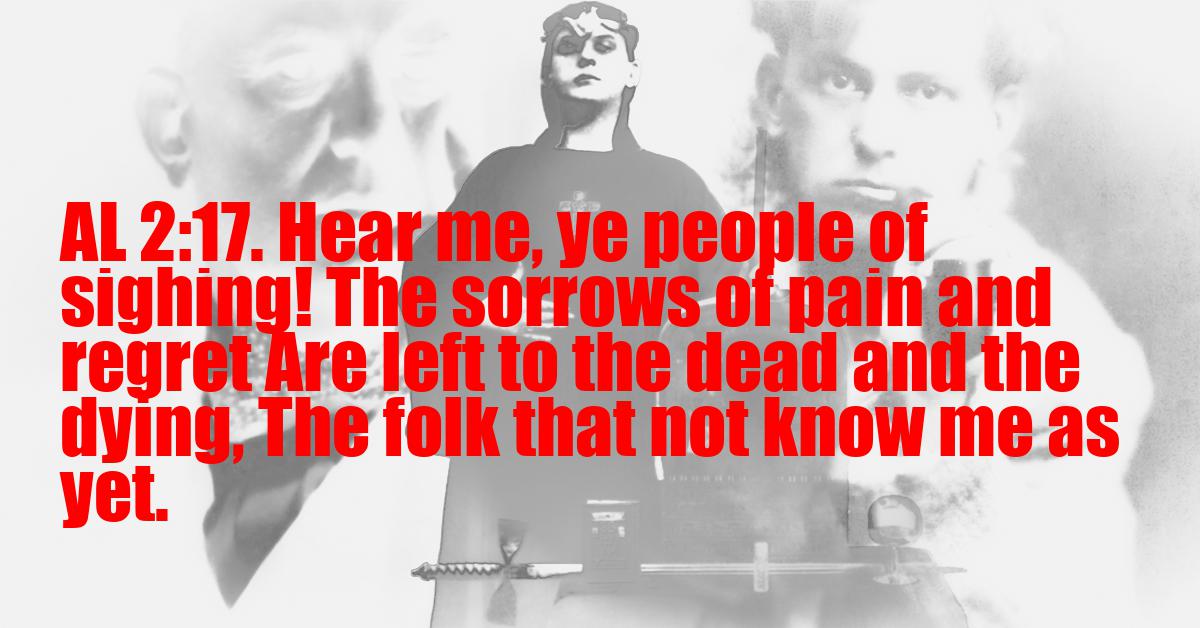 Hear me, ye people of sighing!
The sorrows of pain and regret
Are left to the dead and the dying ,
The folk that not know me as yet.

The Djeridensis Comment
The Riddle proposed, Aiwass begins to utter the doctrine as He had warned me. Still further to abate my fear and loathing, He craftily opened His discourse with a verse so weak and stupid, that I, being a great poet, should abate my wrath and smile with serene contempt upon the Angel’s feeble efforts to use rhythm and rhyme. The trick served its purpose: I went on writing, cheerful and easy in my mind, thinking that now I had a weapon to defend myself against Aiwass, and that the more he spoke the surer I should be to reject His Word, even as all writings alleged to come from sources other than human, which I had always found beneath contempt both as to essence and form. :From the wretched rime Aiwass works cunningly up through off-hand sneering statements of His doctrine to austere and sublime phrases; alive with passion and power, superb in style, sternly succinct, and flaming with dread force. Quick, eager, righteous, not to be beaten off, He smote me, stroke on stroke, and spared not. :This which now follows is the essence of His doctrine. That "existence is pure joy" is His first direct challenge to the whole body of the best and deepest thought of the best and wisest men of this Earth, from the dawn of man’s Records even unto this hour of His speaking. It cuts clean across the whole trend of men’s minds with sheer sweep of steel; no truce, nor quarter. :Now the Second Challenge: a Bugle Call shriller and clearer than the First. Sorrow, pain, regret, are symptoms of diseased thought; those only who have ceased to be able to adjust themselves rightly and gladly to all Change, and to grow thereby, or those who still react, but only feebly and vainly, take Sorrow, pain, and regret to be Real. Those (also) who do not yet know Hadit (that is, know their True Selves to be Hadit) are likewise deceived.

The Old Comment
(17-21.) This passage was again very painful to the prophet, who took it in its literal sense.
But "the poor and the outcast" are the petty thoughts and the qliphothic thoughts and the sad thoughts. These must be rooted out, or the ecstasy of Hadit is not in us. They are the weeds in the Garden that starve the Flower.

The dead and the dying, who know not Hadit, are in the Illusion of Sorrow. Not being Hadit, they are shadows, puppets, and what happens to them does not matter. If you insist upon identifying yourself with Hecuba, your tears are natural enough.
There is no contradiction here, by the way, with verses 4 and 5. The words 'know me' are used loosely as is natural in a stanza; or, more likely, are used (as in the English Bible) to suggest the root GN, identity in transcendental ecstasy. Possibly 'not' and 'me' are once more intended to apply to Nuit. With 'know' itself, they may be "Nothing under its three forms" of negativity, action, and individuality.