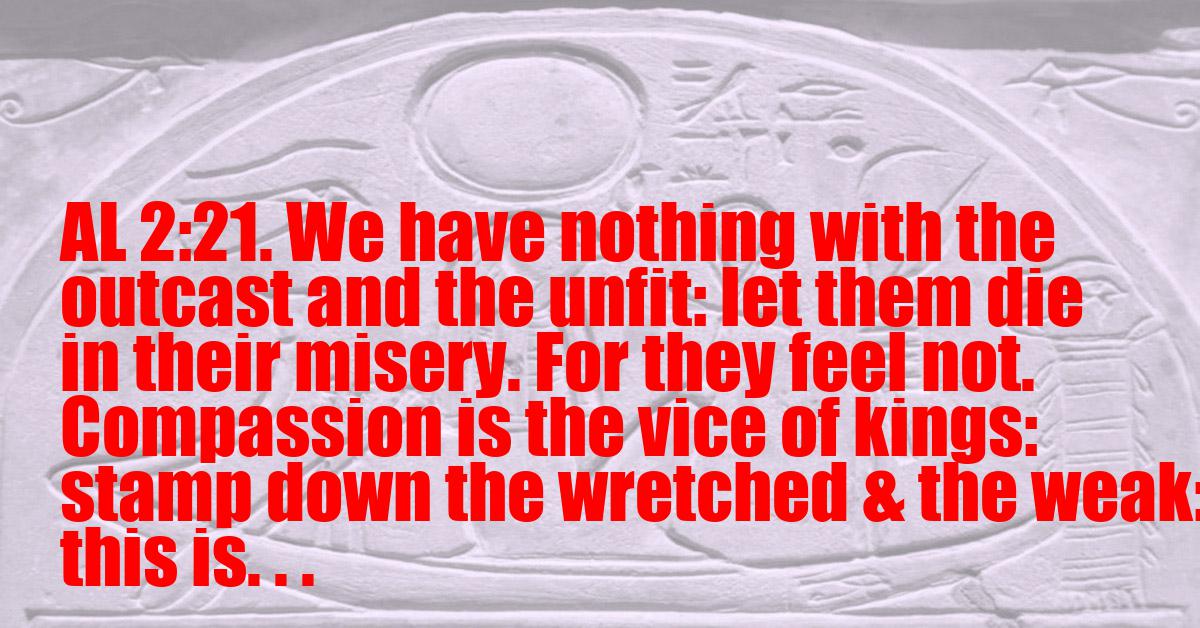 We have nothing with the outcast and the unfit: let them die in their misery. For they feel not. Compassion is the vice of kings: stamp down the wretched & the weak: this is the law of the strong: this is our law and the joy of the world. Think not, o king, upon that lie: That Thou Must Die: verily thou shalt not die, but live. Now let it be understood: If the body of the King dissolve, he shall remain in pure ecstasy for ever. Nuit! Hadit! Ra-Hoor-Khuit! The Sun, Strength & Sight, Light; these are for the servants of the Star & the Snake.

The Djeridensis Comment
The outcast: these are passive; they do not seek and conquer all that may be but are the sport of Events not of their own making, which hustle against them and thrust them from the path. The unfit: these fail to adjust themselves to what is about them; they cannot love under will : They had better "die in their misery"; that is, cease once and for all to react so feebly and wrongly as they do: for such a Point-of-View as they shew forth is not to be endured. It is not truly Hadit at all; not any one Point, but a shifting fulcrum: let it be no more counted among True Things. Again Aiwass repeats that "they feel not." : Compassion, the noblest virtue of the Buddhist, is damned outright by Aiwass. To "suffer with" some other being is clearly to cease to be oneself, to wander from one’s Way. It always implies error, no Point-of-View being the same as any other: and in Kings — leaders and rulers of men — such error is a vice. For it leads straight to the most foolish Rule ever laid down, "Do unto others as you would that they should do unto you." True men know their own needs and find ways to supply them. To judge the sick by the healthy is pregnant with error. The wretched and the weak are simply not real beings; they cannot be helped or mended. They must be expunged as falsehoods likely to infect the truth. This is the law of Nature, and it is the Law of the Lords of the Aeon. Put into force it will fill the world with joy. The root of all such error is the belief of Kings that they are mortal. This is confuse their essence with that basis of a certain class of events which refers to the kind of life which includes death. Aiwass insists that if the body dissolve its King remains in timeless rapture. For his events have ceased; and he stands in a single state of joy as made one with Nuit. Should he wish further knowledge of himself, he must choose some other means by which to measure it, by which to set in motion a fresh series of events.
So intense was the joy of the Angel in proclaiming this good news that he broke off into a cry of rapture calling upon the Lords of the three chapters of this book. He then went on, and exclaimed that the sun, source of all light and life on earth, strength to do and sight to perceive, as also light, the simplest form of play between twin forces, are the guerdon of those who know themselves as they are. He calls Hadit the Star and the Snake. The star has been explained above. By the snake is meant the essence of what is kingly in constant vibrant motion, yet also able to perfect itself in the form of a ring. It is a symbol of wisdom, the power to slay and also to shed its skin and renew its pristine beauty in its season. It is also the healer and the goer.

The Old Comment
(17-21.) This passage was again very painful to the prophet, who took it in its literal sense.
But "the poor and the outcast" are the petty thoughts and the qliphothic thoughts and the sad thoughts. These must be rooted out, or the ecstasy of Hadit is not in us. They are the weeds in the Garden that starve the Flower.