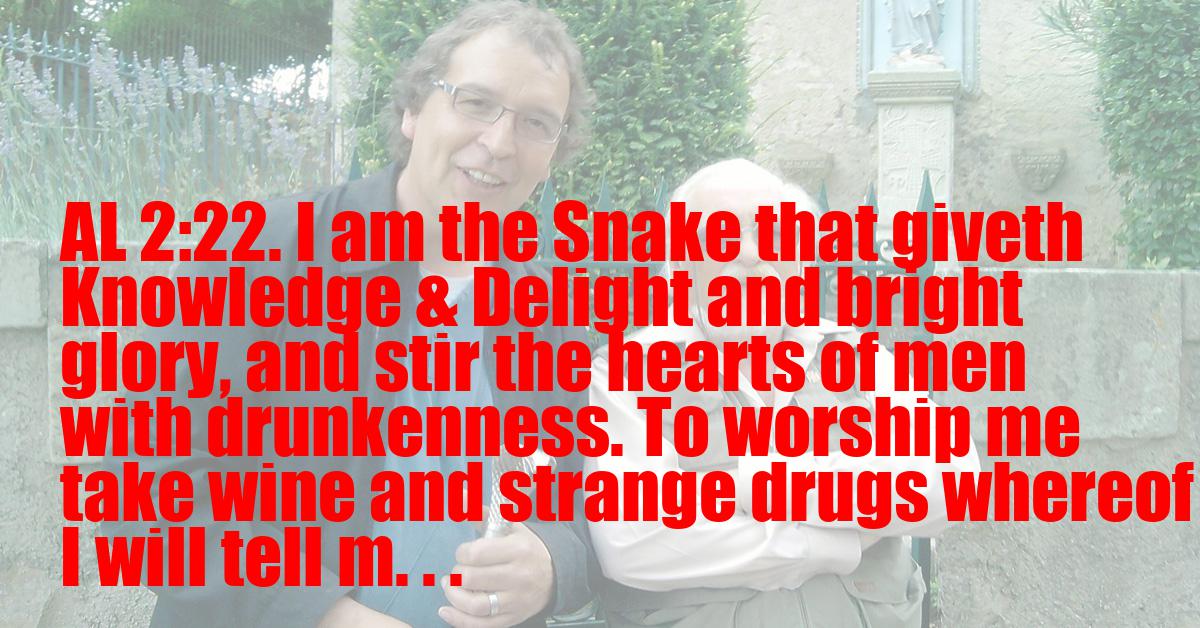 I am the Snake that giveth Knowledge & Delight and bright glory, and stir the hearts of men with drunkenness. To worship me take wine and strange drugs whereof I will tell my prophet, & be drunk thereof! They shall not harm ye at all. It is a lie, this folly against self. The exposure of innocence is a lie. Be strong, o man! lust, enjoy all things of sense and rapture: fear not that any God shall deny thee for this.

The Djeridensis Comment
Hadit is now described as the snake whose virtue is to give knowledge, for all knowledge consists in the art to perceive events as each new marriage with a new part of Nuit takes place. He gives delight which is a function of such knowledge. He also gives bright glory, that is, he causes men to send forth rays of light. Man is in fact, as it were, a prism. In his dual machine the formless light is split into many colours which mingle in this way and that as the nature of each event requires. Hadit is the flame in every heart of man, and when he stirs that heart is shaken. We call this being inspired, or, in its most sacred sense, being drunken. Aiwass now flings his third great challenge at the world. He denies flatly the truth of all the teaching of the past. He tells us that to worship Hadit, that is, to cause him to stir, we should make ourselves drunk by the use of wine and certain strange drugs. So much is common knowledge. But he adds the startling statement "They shall not harm ye at all." One can but gasp; to argue in support of his statement would be beyond the power of any man. The proof must lie with time. Lest there be folly, let me say that this passage does not license reckless debauch. The use of drugs and drink is to be strictly an act of Magick. Compare what is said in the First Chapter with regard to the use of the functions of sex.
Headlong, after one challenge, Aiwass hurls forth the next. He does not even break up his phrases by the use of paragraphs. He takes it all in his stride. What is to us a huge and dreadful doctrine is to him the simple well-known truth. He tells us now that "this folly against self" "is a lie". By this he means that we must not be ashamed of our own point of view, of pretend that we ought to respect and be tender towards some other. Every true point is well able to take care of itself; if only let alone as it ought to be. Every time we try to put ourselves in the place of some other person we give up truth for fancy. We do not, and we never can, see the world except with our own eyes. The world of one’s neighbour is not even the same world as one’s own — even if we could assume his point of view. It is a deadly mischief to practise this form of falsehood; and to acclaim it as a virtue in the Christian fashion, both a crime and a blunder. Another lie is the "exposure of innocence." Most people pretend earnestly to be harmless. This not only blasphemes the God-head of the self but attempts to create falsehood. Deceit is always danger. The kindest, as the noblest, course is to nail one’s colours to the mast, so that others can shelter beneath them or avoid the conflict, as their judgement counsels them. The social and moral code of shallow sham is the tactics of the pirate.
A further challenge now rings out. Aiwass insists that we shall use all our functions as fully as we can. We are to enjoy all things, to make them serve our Will and thrill us with rapture. We must dismiss that bogey of those who wish to treat mankind as children without spirit or wit, to frighten us into slavish service to codes of conduct which suit their own servile nature, allay their fears, or procure easy preys for their greed by the threat of some God who will make trouble for those who dare to be themselves and do their own True Wills.

The Old Comment
Hadit now identifies himself with the Kundalini, the central magical force in man.
This privilege of using wine and strange drugs has been confirmed; the drugs were indeed revealed. (P.S. And they have not harmed those who have used them in this Law.)
Follows a curse against the cringing altruism of Christianity, the yielding of the self to external impressions, the smothering of the Babe of Bliss beneath the flabby old nurse Convention.

The New Comment
Drunkeness is a curse and a hindrance only to slaves. Shelley's couriers were 'drunk on the wind of their own speed.' Any one who is doing his true Will is drunk with the delight of Life.
Wine and strange drugs do not harm people who are doing their will; they only poison people who are cancerous with Original Sin. In Latin countries where Sin is not taken seriously, and sex-expression is simple, wholesome, and free, drunkenness is a rare accident. It is only in Puritan countries, where self-analysis, under the whip of a coarse bully like Billy Sunday, brings the hearer to 'conviction of sin,' that he hits first the 'trail' and then the 'booze.' Can you imagine an evangelist in Taormina? It is to laugh.
This is why missionaries, in all these centuries, have produced no conversions whatever, save among the lowest types of negro, who resemble the Anglo-Saxon in this possession of the 'fear-of-God' and 'Sin' psychopathies.
Truth is so terrible to these detestable mockeries of humanity that the thought of self is a realization of hell. Therefore they fly to drink and drugs as to an anaesthetic in the surgical operation of introspection.
The craving for these things is caused by the internal misery which their use reveals to the slave-souls. If you are really free, you can take cocaine as simply as salt-water taffy. There is no better rough test of a soul than its attitude to drugs. If a man is simple, fearless, eager, he is all right; he will not become a slave. If he is afraid, he is already a slave. Let the whole world take opium, hashish, and the rest; those who are liable to abuse them were better dead.
For it is in the power of all so-called intoxicating drugs to reveal a man to himself. If this revelation declare a Star, then it shines brighter ever after. If it declare a Christian – a thing not man nor beast, but a muddle of mind – he craves the drug, no more for its analytical but for its numbing effect. Lytton has a great story of this in 'Zanoni.' Glyndon, an uninitiate, takes an Elixir, and beholds not Adonai the glorious, but the Dweller on the Threshold; cast out from the Sanctuary, he becomes a vulgar drunkard.
"This folly against self;" altruism is a direct assertion of duality, which is division, restriction, sin, in its vilest form. I love my neighbour because love makes him part of me; not because hate divides him from me. Our law is so simple that it constantly approximates to truism.
"The exposure of innocence." Exposure means "putting out" as in a shop-window. The pretence of altruism and so-called virtue "is a lie;" it is the hypocrisy of the Puritan, which is hideously corrupting both to the hypocrite and to his victim.
To "lust" is to grasp continually at fresh aspects of Nuit. It is the mistake of the vulgar to expect to find satisfaction in the objects of sense. Disillusion is inevitable; when it comes, it leads only too often to an error which is in reality more fatal than the former, the denial of 'materiality' and of 'animalism.' There is a correspondence between these two attitudes and those of the 'once-born' and 'twice-born' of William James (Varieties of Religious Experience). Thelemites are 'thrice-born;' we accept everything for what it is, without 'lust of result,' without insisting upon things conforming with a priori ideals, or regretting their failure to do so. We can therefore 'enjoy' all things of sense and rapture' according to their true nature. For example, the average man dreads tuberculosis. The "Christian Scientist" flees this fear by pretending that the disease is an illusion in "mortal mind." But the Thelemite accepts it for what it is, and finds interest in it for its own sake. For him it is a necessary part of the Universe; he makes "no difference" between it and any other thing. The artist's position is analogous. Rubens, for instance, takes a gross pleasure in female flesh, rendering it truthfully from lack of imagination and analysis. Idealist painters like Bourgereau awake to the divergence between Nature and their academic standards of Beauty, falsify the facts in order to delude themselves. The greatest, like Rembrandt, paint a gallant, a hag, and a carcass with equal passion and rapture; they love the truth as it is. They do not admit that anything can be ugly or evil; its existence justifies itself. This is because they know themselves to be part of an harmonious unity; to disdain any item of it would be to blaspheme the whole. The Thelemite is able to revel in any experience soever; in each he recognizes the tokens of ultimate Truth. It is surely obvious, even intellectually, that all phenomena are interdependent, and therefore involve each other. Suppose a + b + c = d, a = d - b - c just as much as b = d - c - a. It is senseless to pick out one equation as 'nice', and another as 'nasty'. Personal predilections are evidence of imperfect vision. (All this is philosophical, of course. Your imperfect vision, in practice, justifies your personal predilections. Or, in other words, Do what thou wilt!) But it is even worse to deny reality to such facts as refuse to humour them. In the charter of spiritual sovereignty it is written that the charcoal-burner is no less a subject than the duke. The structure of the state includes all elements; it were stupid and suicidal to aim at homogeneity, or to assert it. Spiritual experience soon enables the aspirant to assimilate these ideas, and he can enjoy life to the full, finding his True Self alike in the contemplation of every element of existence.