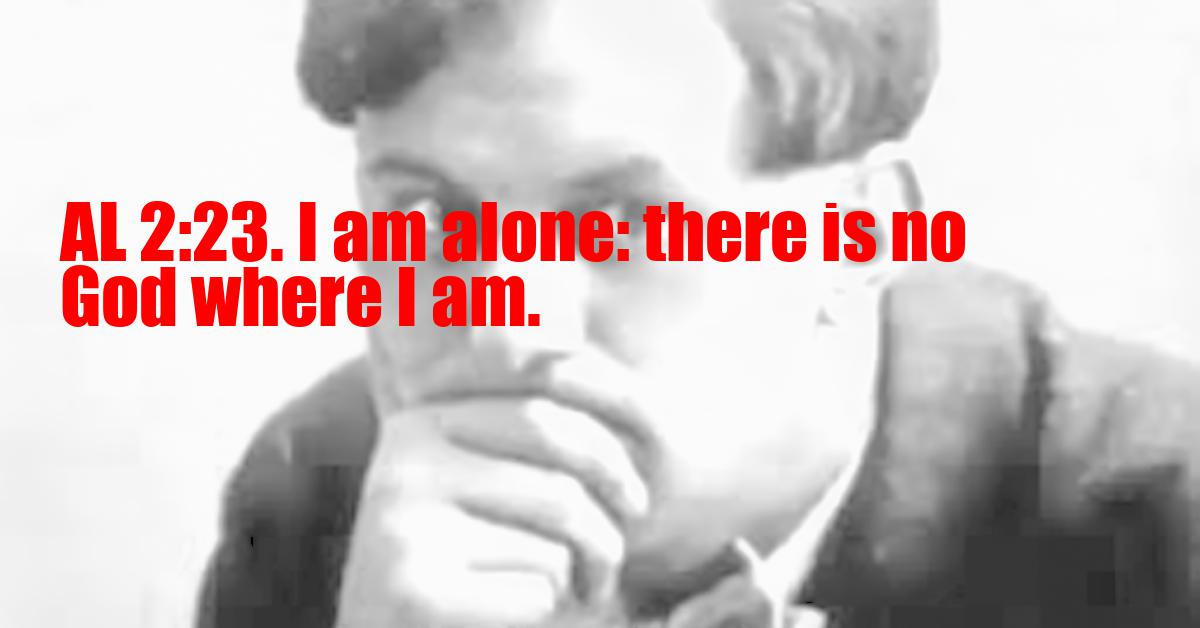 I am alone: there is no God where I am.

The Djeridensis Comment
Aiwass now takes the trumpet from his lips and returns for a moment to the nature of Hadit. It seems that the word God brought back into his mind one point not yet set forth. Hadit is said to be alone; there is no God where he is. This of course follows from the nature of Hadit as explained above. He is himself the centre of the Cosmos. There cannot be any other being to whom he should bow.

The Old Comment
The Atheism of God.
"Allah's the Atheist! he owns No Allah." Bagh-i-Muattar.
To admit God is to look up to God, and so not to be God. The curse of duality.

The New Comment
This refers to the spiritual experience of Identity. When one realizes one's Truth there is no room for any other conception.
It also means that the God-idea must go with other relics of the Fear born of Ignorance into the limbo of savagery. I speak of the Idea of God as generally understood, God being 'something "not ourselves" that makes for righteousness,' as Matthew Arnold victorianatically phrased his definition. The whiskered wowser! Why this ingrained conviction that self is unrighteous? It is the heritage of the whip, the brand of the born slave. Incidentally, we cannot allow people who believe in this 'God;' they are troglodytes, as dangerous to society as any other thieves and murderers. The Christians to the Lions!
Yet, in the reign of Good Queen Victoria, Matthew Arnold was considered rather hot stuff as an infidel! Tempora mutantur, p.d.q. when a Magus gets on the job.
The quintessence of this verse is (however) its revelation of the nature of Hadit as a self-conscious and individual Being, although impersonal. He is an ultimate independent, and unique element in Nature, impenetrably aloof. The negative electron seems to be his physical analogue. Each such electron is indistinguishable from any other; yet each is determined diversely by its relations with various positive complementary electrons.
The verse is introduced at this juncture in order to throw light on the passage which follows. It is important to understand Hadit as the 'core of every star' when we come to consider the character of those stars, his 'friends' or sympathetic ideas grouped about him, who are 'hermits,' individualities eternally isolated in reality though they may appear to be lost in their relations with external things.