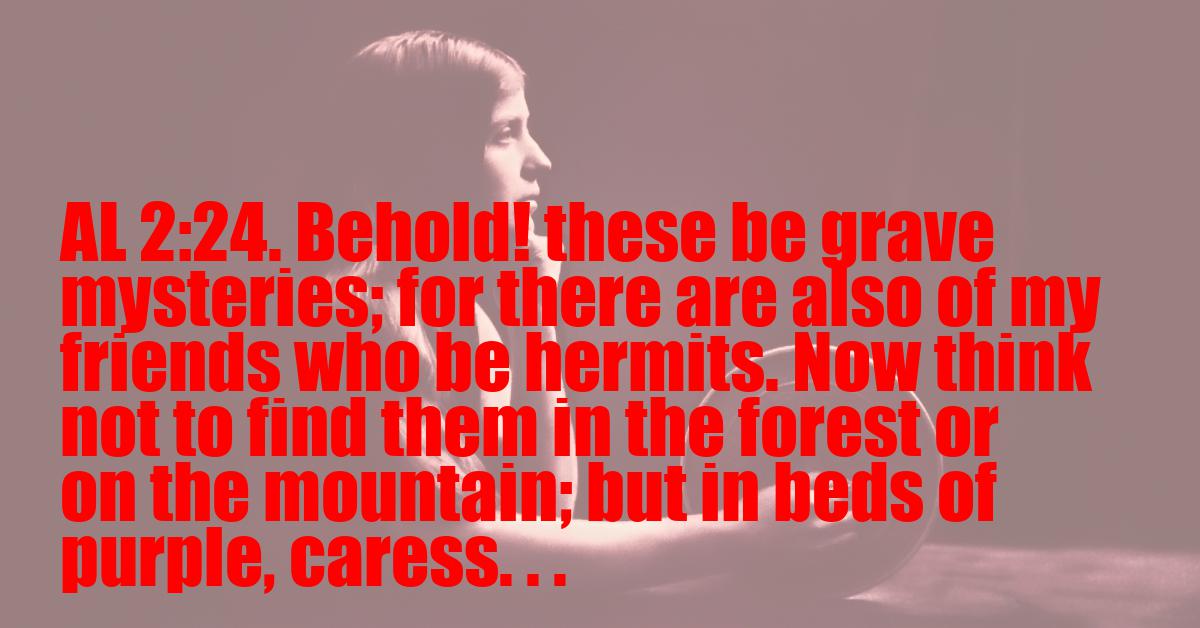 Behold! these be grave mysteries; for there are also of my friends who be hermits. Now think not to find them in the forest or on the mountain; but in beds of purple, caressed by magnificent beasts of women with large limbs, and fire and light in their eyes, and masses of flaming hair about them; there shall ye find them. Ye shall see them at rule, at victorious armies, at all the joy; and there shall be in them a joy a million times greater than this. Beware lest any force another, King against King! Love one another with burning hearts; on the low men trample in the fierce lust of your pride, in the day of your wrath.

The Djeridensis Comment
Aiwass returns to the charge. He describes the hermits of Thelema. We must define a Hermit as one who goes alone. Observe the word "alone" with regard to Hadit, just above. But these Hermits are to be found taking their pleasure with women and in all other ways, acting like the Masters of Rome in the days of the Empire and of the Renaissance. Great kings and queens of Thebes and Babylon. We are to learn from this to enjoy all things without losing control of ourselves or ceasing to suffice for ourselves or becoming the slaves of our desire or losing our sense of selfhood. Aiwass then warns us to respect the equal kingship of others. We are to love our brother kings with eager passion and combine to trample down the "low men", in the sense explained in the second challenge.

The New Comment
The Christians to the Lions!
A hermit is one who dwells isolated in the desert, exactly as a soul, a star, or an electron in the wilderness of space-time. The doctrine here put forth is that the initiate cannot be polluted by any particular environment. He accepts and enjoys everything that is proper to his nature. Thus, a man's sexual character is one form of his self-expression; he unites Hadit with Nuit sacramentally when he satisfied his instinct of physical love. Of course, this is only one partial projection; to govern, to fight, and so on, must fulfil other needs. We must not imagine that any form of activity is ipso facto incapable of supplying the elements of an Eucharist: suum cuique. Observe, however, the constant factor in this enumeration of the practices proper to 'hermits:' it is ecstatic delight. Let us borrow an analogy from Chemistry. Oxygen has two hands (so to speak) to offer to other elements. But contrast the cordial clasp of hydrogen or phosphorus with the weak reluctant greeting of chlorine! Yet hydrogen and chlorine rush passionately to embrace each other in monogamic madness! There is no 'good' or 'bad' in the matter; it is the enthusiastic energy of union, as betokened by the disengagement of heat, light, electricity, or music, and the stability of the resulting compound, that sanctifies the act. Note also that the utmost external joy in any phenomenon is surpassed a millionfold by the internal joy of the realization that self-fulfilment in the sensible world is but a symbol of the universal sublimity of the formula "love under will."
The last two sentences demand careful attention. There is an apparent contradiction with verses 59, 60. We must seek reconcilement in this way: Do not imagine that any King can die (v.21) or be hurt (v.59); strife between two Kings can therefore be nothing more than a friendly trial of strength. We are all inevitably allies, even identical in our variety; to "love one another with burning hearts" is one of our essential qualities.
But who then are the "low men," since "Every man and every woman is a star?" The casus belli is this: there are people who are veiled from themselves so deeply that they resent the bared faces of us others. We are fighting to free them, to make them masters like ourselves. Note verse 60, "to hell with them:" that is, let us drive them to the 'hell' or secret sanctuary within their consciousness. There dwells "the worm that dieth not and the fire that is not quenched;' that is, 'the secret serpent coiled about to spring' and 'the flame that burns in every heart of man' – Hadit. In other words, we take up arms against falsehood; we cannot help it if that falsehood forces the King it has imprisoned to assent to its edicts, even to believe that his interests are those of his oppressor, and to fear Truth as once Jehovah did the Serpent.