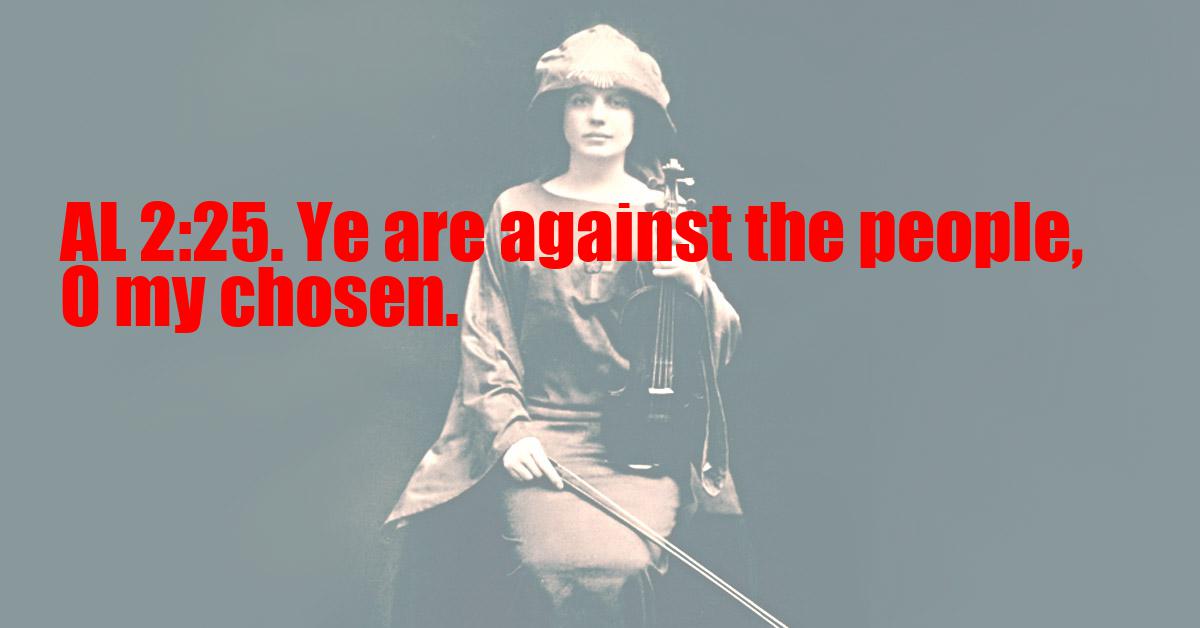 Ye are against the people, O my chosen!

The Djeridensis Comment
Aiwass repeats this thought in even simpler, stronger, clearer words. We are against "the people". Any unit, any true star, is kingly but the people as a multitude — even though each unit be noble — are not themselves, they are a confused mass of chance atoms. They must not be allowed to act as if they possessed a point of view. They are not stars, they have no way of their own. They are dragged helpless in the wake of any force that happens to attract them. To permit them to control events at all is to give up all design, all Will, all clear sight.

The Old Comment
The cant of democracy condemned. It is useless to pretend that men are equal; the facts are against it. And we are not going to stay, dull and contented as oxen, in the ruck of humanity.

The New Comment
By 'the people' is meant that canting, whining, servile breed of whipped dogs which refuses to admit its deity. The mob is always afraid for its bread and butter – when its tyrants let it have any butter – and now and then the bread has 60% substitutes of cattle-fodder. (Beast-food, even the New York Times of November 13, 1918, E.V. has it.) So, being afraid, it dare not strike. And when the trouble begins, we aristocrats of Freedom, from the castle or the cottage, the tower or the tenement, shall have the slave mob against us. The newspapers will point out to us that "the People" prefer to starve, and thank John D. Rockefeller for the permission to do so.
Still deeper, there is a meaning in this verse applicable to the process of personal initiation. By "the people" we may understand the many-headed and mutable mob which swarms in the slums of our own minds. Most men are almost entirely at the mercy of a mass of loud and violent emotions, without discipline or even organization. They sway with the mood of the moment. They lack purpose, foresight, and intelligence. They are moved by ignorant and irrational instincts, many of which affront the law of self-preservation itself, with suicidal stupidity. The moral Idea which we call "the people" is the natural enemy of good government. He who is 'chosen' by Hadit to Kingship must consequently be 'against the people' if he is to pursue any consistent policy. The massed maggots of 'love' devoured Mark Antony as they did Abelard. For this reason the first task of the Aspirant is to disarm all his thoughts, to make himself impregnably above the influence of any one of them; this he may accomplish by the methods given in Liber Aleph, Liber Jugorum, Thien Tao, and elsewhere. Secondly, he must impose absolute silence upon them, as may be done by the "Yoga" practices taught in Book 4 (Part I), Liber XVI, etc. He is then ready to analyse them, to organize them, to drill them, and so to take advantage of the properties peculiar to each one by employing its energies in the service of his imperial purpose.