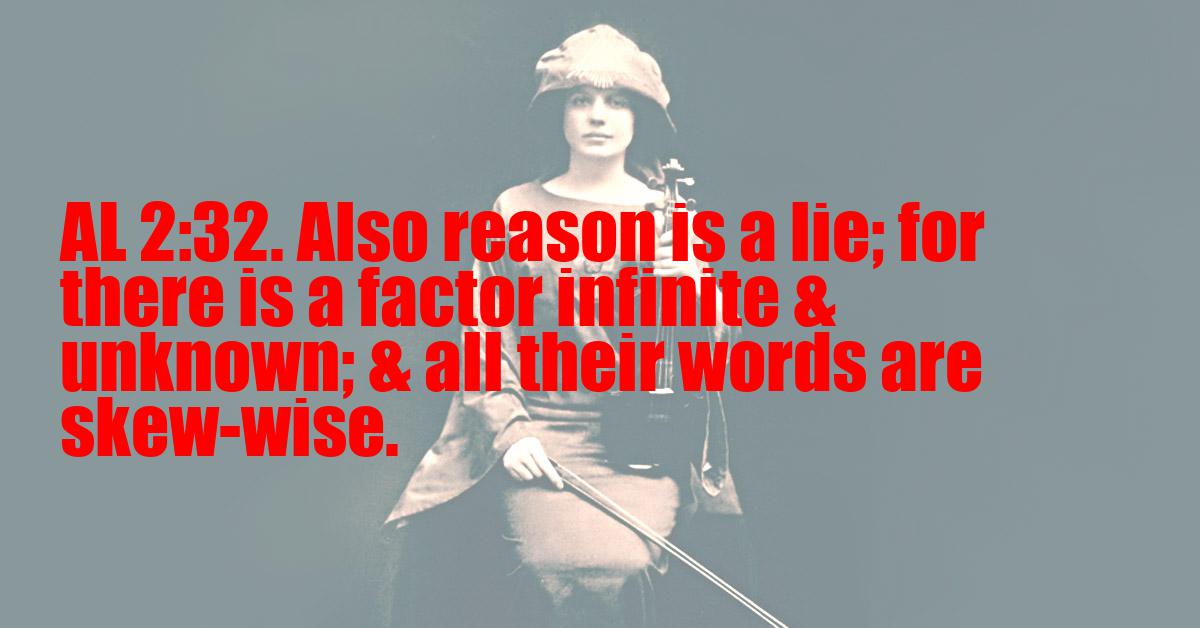 Also reason is a lie; for there is a factor infinite & unknown; & all their words are skew-wise.

The Djeridensis Comment
Aiwass now leaps to the supreme stroke. Reason itself is a lie. He explains that this must be the case in the nature of things. The Reason may be in perfect order and never make a mistake, that is, within the limits of its powers. But it can never be certain of being right unless its knowledge is complete, which of course can never happen. In fact, being bound by its own laws, it has no means of finding out whether in any one case there may not be some factor vital to the problem of whose very nature it has no knowledge at all. Its axioms themselves merely state its limits. It is as if a bishop on a chess board were to assert that it could never move except in an oblique straight line, which is only true in respect of the laws of the game, and takes no account of the laws of motion as such. Aiwass asserts that some such factor always lurks in every problem which may be put to reason. He calls it "a factor infinite and unknown" — unknown since no mind can ever contain the whole of the facts of nature which may apply. It must therefore be content to work within narrow limits and state its results under the reserve that they are only correct if we assume that its data suffices. The factor is also infinite in the same way as an atom in the world of solid bodies is greater than the greatest surface. More, the plane is not real at all to the solid; it is no more than a way which the real being has chosen to express one item of his knowledge of nature. The reason of man should never allow itself to forget that it is only real in the hardly likely case of the world ending with itself. It is wiser to keep in mind that all Events, however true and real they seem (and are, as measured by the laws of the game) are after all signs of a code which Hadit has designed in order to express his nature in terms of its acts of love under will with one or other part of Nuit.
The Angel concludes by saying that the statements of the reason are "skew-wise." The fact that the reason employs a set of symbols to work with distorts the whole work. It is as when a painter obtains the effect of solid form on a plane surface by adroit use of the laws of optics. No matter, therefore, how truly the reason works, and how well it brings back to the mind the events it describes, its thoughts are never the same as the things thought of. It follows from this that we should be fools to trust reason to guide us to answer Because.

The Old Comment
We have insufficient data on which to reason.
This passage only applies to "rational" criticism of the Things Beyond.

The New Comment
The 'factor infinite and unknown' is the subconscious Will. 'On with the revel!" 'Their words' – the plausible humbug of the newspapers and the churches. Forget it! Allons! Marchons!
length in a previous note that 'reason is a lie' by nature. We may here add certain confirmations suggested by the 'factor.' A and a (not-A) together make up the Universe. As a is evidently 'infinite and unknown,' its equal and opposite A must be so no less. Again, from any proposition S is P, reason deduces "S is not p;" thus the apparent finitude and knowability of S is deceptive, since it is in direct relation with p.
No matter what n may be, {?infinity?}, the number of the inductive numbers, is unaltered by adding or subtracting it. There are just as many odd numbers as there are numbers altogether. Our knowledge is confined to statements of the relations between certain sets of our own sensory impressions; and we are convinced by our limitations that 'a factor infinite and unknown' must be concealed within the sphere of which we see but one minute part of the surface. As to reason itself, what is more certain than that its laws are only the conscious expression of the limits imposed upon us by our animal nature, and that to attribute universal validity, or even significance, to them is a logical folly, the raving of our megalomania? Experiment proves nothing; it is surely obvious that we are obliged to correlate all observations with the physical and mental structure whose truth we are trying to test. Indeed, we can assume an 'unreasonable' axiom, and translate the whole of our knowledge into its terms, without fear of stumbling over any obstacle. Reason is no more than a set or rules developed by the race; it takes no account of anything beyond sensory impressions and their reactions to various parts of our being. There is no possible escape from the vicious circle that we can register only the behaviour of our own instrument. We conclude from the fact that it behaves at all, that there must be 'a factor infinite and unknown' at work upon it. This being the case, we may be sure that our apparatus is inherently incapable of discovering the truth about anything, even in part.
Let me illustrate. I see a drop of water. Distrusting my eyes, I put it under the microscope. Still in doubt, I photograph and enlarge the slide. I compare my results with those of others. I check them by cultivating the germs in the water, and injecting them into paupers. But I have learnt nothing at all about 'the infinite and unknown,' merely producing all sorts of different impressions according to the conditions in which one observes it!
More yet, all the instruments used have been tested and declared "true" on the evidence of those very eyes distrust of which drove me to the research.
Modern Science has at last grown out of the very-young-man cocksureness of the 19th century. It is now admitted that axioms themselves depend on definitions, and that Intuitive Certainty is simply one trait of "homo sapiens", like the ears of the ass or the slime of the slug. That we reason as we do merely proves that we cannot reason otherwise. We cannot move the upper jaw; it does not follow that the idea of motion is ridiculous. The limitation hints rather that there may be an infinite variety of structures which the jaw cannot imagine. The metric system is not the necessary mode of measurement. It is the mark of a mind untrained to take its own processes as valid for all men, and its own judgments for absolute truth. Our two eyes see an object in two aspects, and present to our consciousness a third which agrees with neither, is indeed, strictly speaking, not sensible to sight, but to touch! Our senses declare some things at rest and others in motion; our reason corrects the error, firstly by denying that anything can exist unless it is in motion, secondly by denying that absolute motion possesses any meaning at all.
At the time when this Book was written, official Science angrily scouted the 'factor infinite and unknown,' and clung with pathetic faith to the idea that reason was the touchstone of truth. In a single sentence, Aiwaz anticipates the discoveries by which the greatest minds now incarnate have made the last ten years memorable.