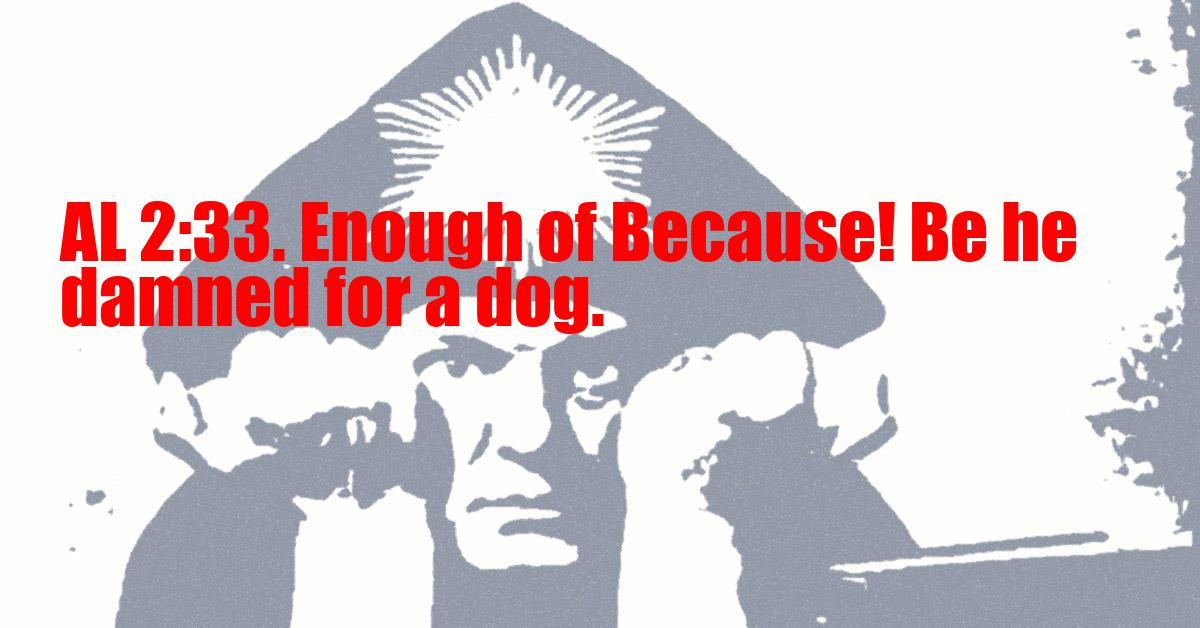 Enough of Because! Be he damned for a dog!

The Djeridensis Comment
The attack ends with the scornful curse "Enough of Because! Be he damned for a dog!" In this book, even the style of a letter is full of import. The word "dog" has occurred before this. Firstly, the dog is used as a symbol of a form which would restrict a God who indwelt it. Again "There is death for the dogs", that is, to restrict free action ends in stopping it once and for all. Further "the dogs of Reason." The thought of the mind born of and nourished by the senses tends to restrict the self, to impose the will of the world upon it, whereas the use of the world is to provide it with objects of love through which it can fulfil itself and know itself. To become passive towards the thoughts and the senses is to accept the fetters of a slave. Now then Because is called a dog, that is, a thought that tends to restrict and hamper the Will. The True Will is uncaused, being simply the measure of the motion of the self in respect of any given object. It is an abuse of the term ‘cause’ to apply it to this case. Men have said that the will is never free, because it is the effect of two causes conjoined between the nature of the Self and that of the moment. This is to put the cart before the horse. The symbol Dog is well chosen. It is God spelt backwards or denied. The nature of the dog is servile; dogs cannot depend on themselves, they never look at the world through their own eyes, they must needs accept some code imposed upon them from above. Further, the Magi of old took the Dog as a symbol of those base desires and fears which hunt and spring upon and pull down the soul of such men as know not how to master them.

The New Comment
This is the only way to deal with reason. Reason is like a woman; if you listen, you are lost; with a thick stick, you have some sort of sporting chance. Reason leads the philosopher to self-contradiction, the statesman to doctrinaire follies; it makes the warrior lay down his arms, and the lover cease to rave. What is so unreasonable as man? The only Because in the lover's litany is Because I love you. We want no skeleton syllogisms at our symposium of souls.
Philosophically, 'Because is absurd.' There is no answer to the question "Why." The greatest thinkers have been sceptics or agnostics: "omnia exeunt in mysterium"," and "summa scientia nihil scire" are old commonplaces. In my essays 'Truth' (in Konx Om Pax), 'The Soldier and the Hunchback,' 'Eleusis' and others, I have offered a detailed demonstration of the self-contradictory nature of Reason. The crux of the whole proof may be summarized by saying that any possible proposition must be equally true with its contradictory, as, if not, the universe would no longer be in equilibrium. It is no objection that to accept this is to destroy conventional Logic, for that is exactly what it is intended to do. I may also mention briefly one line of analysis.
I ask "What is (e.g.) a tree?" The dictionary defines this simple idea by means of many complex ideas; obviously one gets in deeper with every stroke one takes. The same applies to any "Why" that may be posed. The one existing mystery disappears as a consequence of innumerable antecedents, each equally mysterious.
To ask questions is thus evidently worse than a waste of time, so far as one is looking for an answer.
There is also the point that any proposition S is P merely includes P in the connotation of S, and is therefore not really a statement of relation between two things, but an amendment of the definition of one of them. "Some cats are black" only means that our idea of a cat involves the liability to appear black, and that blackness is consistent with those sets of impressions which we recognize as characteristic of cats. All ratiocination may be reduced to syllogistic form; hence, the sole effect of the process is to make each term more complex. Reason does not add to our knowledge; a filing system does not increase one's correspondence directly, though by arranging it one gets a better grasp of one's business. Thus coordination of our impressions should help us to control them; but to allow reason to rule us is as abject as to expect the exactitude of our ledgers to enable us to dispense with initiative on the one hand and actual transactions on the other.