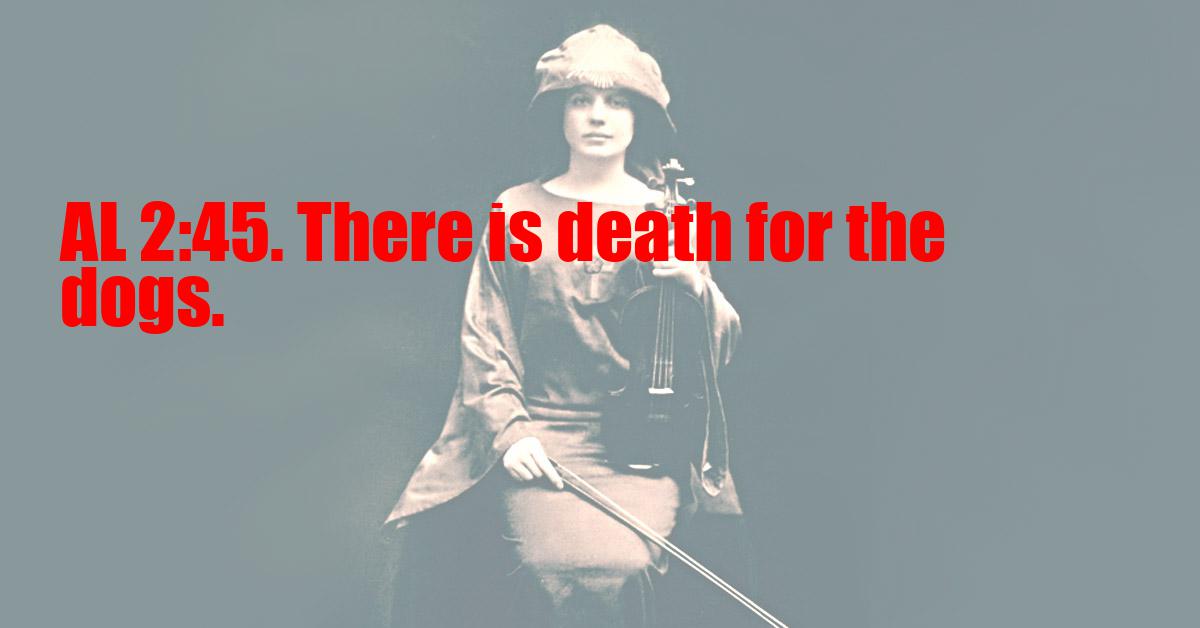 There is death for the dogs.

The Djeridensis Comment
We must not confuse such passing beyond earthly life with death; death is for the dogs. They restrict themselves more and more; fears, greeds, falsehoods gather like vultures to feast on their flesh; until at least they find no way to turn which is not barred by one or another of their sins, their self-made bars to free action. They can no longer cause any event beyond the narrow routine into which they have been forced by their failures, to grapple with Nature, to love, to woo, and to master the beauty of Nuit. Little by little the machine fails to carry on. Its prudence, more than aught else, has helped to destroy its power to meet fresh facts. The least surprises may upset it; and, sooner or later, it either meets some problem which breaks it up, or wears itself out and runs down. It is dead.

The Old Comment
Those without our circle of ecstasy do indeed die. Earth to earth, ashes to ashes, dust to dust.

The New Comment
The prigs, the prudes, the Christians, die in a real sense of the word; for although even they are 'Stars', there is not enough body to them (as it were) to carry on the individuality. There is no basis for the magical memory if one's incarnation holds nothing worth remembering. Count your years by your wounds "– forsitan haec clim meminisse juvabit."

In regard to this question of death I quote from Liber Aleph –
De Morte.
Thou hast made Question of me concerning Death, and this is mine Opinion, of which I say not: This is the Truth. First in the Temple called Man is the God, his Soul, or Star, individual and eternal, but also inherent in the Body of Our Lady Nuith. Now this Soul, as an Officer in the High Mass of the Cosmos, taketh on the vesture of his Office, that is, inhabiteth a Tabernacle of Illusion, a Body and Mind. And this Tabernacle is subject to the Law of Change, for it is complex, and diffuse, reacting to every Stimulus or Impression. If then the Mind be attached constantly to the Body, Death hath not Power to decompose it wholly, but a decaying Shell of the Dead Man, his Mind holding together for a little his Body of Light, haunteth the Earth, seeking a new Tabernacle (in its Error, that feareth Change) in some other Body. These Shells are broken away utterly from the Star that did enlighten them, and they are Vampires, obsessing that that adventure themselves into the Astral World, without Magical Protection, or invoke them, as do the Spiritists. For by Death is Man released only from the Gross Body, at the first, and is complete otherwise upon the Astral Plane, as he was in his Life. But this Wholeness suffereth Stress, and its Girders are loosened, the weaker first, and after that the stronger.
De Adeptis R.C. Eschatologia.
Consider now in this Light what shall come to the Adept, to him that hath aspired constantly and firmly to his Star, attuning his Mind unto the Musick of its Will. In him, if his Mind be knit perfectly together in itself, and conjoined with the Star, is so strong a Confection that it breaketh away easily not only from the Gross Body, but the Fine. It is this Fine Body which bindeth it to the Astral, as did the Gross to the Material World; so then it accomplisheth willingly the Sacrament of a Second Death, and leaveth the Body of Light. But the Mind, cleaving closely by Right of its Harmony, and Might of its Love, to its Star, resisteth the Ministers of Disruption, for a Season, according to its Strength.
Now, if this Star be of those that are bound by the Great Oath, incarnating without Remission because of Delight in the Cosmic Sacrament, it seeketh a new Vehicle in the Appointed Way, and indwelleth the Foetus of a Child, and quickeneth it. And if at this Time the Mind of its Former Tabernacle yet cling to it, then is there Continuity of Character, and it may be Memory, between the Two Vehicles. This is, briefly and without Elaboration, the Way of Asar in Amennti, according to mine Opinion, of which I say not: this is the Truth.
De Nuptiis summis.
Now then to this Doctrine, o my Son, add thou that which thou hast learned in the Book of the Law, that Death is the Dissolution in the Kiss of Our Lady Nuith. This is a true Consonance as of Bass with Treble; for here is the Impulse that setteth us to Magick, the Pain of the Conscious Mind. Having then Wit to find the Cause of this Pain in the Sense of Separation, and its Cessation by the Union of Love, it is the Summit of Our Holy Art to present the whole Engine in true and real appurtenance of our Force, without Leak, or Friction, or any other Waste or Hindrance to its Action. Thou knowest well how an Horse, or even a Machine propelled by a Man's Feet, becometh as it were an Extension of the Rider, through his Skill and Custom. Thus let thy Star have Profit of thy Vehicle, assimilating it, and sustaining it, so that it be healed of its Separation, and this even in Life, but most especially in Death. Also thou oughtest to increase thy Vehicle in Mass by true Growth in Balance, that thou be a Bridegroom comely and well-favoured, a man of Might, and a Warrior worthy of the Bed of so divine a Dissolution.