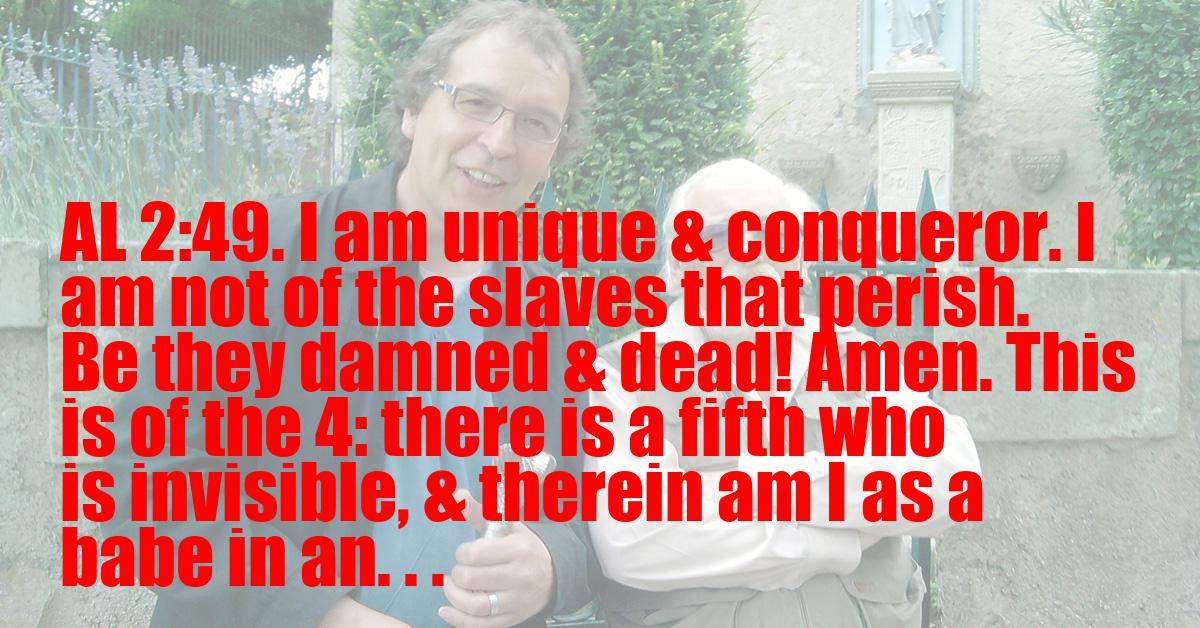 I am unique & conqueror. I am not of the slaves that perish. Be they damned & dead! Amen. (This is of the 4: there is a fifth who is invisible, & therein am I as a babe in an egg. )

The Djeridensis Comment
Hadit is "unique". Every point that exists is Hadit. Each one is without limit, and thus all are in the end alike in every respect. At the same time no two are in any way alike, if compared at any given point-moment. This is one of the statements of this book which involves a new view of nature — a view far beyond any yet set forth and one with the virtue to resolve every problem which the cosmos presents to our minds. I may explain the matter simply in this way. No two points on a line are the same. Their distance from all other points differs[34]. Each line, AB, AC, etc., is unique, even though AB=A'B', they differ in respect of C'. AC' cannot be equal to A'C'. Lines drawn in two ways from a point are equal only in length; each point in each differs only in respect of any other point. At the same time, the line being supposed endless, the sum of what can be said about all points is the same. No point can claim that it is an unique distance from some other point.
Hadit is "conqueror." It is his function to make himself master of all that may be and every event that he causes is a victory. He denies kinship with "slaves that perish." These are wholly foreign to his nature. Unless one is active, one is damned and dead: and this is the curse on all slaves, on all those who yield to what they meet, that they are condemned to suffer the constraint of their Wills. The world becomes a prison for the self instead of a playground; and in a little the prison gates become the seal of the tomb.
It must be born in mind that all such beings are not real in any proper sense of the word. They are not stars at all. So far as they think of themselves as "I" they may be said to possess a point-of-view, but unless this is strong enough to persist through all Events, it is not truly a self but a phantom of Self thrown on a screen by the light of the events about it. The slave souls are in fact details of our device for looking at nature. They help us observe how a given set of events affects this or that conscious mind. They save our time by telling us what they feel and think. We may learn from them how to guide our own course.
This great curse is sealed with a solemn Amen; but the use of the word reminds Aiwass that this book must prove over and over again the wisdom and cunning, the knowledge and power of its author as of a degree beyond any yet possessed by any man. He therefore propounds a riddle about the word Amen. He suggests a secret way of spelling it which, when found, will give new life and life of a higher order to the Soul of the word. I expound this riddle elsewhere.[35]

The New Comment
We are to conquer the Illusion, to drive it out. The slaves that perish are better dead. They will be reborn into a world where Freedom is the Air of Breath. So then, in all kindness, the Christians to the Lions!
The "Babe in the Egg" is Harpocrates; it is his regular Image.
I am not very well satisfied with the old comment on this verse. It appears rather as if the Amen should be the beginning of a new paragraph altogether. Amen is evidently a synthesis of the four elements, and the invisible fifth is Spirit. But Harpocrates, the Babe in the Egg, is Virgo in the Zodiac indeed, but Mercury among the planets. Mercury has the Winged Helmet and Heels, and the Winged Staff about which Snakes twine, and it is He that Goeth. Now this letter is Beth whose numeration is 2, and Aleph-Mem-Nun is 91, which added to 2 makes 93. Amoun is of course Jupiter in his highest Form. To understand this note fully one must have studied "The Paris Working"; also one must be an initiate of the O.T.O.