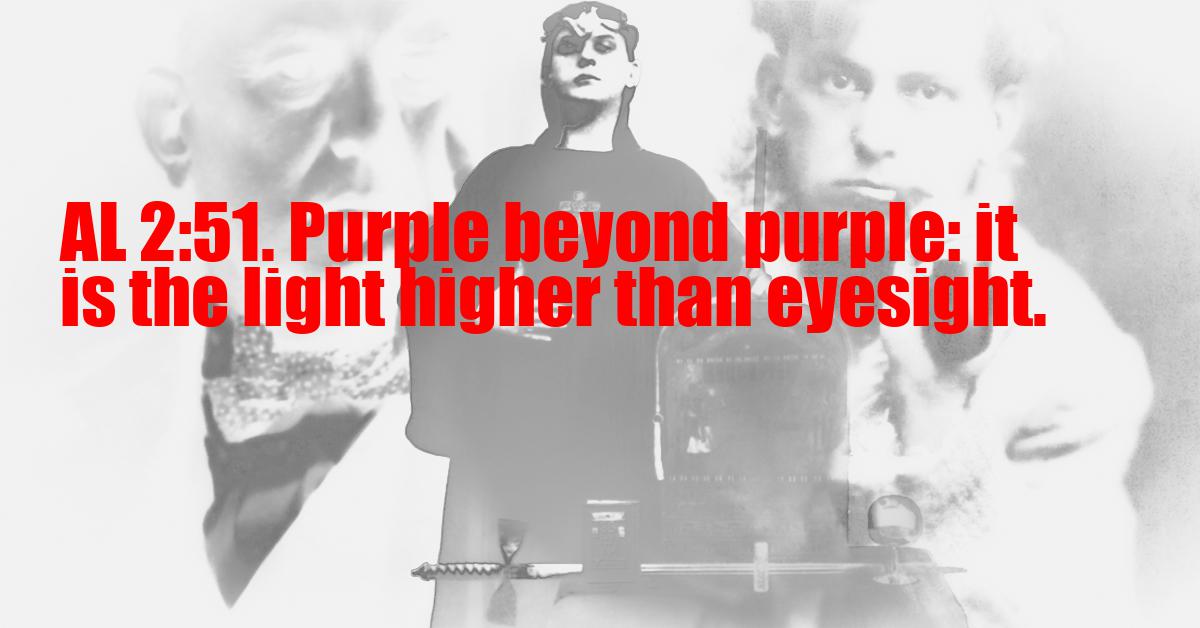 Purple beyond purple: it is the light higher than eyesight.

The Djeridensis Comment
(50-51.) We must note the strange way in which Aiwass swings forward and backward from startling doctrines of ethics and other mental and moral problems to attempt to declare the Nature of Hadit in divers symbols. He now leaves the question of "slaves" to tell us of the nature of the light proper to Hadit. He is "Blue ... and gold in the light of" Nuit; that is to say, the star-strewn sky which is her image reveals him. It is clear that he, having no form, save by virtue of her, cannot be known or seen. To seek him is merely to seek out one of the things that may be; that is, of course, as Nuit herself. His nature only appears by the "red gleam" in his eyes. His fiery light which desires to unite with her in all her forms may been seen in those organs by which he himself perceives. For so soon as we think of the eyes of Hadit, which express his Will and his wit, we ourselves begin to partake of our kinship with him, and we think at once of the fiery lust of the spirit to consume all things.
In the image of him as a snake, we thing of his outer form as "spangles". Wherever he comes into contact with anything to which he can react, there is a blaze of light and this light is purple and green. Aiwass explains that by purple is meant the light beyond the violet of the spectrum, and perhaps also that which is beyond the red. For the word is clearly meant to express the active extremes of that order of double motion which we call life, in which green is the centre of the portion which we are able to perceive. Green is the most passive of the colours. We connect it with the nature of Venus. It suggests love, peace, and the growth of plants and trees; whereas the light which we connect with Jupiter is violet and makes us think of the highest godhead reaching beyond our vision to pure motion of the spirit. Red is the colour of Mars — of the lowest form of energy, tending to heat rather than light, and reaching beyond light to some form of the action of spirit which seems to tend towards the death of energy itself. The purple of Hadit combines these extremes. He transforms the one to the other at will. In Him they are one.
This is the final secret of Physics. Guided by the Book of the Law, men of science will soon learn that the lowest depth is one with the highest height. Energy degrades till it reaches a point when it becomes once more the root of the highest form. I have shewn elsewhere the mode of this change. The main point is (in this place) to point out that the Book of the Law asserts that energy neither begins nor ends, but moves through a cycle of change. We chance to perceive only that arc of the curve in which every event is followed by seeming waste of the substance of energy by the birth of heat and light; and all energy seems to exhaust itself in its acts of "love under will", losing its higher purpose and slipping even lower down the scale. Were this partial view the truth, there would be no answer to the question "what started that highest form of energy?" The Book of the Law states clearly the truth, in order that, when men succeed in finding the truth, they may know something of the nature of Aiwass, and admit his right to make a law for mankind. When the problem is solved, if not before, the details of the truth will be found expressed in cipher in the text of the Book.

The Old Comment
Purple — the ultra-violet ("v." 51), the most positive of the colours.
Green — the most negative of the colours, half-way in the spectrum.
The Magical Image of Hadit is therefore an Eye within a coiled serpent, gleaming red — the spiritual red of HB:Sh and not mere Fire — at the apex of the Triangle in the half circle of Nuit's Body, and shedding spangles as of the spectrum of eight colours, including the ultra-violet but not the ultra-red; and set above a black veil, as the next verse indicates.

The New Comment
There is a certain suggestion in this 'purple' as connected with 'eyesight', which should reveal a certain identity of Hadit with the Dwarf-Soul to those who possess – eyesight!