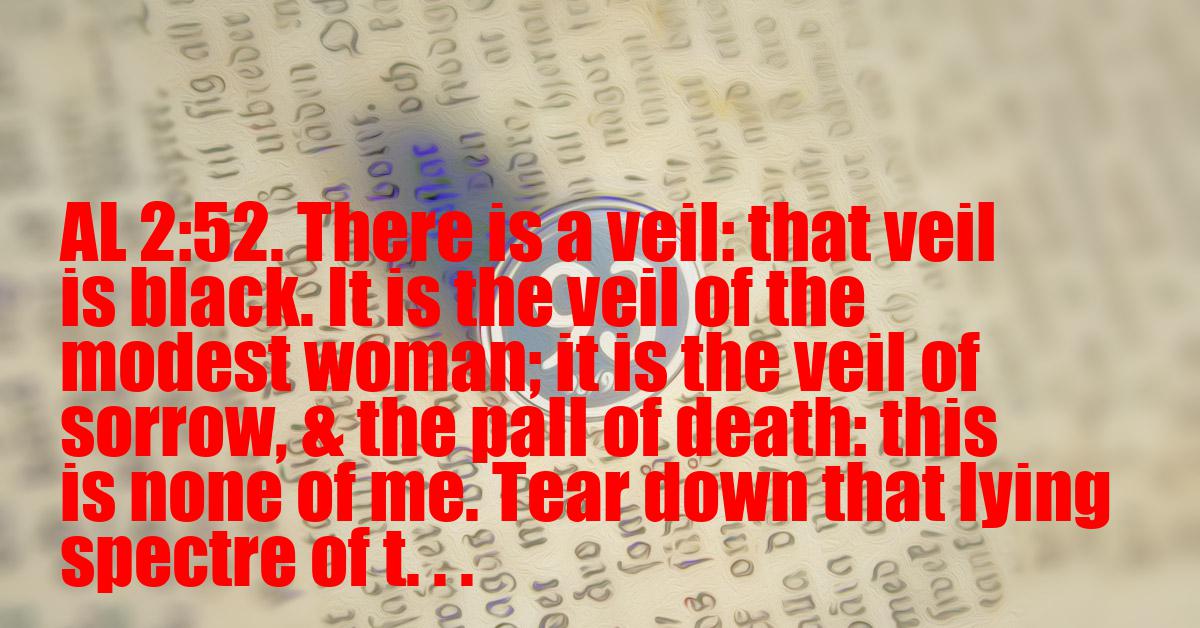 There is a veil: that veil is black. It is the veil of the modest woman; it is the veil of sorrow, & the pall of death: this is none of me. Tear down that lying spectre of the centuries: veil not your vices in virtuous words: these vices are my service; ye do well, & I will reward you here and hereafter.

The Djeridensis Comment
From light we turn to the absence of light. Yet this is not real. It is a veil. This veil is not in the order of nature. It has been made by shame and fear, by trying to shut off all that is true and real from the soul. To resist change and to defy nature, this is the key of the evil Magic of the Black Brotherhood, whose idol is the modest woman. Her veil is sorrow and death. We of Thelema worship Nuit: "all that may be" adored by "all that is." Her forms are without number; and in each she bestows herself freely upon any and every soul that desires Her. Thus Her priestess on earth is the Scarlet Woman, the Whore of the Beast who gives all she can to all that will. Her every act invokes change which is life. On the other hand, the "modest woman" conceals herself and denies herself. She is afraid and ashamed of herself — afraid and ashamed of all men. She dreams that something may happen to her, and thus lies stiff and stark in death even at the height of her youth. This verse of the Book of the Law is the final challenge to the past. The Angel strikes his spear with the sharp end upon the craven shield of the coward and slave who lurks behind the mask of a Master, of a phantom, a scarecrow, set up by him to frighten the winged songsters of freedom from the fertile fields which are their own by right. Until this verse, it might perhaps have been within the power of some subtle sophist to explain away the verses of this book. Here Aiwass leaves no shadow of doubt. He says with utmost clearness "Tear down that lying spectre of the centuries: veil not your vices in virtuous words: these vices are my service; ye do well, & I will reward you here and hereafter."
The Angel does not even deign to show that what pious people call vices are in fact virtues: that is, tokens of manhood; or that vices means "flaws." He uses these two words in their vulgar sense. To dare the world to a duel to the death. He does not merely tempt mankind to do what Christians call evil, he says that these vices are of the priesthood of Hadit, means to invoke Him, ways of coming to truth, ladders to climb to Godhead. We shall not be punished for doing wrong, as they call it. Both here and hereafter our reward is sure.
Yet more. The veil is vile. We must not, as the master class of men do now, enjoy ourselves in every way, and pretend with utmost care that we do nothing of the sort. We must take pride in our pleasure. We must be shameless and frank. Since all that is, is God, the only error is to hinder God from being himself or doing his will, or unveiling his truth.

The Old Comment
Set above a black Veil.
This verse is very difficult for anyone, either with or without morality. For what men nowadays call "Vice" is really virtue — virtus, manliness — and "Virtue" — cowardice, hypocrisy, prudery, chastity, and so on are really vices — vitia, flaws.

The New Comment
Mohammed struck at the root of the insane superstition of tabu with his word: "Women are your field; go in unto them as ye will". He only struck half the blow. I say: go in unto them as ye will and they will. Two-thirds of modern misery springs from Woman's sexual dissatisfaction. A dissatisfied woman is a curse to herself and to everybody in her neighbourhood. Women must learn to let themselves enjoy without fear or shame, and both men and woman must be trained in the technique of sex. Sex-repression leads to neurosis, and is the cause of social unrest. Ignorance of sexual technique leads to disappointment, even where passion is free and unrestrained. Sex is not everything in life, any more than food is: but until people have got satisfaction of these natural hungers, it is useless to expect them to think of other things. This truth is vital to the statesman, now that women have some direct political power; they will certainly overthrow the Republic unless they obtain full sexual satisfaction. Also, women outnumber men; and one man cannot satisfy a woman unless he be skilful and diligent. The New Aeon will have a foundation of Happy Women: A Woman under Tabu is loathsome to Life, detested by her fellows, and wretched in herself.
The student should study in Liber Aleph and Liber 418, the connection between 'modesty' and the attitude of the "Black Brothers".