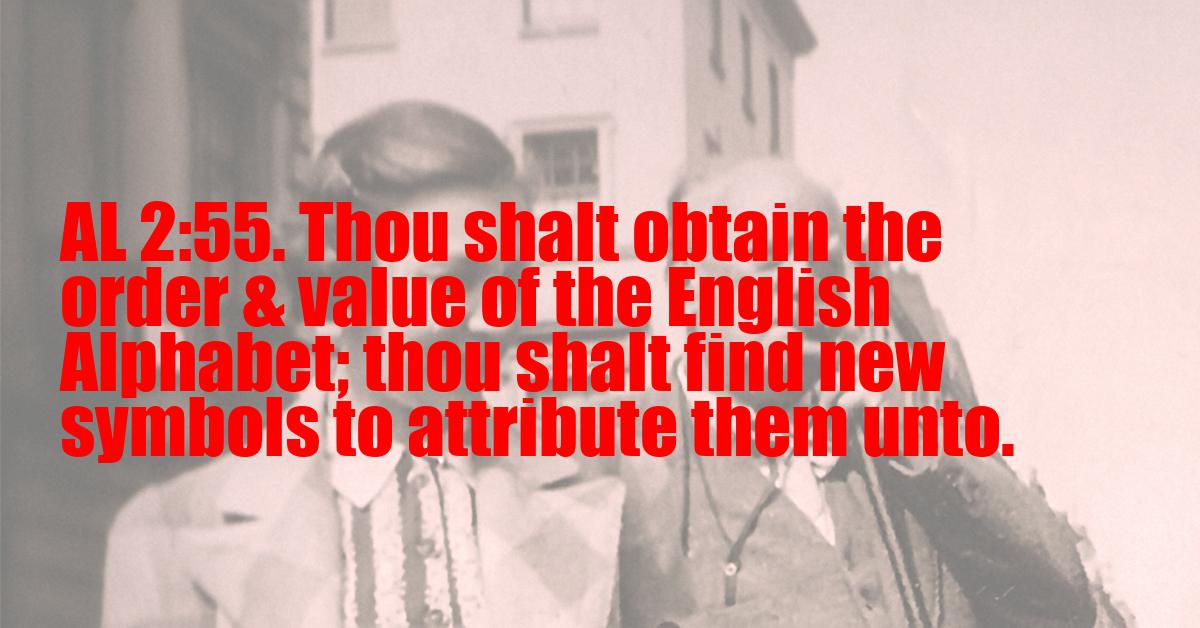 Bethsheba Comment:
Besides the usual order of the Hebrew alephbet, there is also a secret Priestly order which was used to arrange the Book of Genesis. If we arrange the Roman Alphabet according to the Priestly order then the letters (and digraphs) proceed in this order:

See II:16 for the Tarot arranged in this order.
Letters may have the value of their place in the order of the alephbet, or according to their gematria value which is thus;

Thou shalt obtain the order & value of the English Alphabet; thou shalt find new symbols to attribute them unto.

The Djeridensis Comment
Next, he set me a fresh task. I was to assign values to English letters of some such order as obtains in Hebrew. I deal fully with this matter elsewhere.[36]

LIBER TRIGRAMMATON
sub figura XXVII
THE BOOK OF THE TRIGRAMS OF THE MUTATIONS OF THE TAO WITH THE YIN AND YANG..

[ I ]
Here is Nothing under its three forms. It is not, yet informeth all things.
Narrowed breath. Represents concentration, including aspiration.

[ L ]
Now cometh the glory of the Single One, as an imperfection and stain.
Passive undulation, without effort, unchecked.

[ C ]
But by the Weak One the Mother was it equilibrated.
Vide S. and K.

[ H ]
Also the purity was divided by Strength, the force of the Demiurge.
Forcible addition of pure breath to other sounds. Represents effort.

[ X ]
And the Cross was formulated in the Universe that as yet was not.
Combines K & S.

[ T ]
But now the Imperfection became manifest, presiding over the fading of perfection.
The sexual onslaught. A less responsible form of D.

[ Y ]
Also the Woman arose, and veiled the Upper Heaven with her body of stars.
When distinct from I, dignifies the vowel to which it is prefixed.

[ P ]
Now then a giant arose, of terrible strength; and asserted the Spirit in a secret rite.
As to B as K is to (hard) G. Bursting of a bud as against that of a fruit.

[ A ]
And the Master of the Temple balancing all things arose; his stature was above the Heaven and below Earth and Hell.
Open unmodulated breath. (ah.)

[ J ]
Against him the Brothers of the Left-hand Path, confusing the symbols.
They concealed their horror [in this symbol]; for in truth they were

[ W ]
The master flamed forth as a star and set a guard of Water in every Abyss.
When distinct from U represents the operation of choice. 'U" does this to some extent. (Will, word, way.)

[ O ]
Also certain secret ones concealed the Light of Purity in themselves, protecting it from the Persecutions.
The breath concentrated and directed. As to I as magic is to mysticism.

[ G ]
Likewise also did certain sons and daughters of Hermes and of Aphrodite, more openly.
(hard) Opening as if to devour. (Soft?)

[ Z ]
But the Enemy confused them. They pretended to conceal that Light, that they might betray it, and profane it.
An irritated or excited form of S, emphasizing elements of anger and alarm.

[ B ]
Yet certain holy nuns concealed the secret in songs upon the lyre.
Bursting forth. Phallus and Vulva. Kissing.

[ F ]
Now did the Horror of Time pervert all things, hiding the Purity with a loathsome thing, a thing unnameable.
Compound of P & H.

[ S ]
Yea, and there arose sensualists upon the firmament, as a foul stain of storm upon the sky.
Devence, warning, etc.

[ M ]
And the Black Brothers raised their heads; yea, they unveiled themselves without shame or fear.
The Will to Die.

[ N ]
Also there rose up a soul of filth and of weakness, and it corrupted all the rule of the Tao.
The vibration which includes Life and Death as complementary Curves.

[ E ]
Then only was Heaven established to bear sway; for only in the lowest corruption is form manifest.
Softened, but otherwise unmodulated breath.

[ V ]
Then were the waters gathered together from the heaven,
Conscious male will. Manhood, strength, truth, righteousness, immortality, integrity.

[ K ]
Opening as if startled.
And a crust of earth concealed the core of flame.

[ D ]
Around the globe gathered the wide air,
The paternal vibration.

[ U ]
Like O with added refinement and a tinge of melancholy. O is completely self-confident. (Vulva).
And men began to light fires upon the earth.

Therefore was the end of it sorrow; yet in that sorrow a sixfold star of glory whereby they might see to return unto the stainless Abode; yea, unto the Stainless Abode.