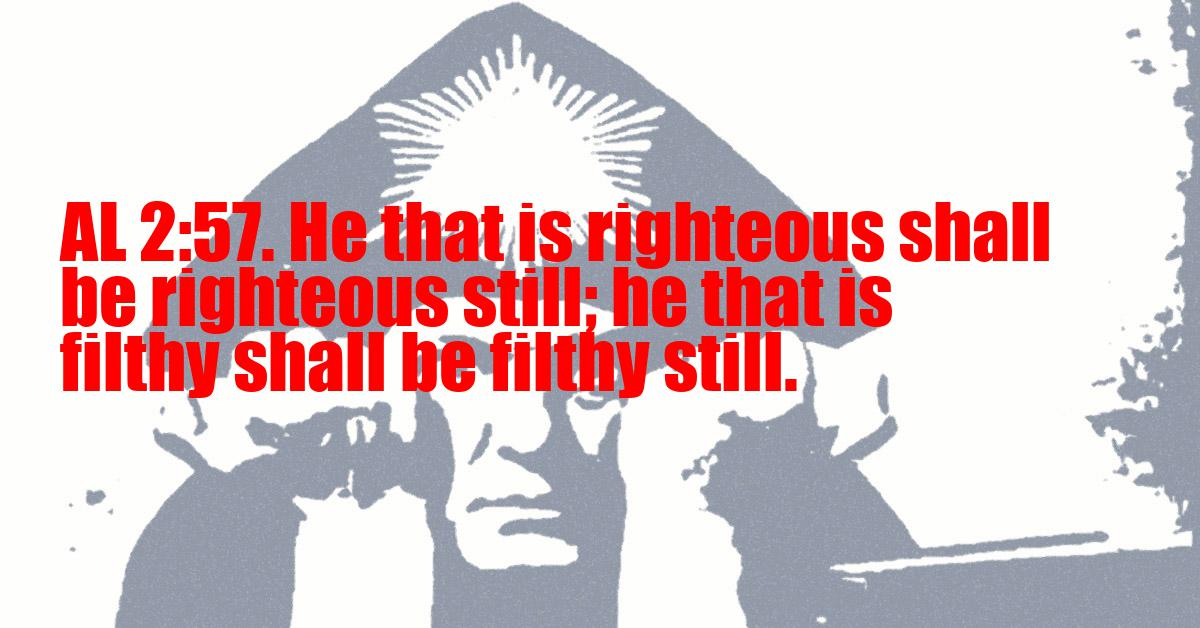 The Djeridensis Comment
(57-58.) "People who shift their point of view," the Angel repeats, "are not truly themselves." Though each event is change, these changes form a closed curve so that their sum is zero. I have dealt with this subject fully in other writings. The essence of the doctrine is that things are stable only by virtue of their constant change, which is life. To cease to change is to die, which is the one real change that can occur. When it occurs, it proves that true life was never there.
This doctrine is at once applied to the question of the Kings and the slaves. The Angel explains that there are two types of men — the slave can never rise, the king can never fall. Should such things seem to take place, it is a sign of some disguise; the essence of the man, if he be in truth a man, is always the same. It is a point of view which never alters really, though each fresh fact brings it more fully into light. I am told of one case which must not deceive me. I must not assume that a man who seems a beggar is one. He may be a King whose pleasure is to disguise himself. He can, of course, resume his crown and sceptre when he tires of his sport, whereas a beggar has not the means to pretend to be a king. The point of this is that I may find it needful to judge the claims of such men as I may meet; and Aiwass here assures me that I shall find it easy to detect sham kings; but warns me against scorning those who do not flaunt their virtue.

The Old Comment
A quotation from the Apocalypse. This God is not a Redeemer: He is Himself. You cannot worship Him, or seek Him — He is He. And if thou be He, well.

The New Comment
This, and the first part of the next verse demonstrate the inviolability of Hadit our Quintessence. Every Star has its own Nature, which is 'Right' for it. We are not to be missionaries, with ideal standards of dress and morals, and such hard-ideas. We are to do what we will, and leave others to do what they will. We are infinitely tolerant, save of intolerance. It is not good, however, to try to prevent Christians from meddling, save by the one cure: The Christians to the Lions'.
It is impossible to alter the ultimate Nature of any Being, however completely we may succeed in transfiguring its external signs as displayed in any of its combinations. Thus, the sweetness, whiteness, and crystalline structure of sugar depend partly on the presence of Carbon; so do the bitterness, greeness, and resinous composition of hashish. But the Carbon is inviolably Carbon. And even when we transmute what seem to be elements, as Radium to Lead, we merely go a step further; there is still an immutable substance – or essence of Energy – which is inevitably Itself, the basis of the diversity.
This holds good even should we arrive at demonstrating Material Monism. It may well be – I have believed so ever since I was fourteen years old – that the elements are all isomers, differentiated by geometrical structure, electrical charge, or otherwise in precisely the same way as ozone from oxygen, red from yellow phosphorous, dextrose from laevulose, and a paraffin from a benzene of identical empirical formula. Indeed, every "star" is necessarily derived from the uniform continuity of Nuith, and resolvable back into Her Body by the proper analytical methods, as the experience of mysticism testifies. But each such complexs is none the less uniquely itself; for the scheme of its construction is part of its existence, so that this peculiar scheme constitutes the essence of its individuality. It is impossible to change a shilling into two sixpences, though the value and the material may be identical; for part of the essence of the shilling is the intention to have a single coin.
The above considerations must be thoroughly assimilated by any mind which wishes to gain a firm intellectual grasp of the truth which lies behind the paradox of existence.